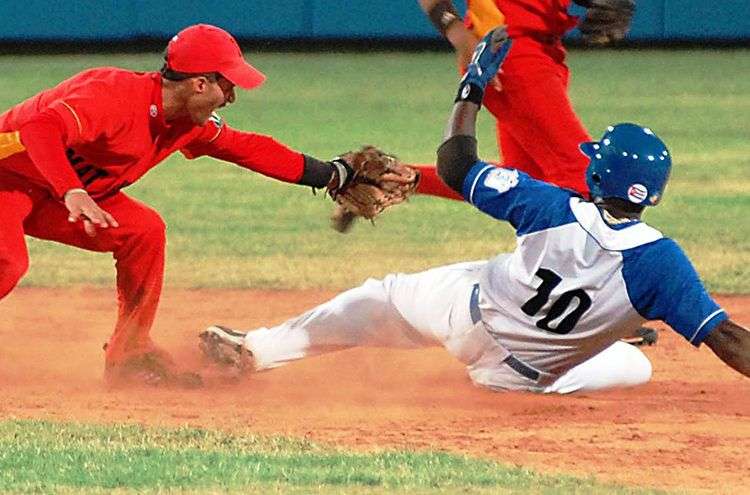 The second phase of the 54th National Baseball Series heads to its end. Slightly more than 20 games remain for the qualifying stage to come to an end, a very short tour, which will last very few. And it is not yet clear what teams will be the animators of the playoffs. Matanzas and Granma seem already having got their tickets (although they have nothing guaranteed mathematically) but the other two seats to the playoffs are still in dispute.

After the impasse by the Caribbean Series, the tournament has entered a kind of acute hipocondritis. Suffering day after day, that beyond the strong contention of the sides to qualify, have affected and caused several malfunctions to the event.

A lot of injuries have flooded the squads that have seen many of their main players watching the games from the stands, indiscipline which have resulted in sanctions, players who have decided to leave their teams to go abroad (that is not news), the disenchantment of Pinar del Río with its head coach and a number of notable absences have weakened the team, and the news that Cepeda is already training in Japan are some items disturbing the regular fans of the tournament.

However , one that has withstood the onslaught of bad luck has been Victor Mesa´s Crocodiles. Its roster has bled, but they are still at the head of the standings. They lost their catcher, second baseman, shortstop (they all decided to leave the National Series to try their luck in other leagues) and cling to top spot, few teams could resist such hardness.

Matanzas (43-26) now sleeps embraced with Granma, which has tied with them on top of the standings thanks mainly to their powerful hitters. The team coached by Carlos Martí scares, they have a powerful line-up that really intimidates. Although their pitching staff does not give many guarantees, they have found a balance to compensate the offensive lead by Santos, Despaigne, Samon, Guerra and Cedeño.

Industriales (39-30) appears then in the third seat, four games behind the lead ers. The Blues of Havana have had a big spike in the second stage, which has earned them to settle at a privilege position. But even though they now exceed the margin of qualification, they can not be trusted, because there are some teams progressing at huge strides at their back.

This compact group marching after the footsteps of the lions of the capital is lead by Isla de la Juventud and Ciego de Ávila (38-31), which are at only one game of difference, but do not think that the list ends there, Pinar del Río (37-32) is still fighting for that last ticket to playoffs and Artemisa (35-34), although with a little less of options, still dreams of a recovery. The bottom of the standings corresponds to Holguin (31-38) which only goal is to complete the official schedule.

Offensively, Granma has taken all the headlines and is individually heading the main stats of the game. Thus, in recent days, the slugger Alfredo Despaigne has become the leading hitter of the contest with an average of .366 and also commands in slugging with .676. Another two players from this squad, Roel Santos and Urmaris Guerra have offensively highlighted. The first leads in runs scored with 62, while the latter commands in homers (17) and RBIs (59).

Meanwhile, among the pitchers, Freddy A. Alvarez has the best ERA with 1.63. No one has won more games than Granma´s starting pitcher Lazaro Blanco (12), Artemisa´s José A. García commands the saves with 18 and lefty Darien Núñez is the leader in strikeouts (90).

Yosmell Calderon or A dancer from another world