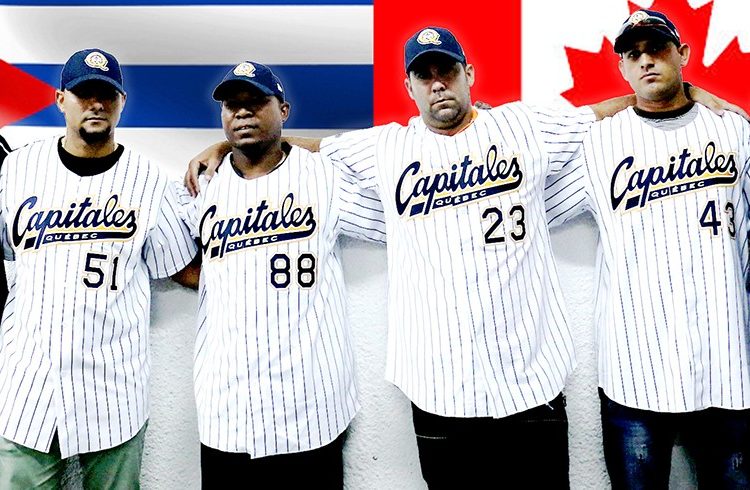 Three Cuban players will join the Canadian American Association of Professional Baseball (Can-Am League) -an independent baseball league in Canada-, benefiting from a new government policy that now allows Cuban players to sign contracts with professional teams outside the country.

These players’ goal there is to help Québec Les Capitals win the title they lost last year, when the Rockland Boulders became Division Champions.

The four Cubans are all seasoned players, with at least a decade of action in the national series. Additionally, three of them -Bell, Manduley and Jimenez- have repeatedly made Cuba’s national team, and have taken part in important international competitions, where they have captivated scouts and executives of professional teams from other countries.

“We’ve been to Cuba several times, and we’ve also followed the careers of these players in the national team. We’re very pleased with the quality of their game, and with their personal qualities; they are good people,” said Patrick Scalabrini, Les Capitales head coach, whose squad will strengthen with these contracts.

“We have a winning tradition,” he added, “We’ve been champions six times, five of them consecutively from 2009 to 2013. We expect to regain our winning ways with this injection of Cuban blood.”

“I’m an admirer of Cuban baseball, a fan indeed. I keep track of statistics, and I follow the games online. That helped in the selection process, but the people here gave me some clues too. For instance, it was from a taxi driver that I learned who the best shortstop in the country was. And of course we also took into account the suggestions of coaches here, because they are the ones who work with the players every day.”

After signing the contract, Scalabrini said last year some of the teams in the Can-Am league were hesitant about hiring Cubans, mainly due to the excessively long negotiation process, but Yunieski’s performance left a very good impression of the quality of Cuban baseball.

“Other teams are not as familiar as we are with all the steps of the recruitment process, which may be the biggest obstacle for them to decide to hire Cubans. But I’m sure that as soon as they see these guys in action, their interest will grow,” the coach said.

For his part, Les Capitals President Michel Laplante said he was very happy about this big step in the negotiations with Cuba, which has even allowed for Quebecer children came to Cuba, motivated by the figure of Yunieski Gourriel and his performance in the Can-Am League.

“Cuba is a very popular cultural destination among Canadians, and now the interest in Cuban sports could also help overcome any barriers that may exist,” said the manager, who thanked the confidence of the Cuban Baseball Federation and the National Institute for Sports and Recreation (INDER) in this beautiful project.

Laplante also praised the quality of Cuban baseball, and said that the presence of these three men in Canada should boost interest for Cuban players.

The Can-Am League is not top level, but it certainly represents an opportunity of development for Cuban baseball. For players, it is a chance to play abroad without having to abandon their country for good –as has happened so far with the ones who go to play for the MLB.

The Cam-Am League operates in cities which are not directly linked to MLB franchises.

“Our league is independent, but we have excellent relations with the MLB. We respect each other’s contracts. We don’t go for players who are on MLB contracts and neither do them,” said Scalabrini.

He added that taking part in the games that Quebec Les Capitals will be playing in the United States shouldn’t be a problem for the Cubans.

“We’ll be opening the season with ten consecutive games in the United States. We don’t think there will be any kind of problems with the visas. Last year, it was easy to get one for Yunieski; it was even easier than getting visas for our Dominican players,” he said.

The four Cuban players will depart for Canada between May 7 and 9, to start a process of acclimatization and training prior to the beginning of the regular season on May 21, which will run through September 15.

In 2014, the league was made up of four teams only. The leaders were the Rockland Boulders (56 wins and 40 losses), followed by the New Jersey Jackals (55-41), Québec Les Capitals (46-50) and Trois-Rivières Aigles (37-59). In the finals, the New Jersey Jackals started with two wins, but the Rockland Boulders managed to win four games in a row and became the champions.

The league will be expanding this year to include eight teams: the Rockland Boulders, the New Jersey Jackals, Quebec Les Capitales, and Trois-Rivières Aigles will be joined by Garden State Grays, Ottawa Champions, Sussex County Miners and Shikoku Island.