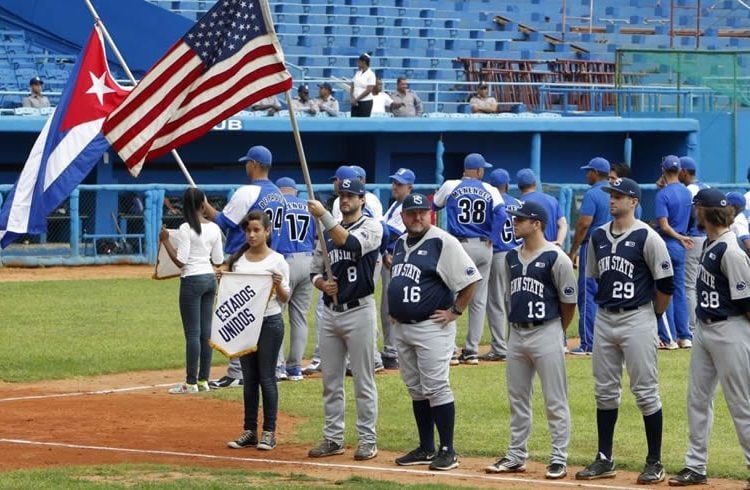 The baseball team of Pennsylvania State University travelled to Cuba to play friendly games with local teams, attending an invitation from the Center for Studies on Jose Marti.

The delegation’s press officer Judith Clyne spoke to OnCuba prior to the first game against Industriales – Havana’s team – at the Latinoamericano Stadium:

“We are very grateful for this invitation, and for the way Cubans have welcomed us. We are not here just to play baseball; we are here to get to know Cuba and its people. We know our visit can help to bring our countries closer and build a better relation in the future.”

The game vs Industriales was scheduled for Sunday, but it had to be rescheduled due to the rain.

“The cancellation of the game put some pressure on the program of activities we had, but we expect to be able to do everything we had planned for,” said Clyne.

The students’ program of activities includes visits to places of cultural relevance in Havana, as well as lectures and seminars in different universities in the western part of the country.

They lost their first game against Industriales, 2 to 1. It was a tough game, where the pitchers were the stars.

By the end of the game, Industriales’ coach Javier Mendez told OnCuba: “It was a beautiful game, tight until the end. It’s good to have the chance to play these games, because it gives us an idea of the level of the baseball played at American universities, which is the main pool for the MLB.

Rob Cooper, the manager of the visiting team, said that the important thing is not the game or the results: “What’s really important here is that our flags fly together and that our students get to take part in the academic and cultural exchange. They will be able to share these experiences when they’re back home.”

Only a few people attended the game, probably due to the weather conditions that day. But even then the Nittany Lion’s first base, Tyler Kendall, earned the applause of the local fans when he stopped a dangerous hit that was headed to the right field.

“Baseball is a big part of Cuban culture, and Cubans are talented players,” said Kendall.

“Cuba is a great country,” added Austin Riggings (center field), “We wanted to have a taste of their baseball.”

The program of the Pennsylvania team also included a game against the team that currently holds the national league title, Ciego de Avila, which is also the leader of the current season; as well as games against Matanzas and Mayabeque, both at the respective stadiums of those teams.

Challenging “Time-warp” Cuba: How Cuba connects to the 21st Century

Cuba: A window that is opening