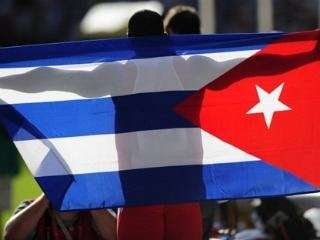 Last Monday December 10  the named of the top Cuban athletes of 2012 were anounced and it was something like the bell that announces the imminent end of the sports season in the Caribbean archipelago and the proximity of Christmas and New Year celebrations. Cuba acknowledged all the heroes who pleased sport fans with their outstanding performances in the international arena.

The laurels were given to wrestler Mijaín Lopez and judoka Ortiz Idalys who were by far the most important athletes of the Cuban sports movement this year, in both sexes. Odalys´ election was indisputable but Mijain had a hard opponent in the "gunman" Leurys Pupo who also enjoyed tens of preferences in the ratings, thanks to his London 2012 title in men’s 25 meters rapid fire pistol.

Mijaín, Olympic champion in London, 2012, in the 120 kilograms division of wrestling, won 56 percent of the votes, or what is the same, 73 for 131 ballots, and so he won his sixth career nomination for Best Sportsperson of the Year in Cuba , the fourth in a row since 2008 .

This huge man from Pinar del Rio province, tow-time Olympic Champion, was born undoubtedly to win. It’s been a while he etched his name with golden letters in Cuban sports history alongside legends such as Javier Sotomayor, Omar Linares, Mireya Luis, or late Teofilo Stevenson.

If Mijaín´s performance was awesome, what can we say about Idalys Ortiz´? She also won the gold in the Olympics, with the plus of having beaten spectacularly the greatly-renowned Chinese Tong Wen, who had won all the tournaments she had participated in since 2003.

The judoka (+ 78 kg ) was the overwhelming winner without the shadow of a rival, she simply "crushed" her opponents in the ratings, despite competing against world class athletes, as pole vaulter Yarisley Silva (Olympic runner up).

From the secondary prizes, the most important was granted to the 18 years old boxer Robeisy Ramirez, who catapulted Cuba in the medal count of the Olympics with his unexpected gold medal.

As Best Athletes in team sports were awarded volleyball players Wilfredo Leon and Yanelis Santos while boxing was distinguished as best individual sport and men’s volleyball was the best team.

Baseball, right now in the middle of a love-hate relationship with all Cubans, was the most prominent team sport, mainly due to the resurrection of the Cuba-United States "friendly matches ", the product of a hard work by the Cuban Baseball Federation.

The date of the gala awards ceremony remains unknown, however the most optimistic people dream of its early realization, although it continues to be a fantasy.

City on the brink of its bicentennial