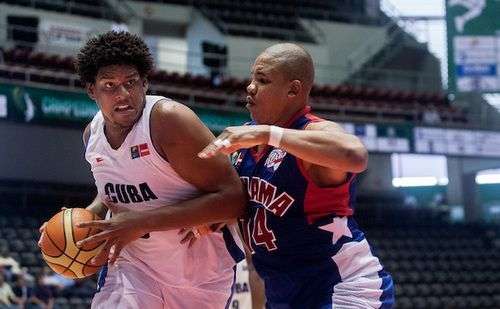 After losing to the Dominican Republic on Thursday (66-75) on the match for the bronze medal, Cuba finished fourth in the 2014 Centrobasket, away from the podium and unable to qualify for the 2015 Pan American Games in Toronto.

This was the seventh consecutive time that the Cuban players go without medals in this kind of events, adverse streak extending from 2001 after the national team dominated the 1995, 1997 and 1999 editions.

The team coached by Daniel Scott accumulated three wins in Mexico and as many losses, two of them against the Dominicans; it is a fourth place, seen closely, that deserves more praise than criticism, even though criticism will be essential for the growth of a team that showed potential to dream.

Before making any assessment is worth remembering some peculiarities. First, we are talking of a team whose members have had their competitive ceiling in the battered Cuban Superior Basketball League, a competition that dazzled by its quality in the last decade of the last century, and today is just the memory of crowded and brilliant plays games.

Moreover, the team fails to recover from the constant desertions, in Mexico it lost another two, something that forced it in the last edition of Centrobasket to play most of their games with only two men on the bench and took them to fall to the eighth place.

You have to add to it, despite the policies adopted by INDER in September 2013, that no Cuban basketball player has achieved resorting to such benefits, even though some of their colleagues (independently), play today in South American leagues with prominent results.

That said, little can we demand from these men, a direct result of their specific conditions and more limited by their inexperience due to the same lack of quality. In any case, we may require them seriousness and attitude on the court, but ask them to win is more complex.

Moreover, the Mexican raid was not a disaster, as the Cubans got their “express” ticket to the Central American and Caribbean Games 2014 in Veracruz, and the one that will take them to the Pre-Olympic Qualifier in Rio de Janeiro 2015.

In the case of collective action is worth looking at the statistics accumulated by the disciples of veteran Daniel Scott in six matches in the city of Tepic, capital of the state of Nayarit.

With an average age of 26 years, Cuban had one of the youngest rosters in the regional competition.

On offense, Cuba did not have a high performance, as its men scored just 46.5% of the shots from the middle and short distance; from outside the area they improved their marksmanship with 33% effectiveness. This led to average 70.16 boards per game; but their defense allowed 70.6. Put in clean, Cuba scored 421 points in six games and allowed 424.

From the free throw line, Cubans were below the average of the event (63.6%) and thus failed to capitalize on key situations of the defining games.

Under the board they showed the maximum power by leading rebounding, getting 217 rebounds, seven more than the Mexican champions. They stole 39 balls and had 16 blocks, nine of them to the account of the Santiago player Javier Justiz, 21 years old and 2.10 meters tall.

But it was not exactly tall men who stole the spotlight, but Osmel Oliva (27 years old, 1.78 meters tall), who was the most complete by Cubans to be included in the top ten of several statistical departments and leading Cuban offensive with 83 points.

Meanwhile, Yoan Luis Haiti was again the team’s top rebounder with 44, followed by the Oliva with 31. Meanwhile, from the long range, William Granda scored three triples, seconded by Haiti (7) and Oliva (6) .

Beyond the feeling of dissatisfaction, this Centrobasket 2014 revealed shortcomings and also the potential of a young Cuban team full of figures that need to be polished with higher level games, which will be impossible as long as they have the domestic competitions as their ceiling.

But, on the other hand deficiencies were visible that have nothing to do with playing abroad. Among many others the bad dribbling, disorientation in the game without the ball, lack of communication on the court, slow transitions, passive on offense and defense, wretched free throw … all of which can be supplemented with two keywords in any sport: discipline and training.

Amen to this, it is necessary to clarify that the result is good. Cuba won the games that were available to them and lost to teams already qualified for the Basketball World Cup; it played at a high level, despite the errors-and surprised many by advancing to the semifinals.

Is there much to do yet? No doubt, for these players to turn into something like the Cuban teams that dominated Central America in the 90s, it takes much more than regional tournaments and three months of the Superior League. Yes, Nayarit showed that the raw material to rebuild a competitive and capable workforce to dream big is there.

The best Cuban located in different categories in this Centrobasket 2014 were: