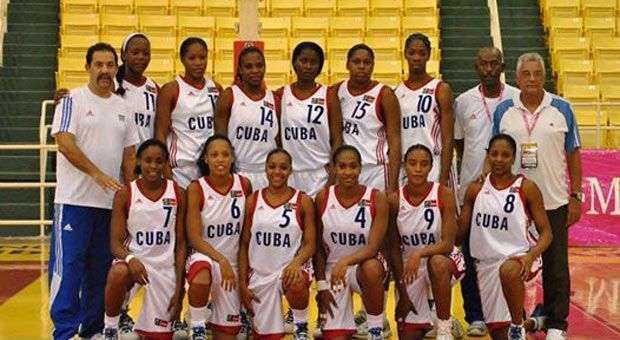 As excellent we can describe the debut of our basketball girls in the FIBA Americas Championship for Women, which began today in Xalapa, capital of the Mexican state of Veracruz. It was a comfortable win over Jamaica with a 75-51 score, in the opening round of this event which awards three berths of the world championships to be held in Turkey next year.

Located in group A, the Cubans also face national teams from Chile, Venezuela and Canada, in that order. The B consists of Brazil, Argentina, Puerto Rico, Dominican Republic and the hosts of the tournament. In the semifinal teams that occupy the top two positions on both keys will face each other, and only the medalists will be in September 2014 in the Ottoman nation.

Let’s look at the numbers of the game. After losing by the minimum the first quarter 21-22, the Cuban overwhelmed at conga steps 22-4 in the second, including a 15-0 streak. That way they went into the break with ease, winning by seventeen points, 44-27. The other half had the reggae girls reducing the lead to ten points, until ours again stepped on the gas and fulfilled the task finished without any complications.

Individually the main scorers for Cuba were Yamara Bitter, 23 points, followed by Gelis Oyanaisy with 15. This last had perfect afternoon from the perimeter to score the three triples she tried. For Jamaica, Shenneika Smith and Sasha Dixon contributed with 12 and 11 points respectively. A curious fact is worth mentioning that the director of this selection, Simone Edwards, also appears as a player. In fact today she was present on the court a lot of minutes with six points and five rebounds included. Edwards for several seasons was one of the leaders of the WNBA Seattle Storms club.

Marlen Cepeda was immense under the board by capturing eleven rebounds, six of them offensive. Clenia Noblet got eight, on her return to the national team after becoming a happy mom. Oyanaisy had a great game, besides the fifteen points, had four rebounds, three assists and a block. A very interesting fact that shows the optimal state of the team as well as the able guidance of coach Alberto Zabala, is that the twelve girls had the opportunity play in this game.

In the Cuban collective order they closed with a 38.1% success rate on field goals, five triples in thirteen attempts (38.4%), and from the free throw line they averaged 78.2%.

The first step has already been taken. The favorites of the event are Brazilian, Canadian and Argentineans alongside ours. One of them, therefore, will be left out of the upcoming world basketball tournament in Turkish lands. The progress that the Cuban team has experienced, the acceptable preparation, and high degree of motivation of the girls and the technical group, allows their fans to dream big. Oncuba will provide coverage from their Facebook page, to each of the games of the selection until September 28 when the tournament wraps up.