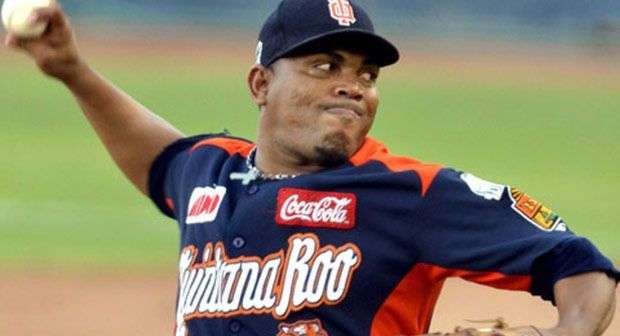 In the coming months the Japanese professional baseball circuit will possibly count on a new Cuban samurai. This possibility was hinted by former Industriales pitcher Amauri Sanit, in an exclusive interview for the program “Voces del Deporte” on ESPN Radio Miami. In a review of the dialogue, which is contained in the digital site Cronodeportes, he said: “… going to play in Japan is now in my mind. There have been talks, I already signed with a company … interested in take me there and maybe the paperwork will start in November. “On Japanese land is currently Matanzas´ Michel Abreu, who has had a dream season wearing the uniform of NipponHam Hokkaido Fighters.

At age 34, Sanit is living his best moment in professional baseball. A few weeks ago he was named the best pitcher of the Mexican League (LMB by its Spanish acronym); co-leader in wins with 12, he also had the second lowest ERA of the tournament (3.27), and his 103 strikeouts placed him third in that department. It was also worth saying he finished second in innings pitched (135), and showed an exquisite control, averaging just 2.1 BB per game. This was his second year in the LMB, both times play ing for Quintan Roo Tigers.

His entry into professional baseball dates back to 2008 when he was signed by New York Yankees organization. Three years later he materialized a dream of many Cuban players, which only a few have actually managed to do: playing for the top team of the Big Apple. After his debut as reliever in December 2011, against Kansas City and pitching almost five innings with three ER, Sanit had a short life with the Yankees, in which he could only accumulate three more innings .

In this connection, in the interview he told: “Since I was in AAA I had an elbow injury, which got swelled and really hurt me, and when I was called to the Majors, I really could not endure the pain, so I underwent a surgery and for that reason they let me free.” In the end, it was a short stay but enough for his name to appear among the chosen ones who have had the old Yankee Stadium as home. A peculiar data: the numbers he wore were 39 and 53; the latter was also used by another Cuban player a year earlier: Pinar del Rio´s first baseman and outfielder Juan Miguel Miranda.

Blues and Greens, a classic of western Cuba. Do you remember that fateful night for Havana in 2002, in the last semifinal playoff game between Industriales and Pinar del Rio? To one out of victory and that most of the 55 000 people who packed the Latinoamericano Stadium to begin making shake its foundations. Easy groundout to second base… error by Enriquito Diaz, then Daniel Lazo hit a spectacular homer over the fence of the right field on a 93 mph fastball and a story that upsets its events. Do you know who the pitcher was who endured all that stress from the box? The protagonist of this story: Amauri Sanit.

In addition to this sad end experience, Sanit, for seven seasons, had some outstanding stats in Cuban national baseball series. As Industriales closer, he saved 58 games, plus getting 25 wins and the same number of losses. He averaged 6.2 strikeouts per game, 514 innnings and his opponents batted for .256.

The professional baseball universe has now several Cuban stars that shine with their own light in dissimilar leagues and circuits. One of them, our today’s hero, remains committed to continue giving the best of him, now in more distant lands. From Oncuba we wish him luck in his new purposes and we will be watching him.