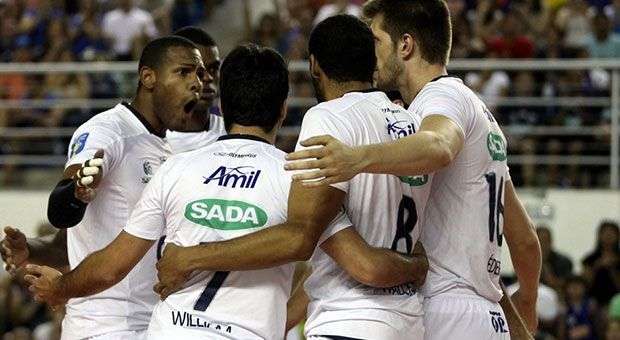 While the Cuban Volleyball Federation keeps, as its president Ariel Sainz weeks expressed ago, its irrational refusal to dialogue with players who play professionally outside the island, volleyball fans continue enjoying the relevant performances of these stars in courts of several nations.

This weekend two regional club tournaments wrapped up, and in both the Cuban talent was present. In Brazil the South American Club Championship took place, won by the local team Sada Cruzeiro , where Cuban Yoandy Leal plays. Parallel in time, Tunisia hosted the Arab Volleyball Cup. There eight athletes from Cuba saw action, among them Raydel Corrales, included in the All Stars of the event.

A great game for the discussion of the title was the epilogue of the South American tournament, held at the Arena LIVE in Belo Horizonte. In the final match the Sada Cruzeiro , current World Club champion, faced the Argentinean franchise UPCN , the regional defending champions. The latter won the two first sets with identical 25-23. Then a legendary Brazilian comeback began, in which the support of the public was a key factor. They garnered the three next sets with score of 25-20, 25-19, 18-16 .

This was the second time that the Sada Cruzeiro reigns in the South American Championship after its victory in the 2012 version held in Chile, and in which they beat in the final match the same opponents of this year.

Exclusive for OnCuba, Yoandy Leal, one of the architects of the win, said: “It was a very tough final from start to finish. The UPCN team went well from the start. They took the initial sets, but between the support of our fans and the motivation that we had, we got the win. “

“Individually I think I had a good tournament, I think I’m in a very positive phase in my career and I hope to continue at that level for long. In May, the battle will be to revalidate the title of world champions as a club, here at home. The mentality of the team is focused on optimally preparing to repeat the feat, we will face a competition against great selections. “

Sixteen clubs participated in representation of twelve countries in the Arab Volleyball Cup. The presence of Cuban volleyball players was remarkable. In Qatar’s Al Arabia there were Jorge Gonzalez, Hiroshi Centelles and Sirianis Hernandez. In the Ittihad Misurata team, from Libya, there was another trio: Raydel Corrales, Yoendry Kindelan and Juan Diaz. Finally Joao Girón and Osmel Camejo played for the Lebanese representative Ezzahra.

According to the Out en Home website, Villa Clara’s Raydel Corrales had the most relevant performance among all Cubans that took him all the way to the All Star of the event. In addition, his team reached the bronze medal by defeating Zahra Club of Lebanon. This edition of the tournament was won by the local Esperance Sportive team, a victory that clinched them a berth for the world club championships to be held in May.

Photo taken from the official page of the Sada Cruzeiro club