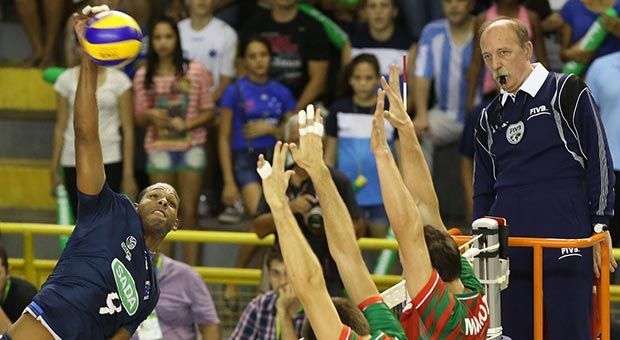 The Brazilian team Cruzeiro Sada became flamboyant winner of the of the Volleyball Men’s Club World Championship, held this week in the gym Divine Panties, in the Brazilian city of Betim. The final match took place last Sunday, and the locals won with a convincing 3-0 over Russian club Lokomotiv Novosibirsk. The sets were identical 25-20, enough to send the 7000 fans that packed the sports complex into frenzy.

The welcome news for Cuba: the hero of Cruzeiro in the latter game was the player from Havana city Yoandy Leal, who rounded the spectacular job he had rendered during the tournament. And there’s more: on the opponent team, the Lokomotiv, was another Cuban: Oreol Camejo, a key in the victory of the Russian team in the semifinals against the several time champions, the Italian Trentino. In fact, this was the first time an Italian club doesn’t win the world title.

Leal was a real scourge for his rivals for the gold medal. Leader in the game with 13 points, including four aces and one block, several of these the defining moments of each set. He is overall ranked among the best in several offensive departments in the contest. According to preliminary statistics before the final was third in attack percentage (65, 08%), and the same position among the blockers (0.64 per set), sixth in service (5 aces, 0.38 per set) and eleventh in defense field (1.64) , and among the top scorers with 55 points.

In the press conference at the end of the meeting Cruzeiro-Lokomotiv, Yoandy, who was part of that great world runner-up Cuban team in Rome 2010, said: “This is the greatest thing that ever happened to me. Winning the Club World Cup with this team and here in Brazil is amazing. I dedicate this victory to my family in Cuba…. and Sada Cruzeiro fans. I’m happy, on the game; serves were the key to victory today. “

Oreol Camejo’s numbers did not impress in the tournament but, as we noted, his work in the semifinals against the Trentino club was enough for him to earn him countless accolades. He scored 17 points against the Italians, defending champion, including 5 blocks that influenced key moments of the won sets. Valid also highlight its effectiveness on the reception (57.89%) was the fifth best in the tournament.

This was the ninth edition of the World Cup for men. The first occurred between 1989 and 1992. Then there was an impasse that lasted until 2009 when it resumed. In the recently concluded eight clubs participated: Sada Cruzeiro (Brazil); Lokomotiv Novosibirsk (Russia), European champion; Trentino (Italy), ultimately bronze here where till last season played Cuban star Osmani Juantorena; UPCN (Argentina) South American champion; Kaleh (Iran) and Sportif Sfaxien (Tunisia) respective winners of tournaments in Asia and Africa, La Romana (Dominican Republic) for North and Central America and the Caribbean, and the Panasonic Panther (Japan), special guest.

There were several players who belong to the elite volleyball who were present on Brazilian soil. Leal shared Mondoflex with Wallace Souza (MVP) and Eder Carbonera . Besides Camejo at Lokomotiv were Alexander Butko and Artem Volvich. On the Trentino stood out among other Tsvetan Sokolov, Emmanuel Biralelli, Argentina’s Sebastian Sole and American Donald Suxho . One who defended the colors of the Japanese club Panasonic was the star Dante Amaral. This is just a sample of the many stars that could be enjoyed live by the fans at the Gimnasio Divino Bragas.

The Cuban volleyball talent continues to show its strengths on stages around the world. The performances of Oreol and Yoandy ratify such claim, and they are not the only ones. At this very moment, dozens of players who left the island play in the most dissimilar play leagues. Of this, of course, we are delighted but paradoxically is the distaste of not having them together in the national team. Maybe it is not too late to find that reunion, although to many it would sound like utopia. Dialogue without a priori exclusions on the basis of the council and the respect of interest, without deception or false promises … seems like a good starting point. It’s time.

The authentic voice of Manuel De