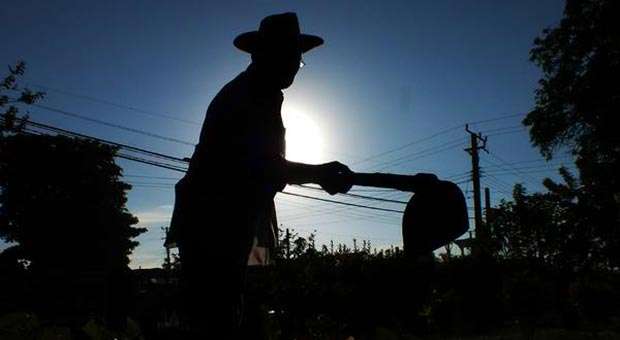 Since 2011, Cuba is betting on an economic revitalization as a lifeline against global complexity. A financial thinking has come to meet the social determinism of yesteryear, to the injunctions and laws of the times. The government has labeled its experiment with the headband “updating the economic model” and the countryside is one of the main objects of these rescue formulas.

French journalist and political scientist, Salim Lamrani has demonstrated the essence socialist deeply involved in this set of guidelines and identifies a number of obstacles in its realization: in the external order points to the U.S. blockade, and the internal order, to some system cleavages, such as bureaucracy and corruption.

It might be added, also, a final hurdle in this long distance race: the impossibility of achieving food self-sufficiency.

“If reform fails in agriculture, the whole reform fails,” researcher Pavel Vidal, from the Center for the Study of the Cuban Economy, told Catholic magazine Espacio Laical.

The countryside has become a governance equation, in a matrix system. No wonder Cuban President Raul Castro has raised it to the “national security issue ” category. As such, in the implementation of the package of “guidelines“the agriculture initiatives are seen as of critical profile.

Among them excels Decree Law 300, effective since December 2012. Such legislation conceives the granting of idle land in usufruct as a higher stage of the delivery process begun in 2008. The new legislation sees as beneficial owners natural or legal persons and raises to more than 67 acres the amount of land granted, as well as establishing the right to settle in the land: a key benefit to the farmer, he will not have to commute every morning on horseback to work his farm.

The Director of the National Center of the Land Control at the Ministry of Agriculture, Pedro Olivera Gutierrez said in a conversation with reporters that, with the previous decree, the beneficial owners could only join the Credit and Service Cooperatives (CCS), while to Decree Law 300, they can work contractually along other forms of production, thus accessing inputs and greater ease in marketing their products.

According to statistics from the National Center of the Land Control, more than 172,000 farmers have already joined this government initiative, which seeks to incorporate more arable acres. The 77 percent have no previous experience related to agricultural work, and less than half are young

These figures pose some challenges for the consolidation in the medium and long term of smallholder agriculture. Given the lack of expertise, it imposes serious job training with these enterprising Cubans, otherwise, soils and crops could become a boomerang full of unpleasant surprises. Similarly, awakens insights that prime among new farmers a segment of middle-aged population. What will happen in a few years? Where is the relay?

Besides, effort does not always bring a good harvest. Some of these lands , full of marabou and in an advanced state of neglect, require a lot of work to yield benefits , not to mention that many of them are low-fertility soils , which implies a greater challenge for the farmer.

But since the end of 2012 there were reported “significant increases “in the production of grain, pork and milk, for the incidence of new farmers, according to Gutierrez Olivera information.

Undoubtedly, in performance, small producers and cooperatives are ahead, before a state agricultural enterprise gradually lagging behind. The Land Control Center reported that these companies keep some 500 000 hectares idle, which reveals a wealth of inefficiencies and waste of resources.

Against this background, lending to small farmers becomes a needed boost in the process of release of the new productive forces. Although national banking executives mentioning as limiting access to bank branches, nestled in urban areas.

Credit policy can become healthy initiative but other channels should function as effective in agricultural practice of Cuba today, because the need for inputs doesn’t understand of eventualities.

This year farmers will not plant in Artemisa 248 hectares of potatoes, due to increased fertilizer and fuel prices in the international market.

Cuba accumulates agricultural equipment with some years of use and abuse, which is detrimental to soil and crop achievement. To overcome these shortcomings, the government created a program of wholesale sales to peasants, where, ironically, a pound of three inch nails costs 24 Cuban pesos (CUP) and a roll of barbed wire amounts to 800 CUP.

Also there are initiatives such as the first agricultural wholesale meat market in the capital neighborhood of El Trigal, in which producers can pay for leasing a space for download and sale, and equally, set the prices of their products by supply and demand.

In this regard, Dr. Omar Everleny Perez, the Center for the Study of the Cuban Economy, in an interview spoke on how positive it is that primary farmers can sell some to the state some of their produces and another in the market.

For its part, the state payment to producers gradually raises the stop. In that sense, the La Joven Cuba blog publishes an article by Robert G. Peralo , in which the author claims to have sustained a dialogue with a group of farmers satisfied with this pay, they consider fair and good dividends : ” when one deducts your costs for the seed, land preparation , fertilizer , compost plus labor, you still make a 60 percent profit , ” the farmers concluded.

However, Dr. Everleny Perez feels that much more is needed: “If you pay 500 dollars a ton of rice to a Vietnamese, it would not be idle to pay 100 to a Cuban and, currently, it does not happen. While authorities are aware of the need to finance the Cuban producer, there must be a greater number of stimuli”.

But how do we increase wages in the face of low production? asks the vice president of the State Council , Salvador Valdes Mesa , in Holguin session of the Twentieth Congress of the CTC , to which , perhaps, could add another question how to increase production in the face of the still insufficient wages ?

Perhaps answers are found, but the truth is that the problem of food and agriculture in Cuba transcends the link wage -production, and extends beyond the farmer and his micro world.

A balloon ride to the seed