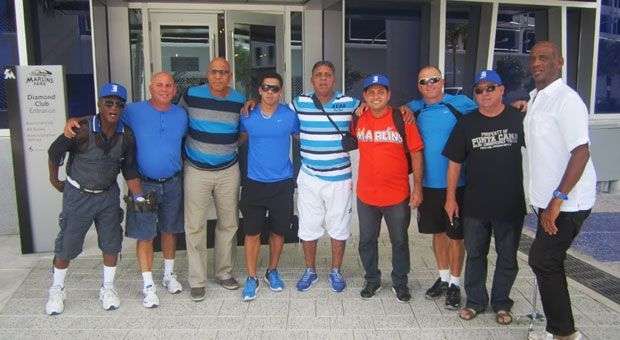 Industriales former stars Juan Padilla, Lazaro Vargas, Javier Mendez, and Rey Vicente Anglada, keep warming up Miami with the 50th anniversary of the blue team, represented in northern soil for ten players who traveled from the Island to meet with other formers stars who are based in the United States.

Hundreds of statements   transcend from that city, where the players of the famous Cuban team have participated in discussions, interviews and community activities, including a visit to the Chapel of Charity, the patroness of Cuba.

Besides, there have been exchanges with leading figures of the squad that left Cuba decades ago to try their luck elsewhere. As OnCuba  learned, pitcher Rene Arocha, who is in the United States since 1991, has served as one of the main organizers, very at all times to Capiró, Medina, Enriquito, Tony Gonzalez, Ferreiro, Valle and company.

Precisely , the right-handed, who played in the majors with the St. Louis Cardinals and San Francisco Giants, will serve as one of those who support the blue team with Osvaldo Fernandez and first baseman Colina in the coming duels of August 23 and 24 when they face an All Star of Cuban residents in the northern country.

The climax of the celebrations will come a week later, on August 31, when in Fort Lauderdale the Industriales from here and there will enter into in fraternal meeting, after which all come together to the Club Ache for the farewell.

According to data received from Miami, among others,  Jesus Ametller, Fernandez, Hill, Osmani Estrada, Deinis Suarez, Amaury Sanit and Adrian Hernandez will participate in this occasion.

For Wednesday night they booked another special moment when they visit the Marlins Park to witness the duel of the Miami Marlins and Los Angeles Dodgers, with Cubans Jose Fernandez and Yasiel Puig, face to face who also maintain a tough pennant contention for Rookie of the Year with the South Korean Hyun-Jin Ryu, the Dodgers lefty.

Cuban players are right now the sensation in the majors and are lowering the level in their presentations, so the visitors will have the opportunity to witness a unique spectacle awaited by hundreds of fans in major league baseball.

In theory, the presence of stars can mean an additional incentive for emerging Cuban players in the MLB, considering that both grew up on the island in the glorious days of Vargas, Enriquito, Javier and Padilla.

ICAIC has a new president