Living at 70 miles per hour 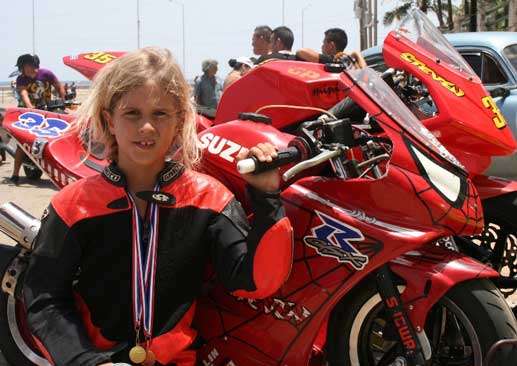 The first time I saw him, he was driving at over seventy miles per hour. He resembled a flea on the back of a German shepherd. His red dress combined perfectly with his 55 cubic centimeters motorcycle. He had adorned the engine with a recreation of Spiderman. On it, like walking on his own feet, the child with long blond ponytail retraced the makeshift circuit in front of the Havana’s Malecon.

Later I learned that his name was Steven Gutiérrez Martínez and was only eight years old! I followed him to the end of the race, I could not look away from the naturalness with which he took the dangerous curves, the violence with which the bike was roaring down the straight parts of the course .That’s crazy, I thought, and at that moment I wanted to have a son to be a player, chess, street sweeper, but never a motorcycle racer ever. It is maybe a matter of emotions.

The checkered flag saw him cross comfortably in front of a bunch of riders on their scrubby iron horses. Then he drove to his father, who was waiting with another "horse", this time an 85-cubic centimeters bike, a category for over 10 years old.

He was way too introverted; at least that’s what I saw from where I was spying the little one. He listened to the instructions. He didn’t make gestures of any kind. He said nothing. Then I remembered he was a child of eight years, and at that age there is very little to say.

And there the kid with the long blond chignon, from the municipality of San Jose de las Lajas, Mayabeque province, went again to take on the straight and curve lines in an artifact that was too big for him, or I say, he had nothing to do with. Out of that race he came with a bronze medal, without forcing the motorcycle. Apparently they didn’t allow him, if I read correctly the gestures of his father every time he passed the finish line.

After the awards ceremony I tried to talk to the kid, interview a champion. But how can you talk to boy of eight that will only answers you with a yes, a no, or a prolonged silence?

The father, Osvaldo Gutierrez, said Steven that fulfilled the dream of his life. "I always wanted to race bikes, but my family never supported me. Now I am living with my son my biggest fantasy".

He added that he doesn’t feel fear an accident because his child is well protected. "He has fallen at high speeds and not got even a scratch. If the pilot has all protections the risk is lower".

Meanwhile, Dineybis Martinez, the mother, closes her eyes every time she sees the boy at full speed on a racetrack. "I don’t get used to it, I’m really scared. I remember he had a fall in the circuit Cocomar (Caimito municipality), that affected my nerves quite a lot, I calmed down a bit when he came to me smiling".

The first time I saw hisred dress combined perfectly with the color of his motorcycle. Later I learned that his name was Steven Gutiérrez Martínez and had only eight years!, Old enough, it seems, to go through life at seventy miles an hour.

Descemer Bueno: A bolero to save your life

Descemer Bueno: A bolero to save your life

A change of times in Cuban boxing