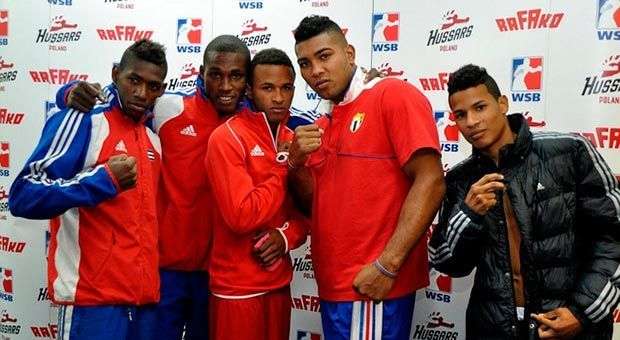 The five boxers who came to the ring at the Rafako Factory arena, in the Polish city of Raciborz, won their respective fights, during the second presentation of the Cuba Domadores in the IV World Series of Boxing (WSB ) organized by the AIBA. With this result our squad shows ten consecutive wins following the 5-0 debut over the Mexican Guerreros in the first week of the event.

Boxers of the local franchise, “Hussars ” of Poland, marked by their low participation in international events , barely offered the Cuban squad any resistance , which showed a clear technical and tactical superiority held in five fights. In this case the divisions that were called who had not seen action in the initial round of the WSB: 52kg, 60kg, 69kg, 81kg and +91 kg.

In the first match of the day, flyweight Gerardo Cervantes gave an excellent demonstration in his bout against Grzegorz Kozlowski . The Cuban maintained a devilish pace of punching in five rounds, specially his hooks to the ribs and clear swings in the short distance, time and time again landing on the face of Kozlowski. The decision of the judges was unanimous 3-0 (50-45) (50-45) (49-46) . It is very good news the performance of Cervantes, who debuted this year with the main Cuban team, and is already beginning to show remarkable progress.

Then the two-time world champion Lázaro Álvarez (60kg) was much better than inexperienced Polish Mateusz Polsky . Alvarez led all the fight, turned to boxing without much physical wear, giving away great combinations of swings and straight shots with precision. The vote on the cards was unequivocal signal to the comfortable victory (50-45) (49-45) (50-44).

The next three bouts ended by TKO favorable to Arisnoidys Despaigne (69kg), Julio Cesar la Cruz (81kg) and super heavyweight Yohandi Toirac. The opponent that stayed up the longest was the one against Despaigne , Rafal Perczinski , which managed to reach the fourth assault . In the 81kg , the corner of the local Pawel Stepien , threw in the towel just started the third round, ending the ” beating” received by his pupil , with two counts of protection included.

Finally, Yohandi Toirac didn’t believe in the 1.98 meter tall reinforcement Ukrainian Sergiy Werwejko and floored him pretty early. Ultimately the straight rights to the face of his opponent and millimeter jabs , with the lead hand , ended the ride right in the opening seconds of intermediate assault .

In the next match the Domadores will have a tough opponent in the “Russian Team” franchise. The advantage for our team is that the Sports City will be premiering as host of the IV World Series. The evening will be held on Friday, December 7, perfect for the stands to be full, allowing us to enjoy live performances by the Cuban team at the highest level worldwide.

ETECSA will increase rates in 2014

ETECSA will increase rates in 2014