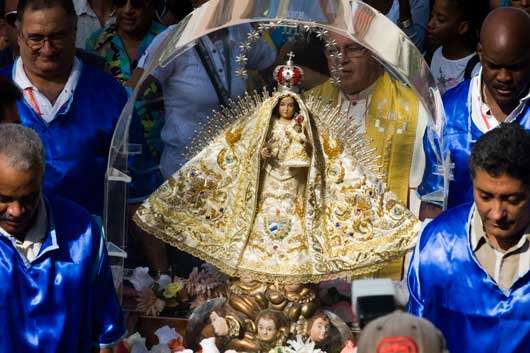 Monsignor Carlos Manuel de Cespedes Garcia Menocal, Vicar General of Havana, has a well-earned reputation for two things: being an upright man and a marvelous conversationalist. A descendent of Carlos Manuel de Cespedes, considered the Father of the Cuban Homeland, he is, above all, one of the most outstanding personalities of Cuban culture of the last fifty years. This interview, as brief as it is, confirms this: in just a few pages he demonstrates his wit, erudition and faith, all dedicated to his sole passion: Cuba.

Four hundred years ago, the Virgin of Charity was found by poor, working people of Cuba. That is a wonderful metaphor as to how the Cuban people find the image of the virgin that will later become the Patron Saint of Cuba. What else can you tell us about this discovery?

It is a wonderful metaphor with a complex history.

In the XVII century, Cardinal Cisneros organized a network of small charity hospitals along the roads of Spain, and in all of them there was an image that said: Our Lady of Charity.

It is said that before finding the image of Charity in Cuba, the Virgin had arrived on the Island in the hands of a man who sailed on a Spanish ship that capsized. He was rescued by an indigenous community, and that image –which has not been preserved– began to be venerated as an Indian totem, and the adoration of the Virgin began to expand without people knowing that it was the Virgin of Charity.

Thus the discovery of the image in Cuba by workers in search of salt and the boy who accompanied them did not fall an infertile soil.

The image was taken briefly to Bara-jagua and very quickly after that to the place where the Cobre copper mines are located. This was the beginning of a long struggle until the cult of the Virgin of Our Lady of Charity was finally admitted. The words del Cobre were quickly added for the name of the town.

Another curious element, not well known, is the material composition of the image and its significance. Some twenty years ago the then Archbishop of Santiago de Cuba sent the image of the Virgin to be restored and, to his surprise, the restorer found that the face was not made of wood, but of a hard, varnished paste that appeared to be corn. This suggests that the image was not manufactured in Spain but in Mexico or Central America, and probably came aboard a ship that went to or returned from México to Spain and that sunk around those parts.

It is quite certain that the image of the Virgin appeared in Cuba in the place where it is said, and that it is the same one that is today in the Cobre Sanctuary. But there are things that we are unsure of regarding its origin.

To understand the cult of the Virgin of Charity it is useful, for those without a religious education, to know the place of the Virgin Mary in the mission of the Church.

For us the Virgin Mary is a woman chosen by God to be the mother of Jesus Christ and thus, is adorned by special spiritual characteristics. Her mission was not only to raise Jesus Christ, as any mother raises her child, but also to accompany Him and his apostles. For us Mary is a Saint, a human being, not a God, thus we do not adore her –we only adore God–, but we venerate her in a special way. She is greater than any other saint because of her grace and her proximity to Jesus.

Mary, to which Cobre is dedicated, is also venerated by the Cuban religions of African origin. Also, the first freed slaves, who came from the area of Cobre, thanked precisely the Virgin for their liberation.

I do not know how the Virgin of Charity was syncretized with Oshun; and I think nobody does. That syncretism is purely visual, because in content, in concept, they have nothing in common. Oshun is the Venus of the Yoruba religion; the sensual woman, the conqueror; and the Virgin is precisely the opposite. Many people support the hypothesis that it was due to her beauty, because there was no other Christian image so beautiful, and since Oshun was the most beautiful woman in the Yoruba pantheon, well, the virgin became Oshun.

It is said that Carlos Manuel de Cespedes needed a piece of blue cloth for the Cuban flag and he took it from the canopy of the Virgin that was in his home. Also Maceo, when he was baptized, receives as one of his names Our Lady of Charity. Those are great figures of our history, but what do you think is the relation between the cult of the Virgin of Charity and Cuban popular patriotism?

I believe that the devotion to the Virgin of Charity has been a unifying, congregational element in Cuba, beyond any other kind of difference. This is the meaning behind Hemingway’s donation of his Nobel Prize medal to the Cobre Sanctuary, as a way of bestowing it on the Cuban people.

Remember that we Cubans were not allowed to attend the capture of Santiago de Cuba when the war ended in 1898. Instead they went to Cobre and there celebrated the independence.

During the Republic, thanks to the efforts of America Arias, a Havana parish was named for Our Lady of Charity. Later Mariana Seva –wife of Mario Garcia Menocal–, armed with a petition signed by veterans of the War of Independence (“mambises”), requested that the Virgin be named Patron Saint of Cuba. Around that time, in 1915, Benedict XV makes the proclamation.

That is why the devotion to the Virgin of Charity is linked to Spain towards the end of the Middle Ages and beginning of the XVI and XVII centuries, to the emergence of the Cuban nationality in the XVII and XVIII centuries, and also to the struggles for Cuba’s independence.

Benedict XV proclaimed the Virgin of Charity Patron Saint of Cuba and now Benedict XVI comes to the Island 400 years after it was found. How do you see the forthcoming visit of the Pope?

The visit of the Pope to a country is always a support, a great joy, even though one may not fully share his theological stance, because this is independent of the recognition of his authority in the Church. You cannot help but recognize this kind of love, affection, warmth toward him. That is why it is always a joy having him in your country.

In addition, it is possible that during his mass in Havana the Pope may proclaim Father Felix Varela venerable. This opens the way, when it becomes accepted that he performed a miracle, that he be declared blessed. Although, as a friend of mine says, you can say metaphorically that Father Felix Varela already has a miracle: Cuba.

Do you think that there is a message from the Virgin for this hour of Cuba?

It would always be one of unity, for the Cubans to do honor to her name: Charity. That is fraternal and serene love, unity, trust, optimism, renunciation of confrontation. It is everything that has to do with devotion to the Virgin of Charity, and that would be the message.

Cuba is a mystery