by Reinaldo Cedeño
in Technologies of Communication and Media
1 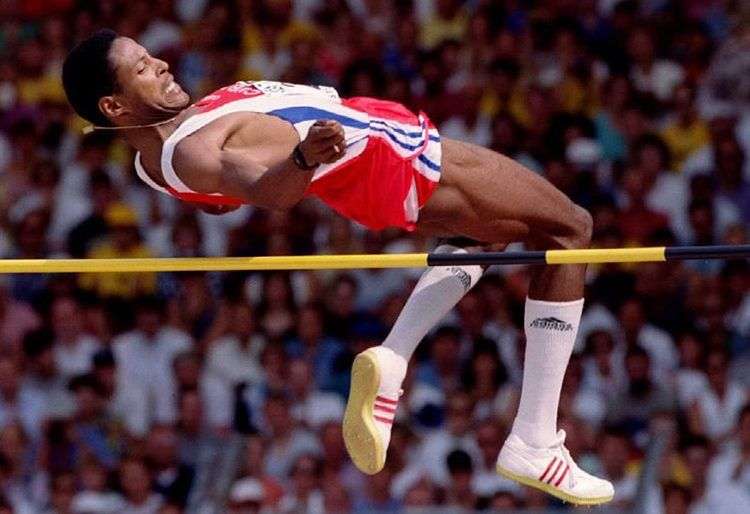 Holding a world record is going into sports history, as the name is forever inscribed in the books. And if it comes to athletics, the distinction becomes especially since many consider it “the king of sports”.

In that absolute elite group there is a Cuban. On July 27, 1993 in the Spanish city of Salamanca, he broke the world record. Height: 2, 45 meters. Specialty: High Jump. Name: Javier Sotomayor Sanabria. Date of birth: October 13, 1967 Place of Birth: Limonar, Matanzas.

In fact this was his third world record outdoors. Before, he had achieved the 2.43 meters in Salamanca too on September 8, 1988. Something special was there. No wonder in that city they have renamed the stadium with his name.

When on July 29, 1989 he jumped 2, 44 meters in San Juan, Puerto Rico, a group of his teammates rushed to congratulate him. The judges had to protect the rod before the overflowing enthusiasm. The newspaper said that a human being had jumped the equivalent of a football goal.

I had the privilege of seeing him in his first world record, in the youth category. Memorial Barrientos, Santiago de Cuba, February 23, 1986 was his birth to greatness. He was the last competitor that day. When the speaker announced the attempt, we all jumped with him. The air turned lighter. And I could shake his hands of champion.

The so-called “Prince of heights” improved several times the national record, but it was not a fleeting athlete of just one record. He won the 1992 Barcelona Olympic championship, where Cuba came after twelve years of regrettable absence, and added silver in Sydney 2000, after a controversial suspension was lifted.

He also won four medals in the outdoor world championships (2-2-0) and six indoor (4-1-1), where he also holds the universal limit of 2.43; let´s not forget his five medals in World Cups (1-2-2) and three Pan American Championships, three from the Central America and the Caribbean area and one university world championship.

But the mythical moment of his career is when he achieved the longed, difficult 2.45. The author himself is profiting from that height, taking it as a seal of his restaurant.

The math: Sotomayor record has stood untouched for more than two decades, no earthling has surpassed it; although it is noted that the candidates have already begun to improve the assault. And the thing is serious.

The world has seen in recent times, the suspense of the athlete and the rod about one centimeter more. We also heard the judgments of some Cuban commentators, wishing the bar not to fall, the record to be extended. We do not share, incidentally, the same desire. You cannot stop this.

Necessarily we have to enter the empire of statistics. According to the ranking of all time, Sotomayor is the only one who has passed the demanding figure of 2.40 meters in fifteen opportunities; but in the select club has joined a quintet in the last two years. They are Russian Ivan Ukhov, Canadian Derek Drouin and Ukrainian Andrey Protsenko; but who seem the strongest candidates to knock his universal limit are also Ukrainian Bogdan Bondarenko and Qatar´s Mutaz Essa Barshim.

They have failed their attempts on 2.46, but the impression has been that they can. And they seem to have taken the step up to it. Bondarenko was born in 1989 in Kharkov and its 1.97 meters tall, is the current world champ since Moscow 2013 Seven times he has jumped 2.40 or over.

Barshim is the pride of Qatar and even younger than the European, he was born in 1991, Bronze in the Olympic Games in London 2012, he is 1.92 meters tall. Five times he has been above the magic number. This year he jumped 2.43 that catapulted him to share ranking third all-time place. I know I risk in the forecast, but that baby-faced athlete looks like a record holder.

Is the record coming in the decline of the season? It seems unlikely. In 2015? Is it coming? Each planetary record is a result of unique physical, psychological preparedness, response to competitive pressure and a little luck in favorable environmental conditions. If all that gets together, I have no doubt that there will be a new world record in high jump. But while speculations and results play a dance of forecasts, only one thing is certain: the man who has jumped the highest in History, remains a Cuban. And his name is Javier Sotomayor.