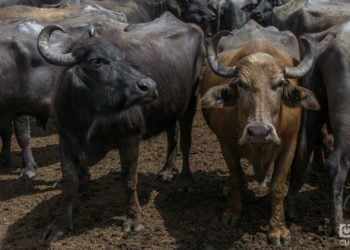 Buffalos arrived in Cuba more than twenty years ago. Two fundamental species graze in the pastures of the island: those of river and those of marsh, although today the first are the ones who prevail. Good meat and plenty of milk. These mammals eat almost anything. Of course, they require special care and attention. They are not docile like cows and do not believe in fences of barbed wires. When they are running out of food, the electric fences are the only thing that contains them. Photo: Miguel Ángel Romero. This year at the 20th International Food and Agriculture Fair FIAGROP 2017, the Buffalo Livestock Company El Cangre presented a project for the production of mozzarella cheese from the processing of buffalo milk. The project, according to Prensa Latina agency, will activate 20 dairies for the production of 4.7 million liters per year. 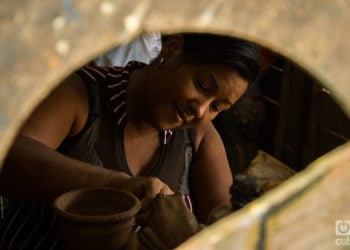 An urban legend tells that the secret of manufacturing the tinajones (a large wide-mouthed jars for catching rain), those that gave their name to Camagüey city, disappeared more than thirty years ago. A state-owned factory and some artisans are able to replicate them in a small and a medium scale, but those huge reservoirs of water are works of ancient skills. Nevertheless, in San Miguelito, a small village outside the city, they insist on living from the clay and as a dislocated industry they replicate in each house hundreds of figures and clay vessels with ornamental purposes; while reinventing the lost secret of the tinajones. 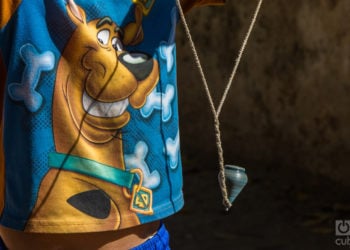 (This gallery’s title is related to the Cuban saying “Bailar en casa del trompo” that suggest not to challenge an expert in his own territory. Also, when you play the spinning-top its movement seems like a dance, that’s why here in Cuba we say that a skillful dancer is like a spinning-top.) One could go dancing to the house of the spinning-top, if the spinning-top had a house or if one did not disturb at his own. In the end, there is only one park, in the shade of some trees and at the edge of a church. In the city, both cement and asphalt limit the spaces to "release the cord" and even to this paradise, shaped like a garden, boys of all ages come from the blocks around. Is that, further to space, one only needs a small plastic or wooden spinnig-top, with a metal spike, to play and a cord with a plastic bottle cap tied at the end. So far, La Caridad Square, in Camagüey, is, for some, the house of the spinning-top, until the players are forced to move for disturbing those connected in the Wi-Fi or when the kites’ season finally arrives.