Its greatest virtue is the shift in official U.S. thinking to recognize the need to regulate the labor mobility that actually exists, but the supply is very limited. 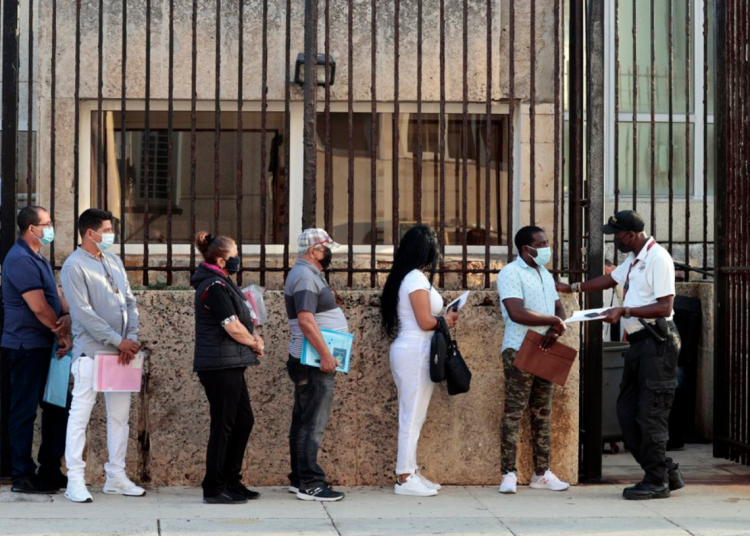 Several people arrive for their appointment at the U.S. embassy in Havana, on May 3, 2022. Photo: Ernesto Mastrascusa/EFE.

The Biden Plan for Cuba, Haiti, Nicaragua and Venezuela, seems like a small relief for the current migratory cycle in the region, but it is still far from offering an in-depth solution.

The main objective is to eliminate the explosive concentration of undocumented immigrants on the border with Mexico. Its greatest virtue is the shift in official U.S. thought to recognize the need to regulate the labor mobility that actually exists.

It opens a legal access route to emigration (parole or conditional entry) and consequently helps to dissolve the irregular route with all its risks, the interference of organized crime and human trafficking.

However, the offer of legal admission places, 30,000 per month or 360,000 per year for the four countries, is very limited given the demand.

According to the United States Customs and Border Protection (CBP) record, between the fiscal years of 2021 and 2022 alone, the combined entry of undocumented immigrants from the four countries more than tripled, going from 189,251 to 635,323.

In other words, the new plan reaches only half, if demand remains at the same level.

A second weakness of the plan is the limit of two years of stay in the United States. This term is better than that of Temporary Protected Status (TPS), which Washington grants to natives of 12 countries for up to 18 renewable months.

However, no emigrant who wants to settle outside his country to later look for a second destination, particularly when the attraction of family bonds operates for generations in the United States.

From this limit, at least until now, Cubans can escape. The Adjustment Act allows them to opt for permanent residence after one year and one day of stay in the United States.

Contradictorily, the United States still maintains its embassy in Havana without consular service for non-immigrants, thereby unnecessarily putting pressure on the demand for the new parole.

*This text was originally published on the Del Gran Caribe blog of La Jornada. It is reproduced with the express permission of its author.