How a Cuban who is a U.S. war veteran wants to make peace, despite threats. 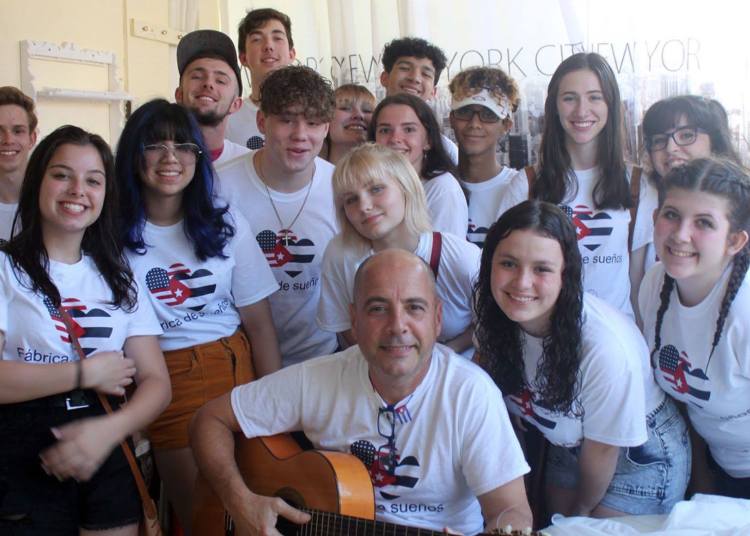 Carlos with a group of students in Havana, in November 2019, in the private house where they were staying.

Once upon a time there was a Cuban who went to war and when he returned decided to teach and spread peace. However, his message has hit a wall of intolerance.

He wanted to work as a teacher and, in addition to teaching Spanish, he decided to try to make his students understand the world through diversity and understanding among people of goodwill. He began with its own country of origin, Cuba, the Caribbean island that has maintained a rivalry of biblical proportions with the country where he lives and which he assumes as a second homeland.

Carlos Lazo, 55, was born in Jaimanitas and now lives on the west coast of the United States, where he teaches his students what Cuba is like, beyond any caricature. What he does, he explains to OnCuba, is “a work of love.”

“I believe that love can cure everything and that is why I am in this work of love. Hate doesn’t solve anything. Love does resolve, it does not aggravate the situation. I don’t want to be a leader, I’m just a teacher,” he says.

Teacher of a class in which the students wanted to open up and get to know the world, he started by telling them about his origins; about Cuban culture, its roots and its people. So when Washington started closing what had been opened under the Obama administration, after decades of total misunderstanding, Carlos Lazo came up with a “crazy idea”: traveling to Cuba with his kids, and that they themselves see it, feel it, smelled it, listened to it.

He knew they had common points: music, the arts, and history. Then he taught them his music, his history, the personality of an island that is not wealthy but welcoming. To carry out a work with love and for love. “I taught them Cuban songs, how Cubans live…the first thing they learned was ‘Cultivo una Rosa Blanca’ [the emblematic poem by José Martí]. I told them that everyone must believe in their dreams and fight for them. This is how Fábrica de Sueños [Dream Factory] was born, when we made the first trip to Cuba in 2018. It was like going to a love party, where you’ll be given thousands of things, without wasting much time on explanations. It is about creating a bridge between the two nations,” he emphasized.

The thaw was disappearing, but even so, the students welcomed the idea with enthusiasm and began traveling to Cuba. Some with their parents, others alone…adults without children also joined.

“They had the opportunity to meet many children, to walk, sing and play with them. They learned how Cubans live, they even gave a recital at the Karl Marx Theater for three days in November, they met several singers, they learned to sing in Spanish. These were sessions of great love.”

And the storm clouds came

But those messages of love that come from the west coast of the United States are colliding with a wall of intolerance. Insults and threats. South Florida has been the historical seat of the most hostile voices to any type of rapprochement between the two countries. The Cuban community based there, the largest outside of Cuba, continues to be divided in its points of view towards Cuba. However, the latest surveys acknowledge that the hard line has been weakening over the years and that an increasing percentage is in favor of establishing normal relations between the two countries.

However, a persisting radical portion seems to raise the same hate message of the first decades of the dispute, now with a new weapon: social networks.

Carlos Lazo has begun to be harassed as his work becomes more known. The Cuban-American professor always refers to Cuba as “my country of birth” and the United States as his adoptive country, Cuba is his mother and the United States his father, he says. He served as part of the U.S. Army on the battlefield in Iraq, where he received the Bronze Star, but is being the target of offenses and threats by some of those born in his own homeland. The signs of hatred range from calling him a communist, a common “insult” in the United States when someone promotes “normalcy” and rapprochement with Cuba, to death threats against him and his family.

Lazo says he doesn’t allow himself to be provoked and responds with a message of peace. Someone wrote to him: “You are a shame. What you have to do is go to Cuba with the other communists. This country is for the exile, not for individuals like you. Out.” And Lazo, with his reasons, answered: “God bless you, son, you and your whole family, this and every day.” And the other remained silent.

There are more violent ones, and concern for his safety and that of his family has led to teacher Lazo having already made a formal complaint to the authorities. 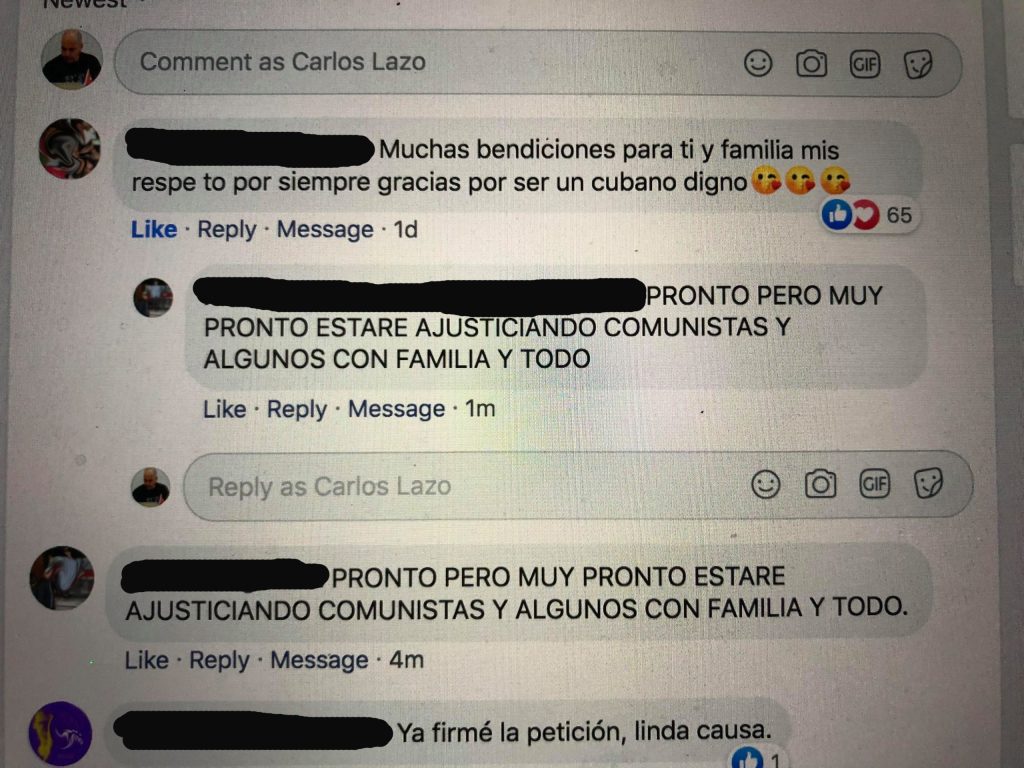 Threats and insults were always commonplace, but they have increased. What happened? Well, Lazo has opened a petition addressed to President Donald Trump to ease some of the restrictions that weigh on the island in these times of coronavirus.

“There are people who focus on politics and want me to join the politicians. But I’m not interested,” he explained. So he has dedicated himself “to what is humanitarian, to what is people to people, we were there during the tornado, we collected money and sent it by Western Union or donated it personally.”

Thus, many of the students and their families, through the Dream Factory, visited the victims in Cuba. “It’s a work that I love, I see it as if I were helping any needy community in the world. And this should not be controversial. Some people see it as something bad, for different reasons, both in Cuba and here in the United States, however, I focus on the good I do for each person I can reach. In the world there are many calamities, one can’t solve them all, but when you can help someone, even if it is one person, it is more than standing idly by and waiting for the world to be fixed,” he added.

But with the new restrictions and the coronavirus pandemic the scenario has changed. “One of Cuba’s main incomes was tourism. With the visits of the students those funds stay with the people, in their businesses, they stay in private homes, they eat in private restaurants, and I agree with that. I’m not in favor of starving people, as if they didn’t already have enough with the difficulties that the socialist system has,” he stressed.

“When I saw that tourism was closed, I realized that the coronavirus would create an additional problem of lack of income for families, causing a humanitarian crisis. I realized that the country is going to be in serious trouble.” This is why he had the idea of ​​making the petition public within the framework of the exacerbation of the measures against Cuba in recent months.

The petition recalls that the restrictions affect Cuban families on both sides of the Straits of Florida because flights have also been canceled and travel has been made more difficult. “They say it is to punish the Cuban government, but the reality is that they punish the Cuban family. The very fact of prohibiting the Western Union from processing remittances from other countries makes family support difficult. The same brake on the shipment of oil. Oil is not to light up [President] Díaz-Canel’s house, but for ambulances, the hospitals that are facing the coronavirus,” he stressed.

“I woke up one day and told myself that where there is love, you are not wrong. I wrote to Trump asking him to temporarily ease some sanctions on Cuba, I made the petition and it spread enormously. People began to sign, even in Cuba there was difficulty entering the site. I did another one for people in Cuba and so far there are already 15,360 signatures from the United States and about 3,500 from Cuba. They are like 19,000 in total.”

The concerns started when many people wanted to sign, but were worried that his name was public. From that concern to the increase in attacks, it was only one step.

“I try to ignore them. I have been told that there are programs [in South Florida] that provoke hatred and denigrate me. It started since I put the song ‘Cuba, Isla Bella’ on the networks, which we sang with my students. Since then I started being questioned, which now has escalated to threats and insults and that worries me because there is always a madman out there. Look at what happened at the embassy in Washington,” explains Lazo at the only time he seems concerned.

“On my Facebook wall I try to avoid hate messages, wherever they come from, even if they are posted by people who come to my defense. I just want a good vibe, to try to stay clean, positive. Some friends alert me if someone is speaking ill of me somewhere, but I always tell them not to tell me, I don’t want to know, I’m only interested in building. In life you must surround yourself with beauty,” he emphasizes.

Lazo understands that most of his detractors may be followers of President Trump and believes that if the president decides to ease the restrictions in these times of coronavirus, they will continue to support him. Furthermore, “they are not going to stop voting for him and for me it would be very good if he relaxed because I don’t think he will lose votes if his administration implemented, even if temporarily, a more flexible policy towards Cuba.”

What many people don’t know is that “most of those who write in my networks support me, they encourage me. And that is important. Love produces those things. It’s that. Love can work wonders.”

More than a thousand recovered from COVID-19 in Cuba