The teacher Carlos Lazo and his “insistence on linking my mother and my father in a hug”: Cuba and the United States. 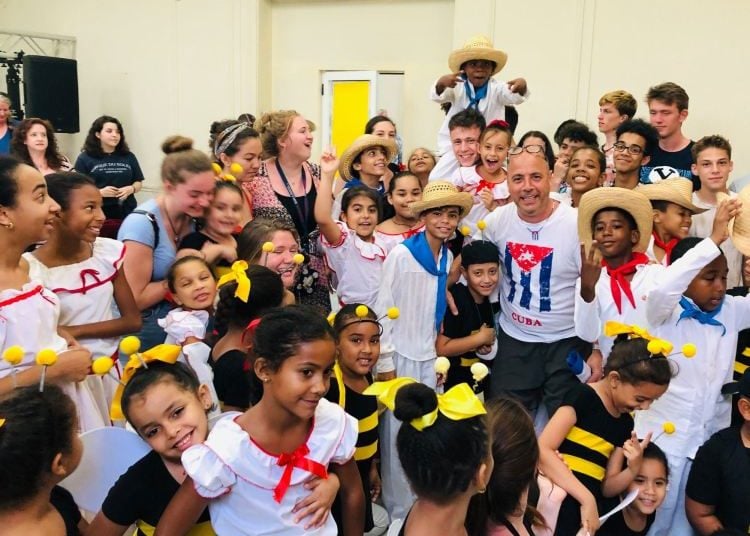 Teacher Carlos Lazo and his students from Seattle share with Cuban children from La Colmenita. Photo: Courtesy of the Author.

I lived the first half of my life walking the streets of Havana and the other half between Seattle and Hialeah. I was born and raised in Jaimanitas, a fishing town west of Havana. As a child in that little town, the elderly knew my name and if they had to scold me, they reprimanded me as if I were one of their children. “Just wait till I tell your mom!” was the most effective phrase to remind me of good manners.

I spent my childhood playing hide-and-seek (or catch) and in baseball games where the ball was a cue. In Jaimanitas, the neighbors stormed the door without warning, asking “comadre, did you make coffee?” or “would you have two teaspoons of sugar?”

Sometimes there was a whisper of “boy, do these people bug!” It bore no malice but love. There I received the sap of love that has accompanied me all my life. I also learned there that you can be happy with almost nothing and that a hug can be the best balm to ease your sorrows.

I can’t hate those or these. I have spent the first half of my life in Cuba and the second half here in the United States. It was on this shore where I made my most expensive dreams come true. To serve and thank my adoptive country, I have even been a soldier-nurse, under the coat of arms of the Star-Spangled Banner.

In the war, amid the smoke and shrapnel, I helped “Made in USA” Marines who were injured. And when there was no other choice, I hugged them like a child who is leaving is hugged, with that healing hug that I learned as a child in the fishing town.

Years later, also on this shore, I became a teacher. I have taken to my classroom the half that comes from my island. Here I have given myself over completely and offered what I was and what I am. Blond or black children, with coppery complexion or slanting eyes, they call me by my name (a rainbow of humanity, that’s my classroom).

Their voices bear the same tenderness of those voices that said my name when I was little. I can’t separate them. They are identical. And I love those in yesterday’s neighborhood and these here today in Seattle equally. I cannot (God forbid!) wish them badly or hurt either one or the other.

I insist so much in linking my mother and my father in a hug―you know, Cuba-USA and my trauma of divorced parents―that I have taken my kids (as I affectionately call my students) to walk through the streets of my childhood.

I have set them loose in Havana, in the same alleys that saw me run as a child, and they have opened doors without asking “with your permission.” Under the spell and syncretism of African or Teutonic gods, who knows! those children have instantly fallen in love with my neighbors.

And the people of my neighborhood (it could not be otherwise) have reciprocated that love as they loved their own children. That’s how my U.S. children have been loved in Cuba, all over Cuba! In those times, as if by magic, some have become the others and all, those from here and those from there, have been one. And unexpectedly, as if suddenly I remembered something I had long forgotten, I have understood the destiny of people like myself; people with two homelands and a heart united in tenderness. That destiny is to be a bridge of love, to unite the mother and the father and all the children in a hug.

That’s why I tell them: don’t count on me to hate―not even in these times when hate seems to be imposed. I know that love, even defeated love, is more powerful than hate. And I have a lot of people to love because I carry two homelands on my shoulders: Cuba and the United States.