The former Democratic congressman is controversial, he does not disarm easily but he continues to fight to get Miami to be understood in Havana. Sending medical aid to the island disarmed almost everyone. There are those who have not come out of their stupor. 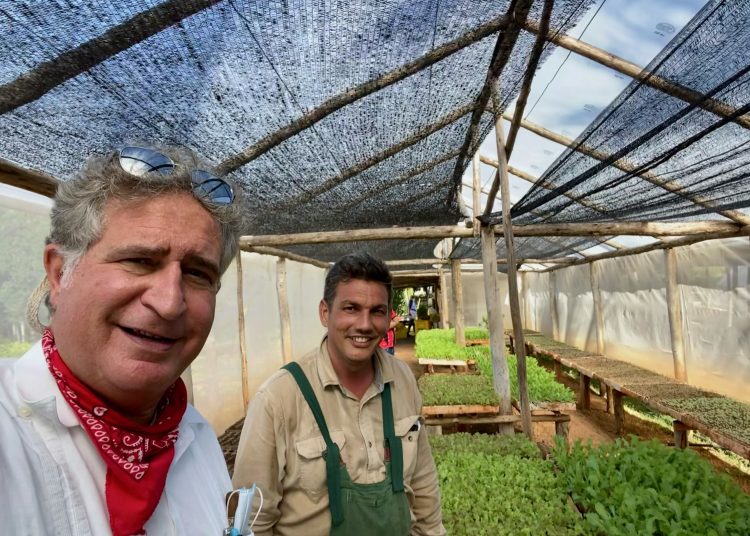 Joe García, together with private farmer Fernando Funes, from the Marta farm in Havana province, specialized in organic products. / Courtesy of Joe García.

When José Antonio García, better known in Miami as Joe, was appointed executive director of the Cuban American National Foundation at the beginning of the new century, he didn’t even know what Cuba smelled like. Now, two decades later, he has been to the island five times and has conversed with important officials and academics. Those trips have allowed him to polish his vision of the land of his parents and grandparents. Joe was born in Miami Beach in 1963.

He was a Democratic leader and a congressman from that party in the federal House of Representatives. He is a controversial politician in Miami because he tends to advocate topics that most disagree with. He does not hide that the economic embargo is counterproductive for both countries, and since the last decade he has been advocating the normalization of ties between the two countries and, even more, for an improvement in the treatment of Cubans residing in the United States.

Whenever Barack Obama, as a presidential candidate and later as the president, visited South Florida, Joe García was usually his host. One day it occurred to him to take him to eat Cuban fritters. Later, he organized a lunch for him at a hotel in the city and got the Foundation to support him electorally. The lunch was unique. That year Obama was elected president with the promise that he would change relations with Cuba.

The morning that the United States reopened its embassy in Havana, Joe García was next to then Secretary of State John Kerry. It was when his work behind the scenes with the White House to improve relations was discovered. Now he has just achieved the impossible: to negotiate a shipment of humanitarian medical aid. Many of his friends and opponents bet that his efforts will continue because, as one says, once you open a gate it’s very difficult to close it.“Joe is an asere in the purest sense of the word,” said an academic there. “He is one more Cuban, upright” despite the fact that he was born in Miami Beach.

How did this trip with donations happen and why did you decide to do it?

When the pandemic appeared, we thought that the worst would happen in Cuba based on what we saw in the United States. A few weeks after it started, information began to reach us about the difficulties in Cuba. The original idea was not a donation. We didn’t want it because it leads to a lot of publicity: “Lots of straw and little rice.” We wanted to establish a mechanism so that first-rate health care, and family support, could be harmoniously combined, and to establish a lasting and sustainable mechanism. Because we knew that this need would be sustained over time, and that the more time passed, the more necessary that mechanism would be, beyond any propaganda or public relations pretense.

In the end, it did not happen as we wanted at first: that the help from family to family on the island could be linked and guarantee that the same people on this shore would contribute to those on the other shore in the best possible way. In the end we succeeded because the company that organized the donation also sent two containers of family aid to Cuba with soap and toothpaste donated by more than 7,000 residents in the United States to their relatives on the island.

How was the support raised?

In different ways. From the beginning there were people willing to help. They helped us buy small quantities to determine prices and how to pack the boxes. But we realized that that was not the way, we had to buy wholesale.

A friend knew a company to do it. Reasonable prices and a warehouse to organize everything were achieved. Then came the stage of bureaucratic negotiations. Despite the fact that an official told me it was cynical because permits and licenses were never going to be obtained in the United States, we hired a lawyer. As we wanted the donations to go to the Pedro Kourí Institute of Tropical Medicine, we had to inform OFAC (Treasury Department), but at that time we could not send it directly. We had to wait for the Rancho Boyeros airport to reopen. We are very grateful to the Donald Trump administration, which granted us these licenses, a cumbersome process due to the amount of detail that must be included in the order. Then came the plane. Also, other charter companies that complained that they could not do that, but when the flights opened, Havana Air gave us a fairly reasonable price.

I understand that the reception in Cuba was great, and that in Miami hardly any criticism was heard, something that years ago was practically impossible. What do you attribute it to?

To the fact that we are all Cubans. I have traveled the world a lot. I never met a Cuban who hated his country. In Cuba I have met people with great love for their country and, abroad, Cubans with longing for their country. I repeat, I have traveled a lot helping Cubans abroad and although I have heard criticism of the system, never of the country.

What will or how will Biden’s policy towards Cuba be?

If there was anyone who was a recipient of President Barack Obama’s policy, with the opening, it was Vice President Biden, who had control of Latin America. But different perceptions and doubts will come. The humanitarian issues of contact and remittances must be moved first.

There are things that cannot be changed, such as the rhetoric towards hotels, or the Fincimex company. The cruise ban is something to consider lifting because it was of great benefit to civil society and private parties. The exchange between people promoted our culture and personal relationships, developed restaurants and private accommodation.

Will there be a dismantling of Trump’s policy? Immediately or slowly?

What Trump did was pure poison, I imagine there are things that are going to change. Something that I have learned with my trips to Cuba, and they are already five, is that Cubans have to do more things. And they are already doing some, not that they be important for the United States but for Cuba. The change, the economy, the expansion of private investment, giving permits to individuals, a currency consistent with its real value, is something that will be welcomed by the new administration. During Obama it was not done, but it will be welcomed by Biden.

Let’s hope the changes on both sides will be quick because the faster they fix what is toxic, it will be a benefit. Everything they do will benefit the Cuban people and, with few exceptions, there are people here who want to help Cubans. Just as there are in Cuba. More things were resolved with Obama than in the previous fifty years. With Obama there were more contacts, business, travel and less repression.

Nothing Obama did in Cuba was against the U.S. nation. That’s why if Biden repeats it, we agree.

What could the Cuban government do to improve its relations with emigration in the United States?

It is a topic on which I have had long conversations with government officials and academics. One value that Cuban Americans have is that remittances are the second largest import item, something of enormous importance. The importance that Cuba has in relation to emigrants or exiles is that they don’t have a serious relationship with them. That is why they have to be treated well. It is like the land that you tend to sow and reap.

The Cuban government has maintained a not very serious relationship with its community. Many feel extorted, others feel that when the Foreign Ministry comes to this community it doesn’t pay attention to them, they also complain that those who come here treat them badly.There are things to do to improve that relationship.

What do you think of the appointment of a Cuban American as Secretary of Homeland Security (DHS)?

I know Alejandro Mayorkas, I hold him in high esteem. He has managed to obtain that responsibility not because he is Cuban American, but because of his work. He was the youngest prosecutor appointed by President Bill Clinton. He received a very good treatment in Cuba and he was given the opportunity to reconnect with his culture.

Obama was never able to appoint an ambassador to Cuba due to the opposition of the Cuban-American senators. Do you discern a change?

It’s not one of the essential things, but we’ll get to that eventually. It is a difficult decision, but there are more significant things for the country. I only know that the current Charge d’Affaires in Cuba has been pernicious. He has not acted correctly before the accredited government.

Would you agree to be an ambassador to Cuba?

No. I already served my country in the legislature, the executive, I served my party. Now it’s about serving my community and in a positive way. A voluntary task, but to improve ties between the two countries.