The donation was organized privately by a group of Cuban-Americans who favor the improvement of relations between both countries, and consisted of sanitary supplies and biosafety materials such as suits, face shields and masks, for use in the fight against COVID- 19. 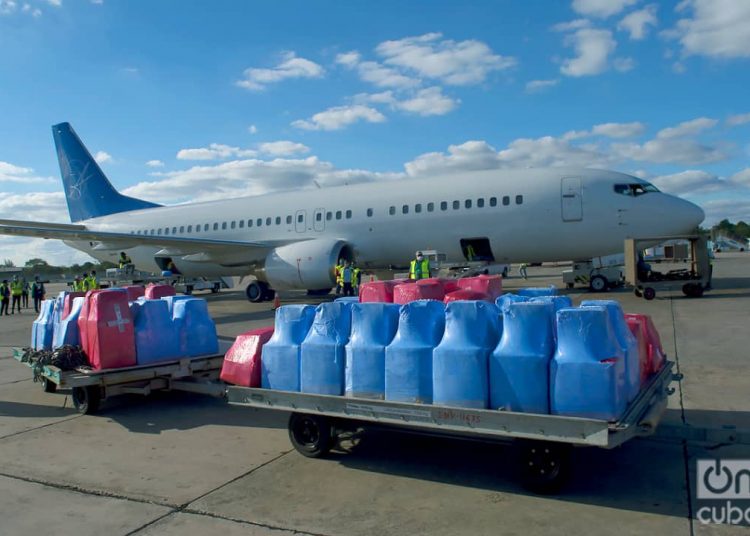 Arrival at José Martí International Airport, in Havana, of a donation of sanitary materials sent by Cubans residing in the United States, on December 10, 2020. Photo: Otmaro Rodríguez.

A donation of sanitary materials sent by Cubans residing in the United States arrived this Thursday afternoon at José Martí International Airport in Havana, where it was received by island authorities.

The shipment landed in Cuba as a result of the efforts made by the Wajiro Import & Export company, with the support of former Florida state congressman Joe García. It was privately organized by a group of Cuban-Americans who favor the improvement of relations between the two countries, and consisted of sanitary supplies and biosafety materials such as suits, face shields and masks, for use in the fight against COVID-19.

The donation, made up of 102 packages, arrived as cargo on a passenger charter flight from Miami, and was received by Dr. Manuel Romero, director of the Pedro Kourí Institute of Tropical Medicine (IPK)―the main institution receiving the shipment―and Yanet Stable, director of Migration Policy and Attention to Cuban Residents Abroad at the Cuban Foreign Ministry.

Both officials thanked the donation on behalf of the Cuban people and government, and highlighted its importance in the current epidemiological context.

Yanet Stable, director of Migration Policy and Attention to Cuban Residents Abroad at the Cuban Foreign Ministry, talks to the press after the arrival at José Martí International Airport, in Havana, of a donation of sanitary materials sent by Cubans residing in the United States, December 10, 2020. Photo: Otmaro Rodríguez.

The director of the IPK stressed that the donation complies with the memorandum of understanding in force since 2016 between the Department of Health and Human Resources of the United States and the Ministry of Public Health of Cuba, and said that it will serve to care better not only for Cubans, but also foreigners who arrive sick or could be infected on the island.

Dr. Romero affirmed that for the island the donation itself is more important than the money it could have cost, and also stressed that this aid will contribute to continue carrying out the strategy to confront COVID-19 in the country and to comply with the protection required in the IPK and in other Cuban hospitals and diagnostic laboratories.

For her part, Stable said that it is a “donation for life,” which is “a sign of the desire of the majority of Cubans residing abroad to cooperate with their country of origin in the fight against the pandemic” and also of “the will of the government of Cuba to continue strengthening ties with nationals residing abroad.”

Meanwhile, two of the promoters of the donation in the U.S., former congressman Joe García and businessman Saúl Berenthal, the latter known for his efforts to introduce Oggún tractors into the island, said this Thursday on a Miami radio program―hosted by former Hialeah Mayor Raúl Martínez―that this is a project they worked on for months before it could become a reality.

“Nothing between Havana and Miami is easy, but after a lot of tenacity and work this was achieved,” said García, who pondered the Cuban sanitary protocol against COVID-19 and confirmed that the donation has among its recipients the IPK for its character as the guiding center in confronting the pandemic in Cuba.

“Today is a very important day for us because a donation that we began to organize a few months ago has arrived in Cuba and we want to thank the Cuban doctors who have performed so well in treating all the patients, whether they are Cuban or foreign, and who continue to fight against this virus,” Berenthal said.

The businessman said that “several friends who have in common the interest of helping our brothers and sisters in Cuba have agreed not only to request the necessary permits from here (the United States) but also those necessary from the island” and send the materials donated through Wajiro Import & Export.

He explained that this is “a private donation, made by a group of Cubans and also by an American who in good faith would like to help, and everything was done respecting the existing regulations that allow certain medicines and food to be sent to Cuba,” and that on the Cuban side it was processed through the Medicuba state entity, in charge of acquiring supplies for the Cuban medical system.

He described how after not being able to charter a plane to send cargo to the island, due to current U.S. regulations that prevent it, they decided to do so through a “plan B”: a passenger charter, which provided them with facilities to do so.

In addition, he confirmed that the intention is that this not be the only donation they send to Cuba.

“Our objective is now with the doors that we have opened and, understanding the process that we can follow, make more shipments. To send regularly not only what we have sent now but more as well as even, if one day we are given permission, vaccines,” said Berenthal, who pointed out that he will soon travel to the island to meet with health authorities and check the use given to the donation.

This donation is in addition to the more than one hundred received by the island during the coronavirus pandemic. However, it gains special relevance due to the fact that it is sent from the United States at a time when this nation is preparing for a change of administration, after four years of the presidency of Donald Trump, in which sanctions against Cuba multiplied and bilateral relations notably deteriorated.