Although still very far from the levels of the so-called “thaw” of the Barack Obama administration, in recent times there have been some gestures and signs in both directions, according to experts. 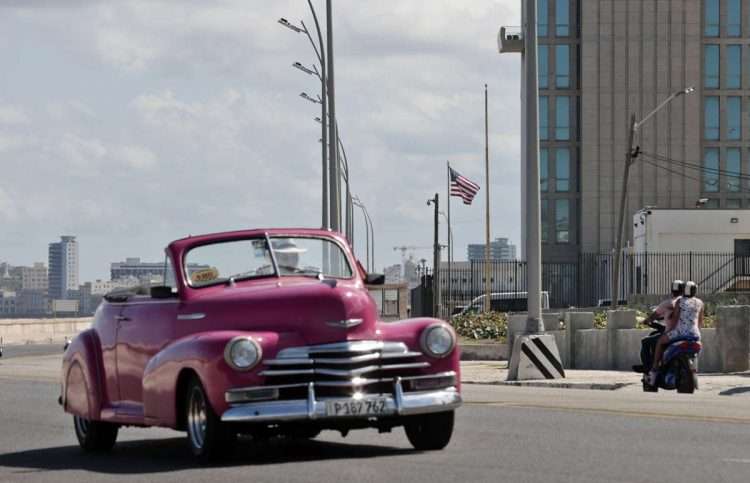 A classic car drives past the U.S. embassy in Havana. Photo: Ernesto Mastrascusa/EFE.

Migration, academic-scientific exchange, logistics, trade and disaster assistance are some of the issues that have brought Cuba and the United States closer this year, although still far from the levels of the so-called “thaw.”

The latest example of this is the Cuba-United States Business Forum this Wednesday in Havana, an initiative that has not been held since 2016, in full rapprochement promoted by then-presidents Raúl Castro and Barack Obama.

There have been other gestures and signs in both directions in recent times, according to experts, who recall, however, the historical distance between the two countries since the triumph of the revolution in Cuba in 1959 and the division of the world into blocs with the Cold War.

U.S. Secretary of State Antony Blinken pointed out this October that his country’s government was willing to review whether Cuba deserves to remain on the list of countries that sponsor terrorism, an important obstacle for investments on the island.

Cuban Foreign Minister Bruno Rodríguez recently advocated “holding a dialogue” on “the basis of equality and mutual respect.” “This year is an opportune time to normalize relations,” he affirmed.

The current tenant of the White House, Joe Biden, eliminated in May a part of the sanctions that his predecessor, Donald Trump, had imposed, such as the limits on remittances and commercial flights to the island beyond Havana.

However, most of the embargo imposed in recent decades and reinforced by the Trump administration is still in place, an element of permanent criticism by the Cuban government, which has just started a campaign entitled “Better without blockade” and that in a few days will present its draft resolution against the embargo before the UN General Assembly.

In the opinion of Cuban sociologist Rafael Hernández, an expert in bilateral relations, “the search for an agreement” is “logical” in the current complex moment and would have the support of the international community.

“Political will is all that is needed. Neither more nor less,” he stated in an interview with EFE, in which he warned against possible U.S. double games.

The reference for Hernández is the “thaw” of Obama and Castro, those 25 months between the end of 2015 and the beginning of 2018 in which what he calls “the path of normality” was undertaken.

It was an “intelligent” measure, with support on both sides of the Florida Strait and that benefited both countries in multiple areas, he considered. In that period, 23 bilateral agreements were signed.

“It’s about resuming a dialogue where it was left off and trying to reactivate the agreements that were reached. Not to change suddenly, (but) to return to the point where we were,” he argued.

Analyst William LeoGrande warned for his part in statements to EFE that “Cuba continues to be a controversial issue in U.S. domestic politics” and that, “with the midterms just around the corner, the White House will want to do nothing to jeopardize the Democrats’ chances in Florida.”

He also pointed out that Biden has made human rights and democracy a “centerpiece of his foreign policy,” so Biden may be “reluctant to engage in warm relations” with Havana after the crackdown on anti-government demonstrations.

Among the recent bilateral contacts is the donation of 100 complete sets for firefighters that the U.S. Agency for International Development (USAID) is delivering to Cuba as a result of the serious industrial fire that devastated a fuel deposit base in August in Matanzas, with 17 deaths.

In addition, this agency has recently allocated two million dollars to assist those affected by Hurricane Ian, which devastated the west of the island in September, with three deaths and damage to 100,000 homes and 21,000 hectares of crops.

Cuba, which has accused USAID in the past of financing dissident groups on and off the island, has confirmed the shipment of equipment and is grateful for the aid for the hurricane, which will be channeled through the International Federation of Red Cross and Red Crescent Societies.

These movements occur in a fiscal year (October 2021-September 2022) in which record numbers of migrants in general —and Cubans in particular— have been registered at the U.S. border. Migration has become a key topic in U.S. national politics.

According to the Department of Customs and Border Protection (CBP), Cuban migrants totaled 224,607 in that period.

The exodus of Cubans already marked the bilateral talks on migration last April in Washington, another mechanism reactivated by the Biden administration and that Trump had suspended in 2018.

The U.S. government has also taken several measures in recent months to advance in the normalization of the migration issue, such as the gradual increase in its consular services on the island and the reestablishment of a family reunification program, suspended since 2017.

According to its bilateral agreements, Washington must issue at least 20,000 visas a year for Cuban migrants, a figure that it will meet this year for the first time in five years.

Eye to the viewer: Liudmila Velasco