The United States has “laws, clear criteria, clear requirements and we will continue, as necessary, reviewing these to see if Cuba still deserves that designation,” said Antony Blinken from Colombia. 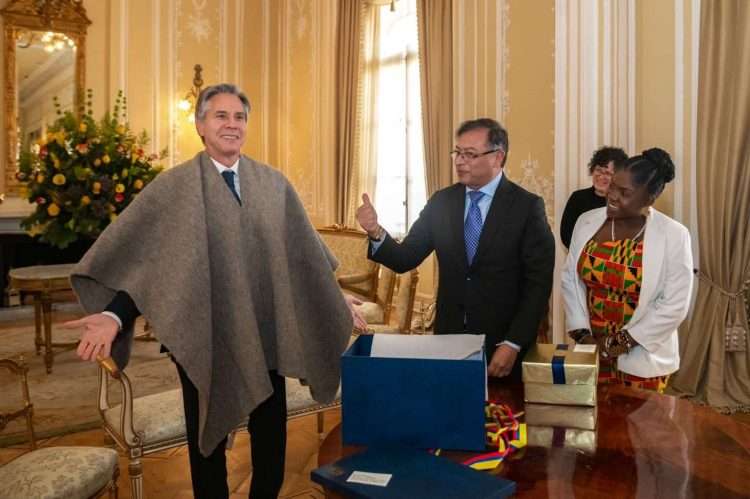 Gustavo Petro wrote from his Twitter account to accompany this image: “My gift to Blinken.” Photo: Gustavo Petro/Twitter.

Asked if Cuba would continue on the U.S. government’s list of countries that sponsor terrorism, Secretary of State Antony Blinken assured this Monday in Bogotá that the United States has “laws, clear criteria, clear requirements and we will continue, as necessary, reviewing these to see if Cuba still deserves that designation.”

Blinken, who is visiting Bogotá, offered a joint press conference at the Casa de Nariño (venue of the Executive) with Colombian President Gustavo Petro, who told him clearly that the fact that Cuba is on that list is “an injustice,” since it was the Colombian government of Juan Manuel Santos (2010-2018) who asked the island to first host the peace negotiations with the FARC, which the U.S. administration of Barack Obama supported, and then the talks with the ELN.

He added that with the arrival of Iván Duque to power in Colombia and Donald Trump in the United States, Bogotá asked Washington to declare Cuba a country that promoted terrorist activities, with which the Caribbean island was once again included in said list in 2021, which carries penalties.

“That is called an injustice. Therefore, in my opinion…it must be corrected,” said Petro, who is trying to reactivate the peace negotiations with the ELN, after four years paralyzed by clashes and misunderstandings between the parties.

Precisely on Sunday, the ELN dialogue delegation left Havana to “return” to Colombia or the areas where they have a presence, as part of these negotiations. A flight took this group to Venezuela, another guarantor in this process.

The leadership of the ELN, including its leader, Eliécer Herlinto Chamorro, alias “Antonio García,” and members of the Central Command (Coce), such as Israel Ramírez, alias “Pablo Beltrán,” were in Cuba from the beginning of the talks and their return to the guerrilla camps is a step foreseen in the protocols so that it can reconnect with its ranks in the face of the negotiation.

To this end, one of the first steps taken by the Petro government when announcing its intention to resume talks was the suspension of the arrest and extradition orders against the ELN negotiators who were in Cuba so that they could travel.

The dialogues with the ELN began in February 2017 in Quito, from where they were transferred to Havana the following year, but they were stalled and officially detained in 2019 during the government of Duque (2018-2022), after an attack by that guerrilla against the Police School in Bogotá in January 2019, where 23 people died and nearly a hundred were injured.

Also on Monday, Cuban President Miguel Díaz-Canel had ratified on Twitter that the departure from Cuba of the negotiators of the Colombian National Liberation Army (ELN) was “a step forward” for that South American nation’s peace process.

Blinken is in Colombia to address issues such as the climate crisis, regional efforts to deal with irregular migration, drug trafficking, security, and the environment.