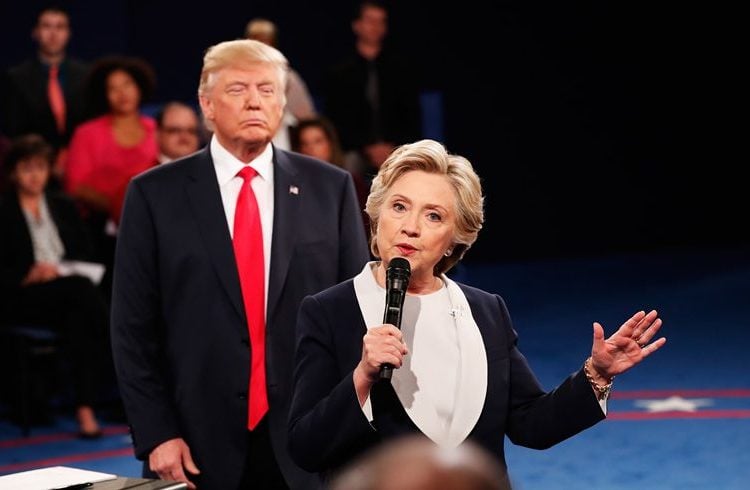 Did the second presidential debate change the dominating tendencies in the election campaign in the U.S.? In order to answer this question some explanations are necessary. The first is that the effects of the debates depend a great deal on the context that surrounds them. The debate is not just the 90-120 minutes in front of the cameras but also the expectation generated about the performance of the nominees before they come face to face and also the stage of explanations, making points and distortions that it gives rise to. In practice, the policy and impact of the debates covers a greater range of participants than just Hillary Clinton and Donald Trump.

In terms of context, the debate took place after nominee Trump’s unfortunate performance in the first debate, which tends to be decisive in the creation of first impressions about the rival nominee, a role that in this season better fits the New York millionaire. Before the second debate, Trump was hard hit by the revelations about his behavior and opinions about the treatment of women, inappropriate for someone who does not aspire to be the sultan of a harem but rather the president of a republic. It’s not a question of Trump stopping in its tracks that profuse bleeding, but the post-debate discussion has changed the attention toward topics dealt with on Sunday, U.S. policy toward Russia and Syria, for example, which in minimum terms takes the Republican nominee out of the worse of his nightmares.

The hope was that Secretary Hillary Clinton would checkmate him in this second game since she had more than enough ammunition. It didn’t happen. Partly because Hillary Clinton played safe and avoided a stone-throwing fight about personages in which the glass roof of her family, her husband, isn’t the best. Trump was able to recover vigor and time for a nominee that some Republican heavy weights were already calling on to throw the towel.

The fact that Trump recovered from a position against the ropes and appeared more prepared than in the first debate does not mean Hillary Clinton lost. The surveys and stories discussed by the principal politicians in the campaign and analysts suggest that Hillary Clinton, who was ahead, did not make any mistakes to cost her such a position. Trump came out of the corner, but fundamentally nothing is new. The Democratic nominee has increased by a few points the advantage she already had in the national surveys and in the hinge states where the election is decided. If the election took place today, Hillary Clinton would come out elected as president of the U.S.

But it isn’t Election Day and therefore it is interesting to place the debate in the perspective of the big political game that will be decided in November. Sunday’s debate format favored Donald Trump. Compared to the first and third debate, the second included a public of citizens, not members of any of the two parties, chosen by the Gallup polling firm and given the opportunity to ask their own questions.

The participation of those citizens in a presidential debate expresses the democratizing tendency (not necessarily for the good of U.S. policy) that seeks to appeal to the common citizen as a way of legitimation. It is convenient to recall that the U.S. political system and the Electoral College as a mechanism to elect the president respond to a Republican design. That configuration underlined the filters of representation, and the slant in favor of a mechanism of decision dominated by the elites and skeptical about the wisdom of the masses. Perhaps the most important debate in the history of the United States, Abraham Lincoln versus Stephen Douglas for the Senate seat of Illinois in Congress in 1858, was not focused directly on the voters (at the time the senators were elected by the state assemblies) but rather on proposing ideas that would lead them to win over the political elites of their state. The idea of the town hall style debate, as the one that took place in the second presidential debate, is the democratic show of common citizens asking questions to the future president.

The town-hall format allowed one nominee, who presents himself/herself outside the system and has experience on television, like Trump, to move with more space than his/her rival and connect with the feelings and attitudes of the mean U.S. voter who as an average is center-right.

Trump’s new play was that of discrediting his rival for the post as being disconnected from the U.S. people and at the service of special interests, making references about the confirmation of the reports against Hillary Clinton made by her former rival for the Democratic nomination, Bernie Sanders. It seems the idea is to encourage in that sector the disillusionment and abstention, so that the Trump followers get ahead of Clinton not because of empathy but rather in intensity of support.

Hillary Clinton again looked more precise and prepared in her proposals, more president-like. Will it be sufficient? It depends on the mobilization capacity of her electoral machinery which up until now seems to be working. Readers can expect a greater use of Bernie Sanders and the most left-wing sector of the Democratic Party in the campaign to attract the generation of the millennium, the young people who talk a lot but vote less. Pay close attention to the minorities, the Hispanics and the blacks who overwhelmingly favor Hillary over Trump but do not show the same enthusiasm as the middle-class women in terms of her candidacy.

A third important definition is that of “change.” If by change it is understood changing the electoral tendencies with the performance in a debate, it’s a very high goal for any nominee. If what it’s about is to look at least capable of effectively debating some points, and stop the nosedive, the mark to pass is very low. On Sunday, Trump looked capable of demonstrating the weak points in the Democrat’s argument, like the anti-Russia distraction, the irrational effort to back any opposition to authoritarian regimes without questioning their democratic credentials (the cases of Libya, Iraq and Syria, where the Islamic state has gained a ground it did not have during the governments of Gadhafi, Saddam Hussein and Assad). Trump’s rhetoric on specifying what is first and immediate, the protection of U.S. power and security, prevailed above other considerations.

But none of that is enough to change the reality that the big story behind the election continues being a referendum on Trump and his bet on taking back the country to more right-wing visions, to what some call defense of a white nationalism and identity, on the topic of relations with the minorities and migration, and a more isolationist position in foreign policy. With that theme, the Republican Party has a lot to lose, possibly beyond the presidential sphere, including the Senate. An autopsy report about Mitch Rommey’s defeat in 2012 made by several Republican barons and analysts warned the leadership that the party needed to compete for the Hispanic votes and improve the perception about the minorities on its agenda.

The decisive word in Trump’s slogan, “Make America Great Again” is the last one (Again). It is a story based on the nostalgia for an era in which the white cultural, protestant and Anglo-Saxon supremacy was an accepted premise, in a world in which the United States could count on the ability to connect with the world in the time and space it chose. Today the United States is a different nation in an also different globalized world. The fertility and migration rates point to a population in which the minorities become the majority, in which the gender-related rights and sexual preferences are increasingly more accepted. A nation in which Barack Obama’s presidency is not an exception but rather a watershed for a still more multicultural future, even in the improbability that Trump wins next November.