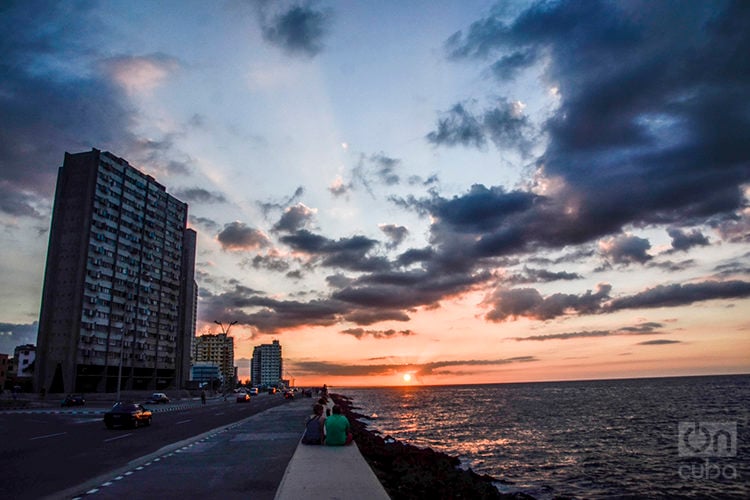 The guagua (bus) was several hours late to ferry us to Viñales. Pero, es Cuba (But, it is Cuba...), our indomitable leader— and soon-to-be lovingly nicknamed “Doña”—Cherie, reminded us, throwing her hands in the air. Before long, we would be more than accustomed to lines as national sport, Cuban GPS (i.e. calling out the window for directions), and waiting for our charming 80s-style bus, embellished with red, round sun and wave print on its side.

For the moment, we ten cubanoamericanos exchanged our dollars for CUCs and gathered outside the José Martí International Airport learning each other’s histories, staring into the blue sky and car after old-fashioned car, exhaust seeping into our pores.  After a lifetime’s worth of stories and black and white photos from every corner of the island, we had arrived.

Suddenly, Cherie approached me. “Your mom called three times, but she said it’s not an emergency.” My father had been in the ICU for the past three weeks, so my heart lurched, regardless. She handed me her phone as the whir of incoming tourists circulated around me. I pressed the screen to my ear and struggled to hear the doctor relay the news via speaker. The bone marrow biopsy confirmed his diagnosis as multiple myeloma. He was simply too weak for treatment and would not have much longer to live.

Among the scattered cacophony of Spanish and English voices, the question loomed: should I fly home or remain on the trip? This journey I dreamt about for most of my life, this particular trip I had so serendipitously landed on. After all, I originally applied to CubaOne’s TuCuba program with specific interest in the voyage to Santiago de Cuba, where my mother is from, connected to my new play in development, Azul. However, a cancelled July trip and a November production meant I would go to Cuba with the third cohort in December 2016 and begin the New Year in La Habana, where my father was born.

My mother and sister each took turns on the line. “He wanted you to go. We think you should stay.” I felt my face grow hot and my vision blur as I ended the call. Sobs erupted from within me and, unthinkingly, I swung my arms around Cherie. It’s a beautiful thing, how grief can connect strangers. I collected myself, slowly stepped away from her embrace, and rejoined the group. For better or worse, I would stay.

What unfolded was certainly for the better. What our group found was not always sunny, but often complicated and difficult—each of us faced with scattered pieces of our legacies and contradictions to lessons taught by our families in billboard-sized frames. Every day we would return to our casas struggling to neatly process and package what we had seen and felt that day, knowing in our hearts that none of our experiences could be unknotted or defined.  Cuba is not black and white—but nothing is, so how could we expect our mother country to be any different?

And yet, from Yurisandy, the cowboy, who led us through Viñales and greeted every man, woman, and child we passed, to New Year’s Eve camaraderie with Cuban millenials on a rooftop in La Habana Vieja, to meeting my tia-abuela, my father’s tia for the first time in Cerro-Habana, I felt, to paraphrase Maria Karla of Vélo Cuba, a local bicycle touring company, “people are more connected here than in other places”.

And despite all the political complications, at the end of the day, there we were: a group of cubanoamericanos warmly welcomed into Angel and Gilda’s home in Vedado for food, drinks, and several rousing games of dominoes. And let’s not forget the couple who stopped a crew of us harmonizing into the early morning darkness and requested “I Will Always Love You” because Whitney Houston is a universal language. Or, the rapper from Santiago who reminded me, when I said my mother was also from there, that we shared “mucho corazón.” All of this felt like starting over, like the long lost peeking over the string of lights at the lot of us—Cubans, Americans, and everyone in between—smiling at this lineage of souls full of movement and rum. In the wise words of my 95-year-old Tia-Abuela Blanca, “una nación allá y una aquí, pero somos familia (one country outside, another inside, but we are a family)”.

On one of the early days of the trip, one of our fellows who is Cuban-born, but who had not returned to the island in over 10 years, mentioned that he often felt like he was “living on a boat between Cuba and the U.S.,” but after our journey, he felt more Cuban. You are Cuban, I assured him. He looked around at each of us from our respective seats on the bus. “We all are,” he replied.

A day after I returned to the United States, my father passed away. I cannot think of a better way to have celebrated him than to have gone to the place where he was born and begun an ongoing relationship with the island and the people that bore him—and me.