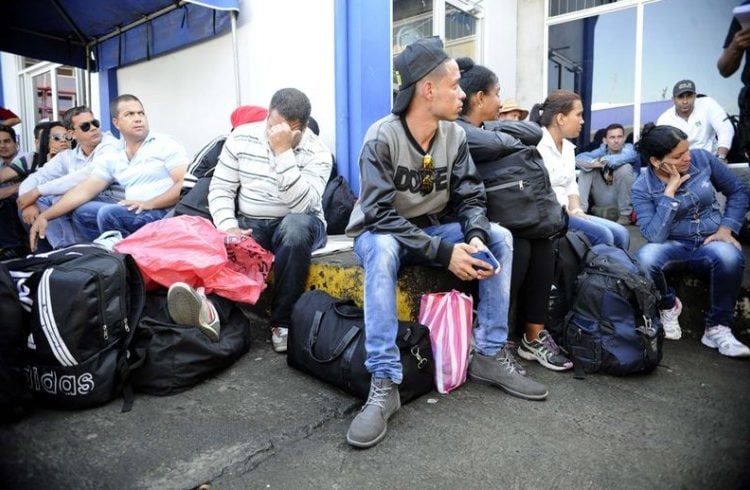 The United States has started returning, through charter flights, Cubans who illegally arrived in its territory after the elimination of the “wet foot/dry foot” policy.

Up to now the persons who have been expelled were two women, who arrived in Havana on Friday on a flight chartered by the U.S. Immigration and Customs Enforcement (ICE).

Wilfredo Allen, the lawyer of one of the women cited by El Nuevo Herald, said both women had arrived to Miami’s airport with European passports and were detained after requesting asylum.

Allen said they were deported despite having asked for the suspension of their request and the possibility of voluntarily returning to the island. In the lawyer’s opinion, with this the ICE “is trying to send a negative message.”

Since the coming into force of the new migration agreements between Cuba and the United States, the U.S. authorities had used commercial flights to repatriate the Cubans who did not meet the legal requirements to remain in the country. Until now some 40 persons have been returned through that means.

This Friday the U.S. Coast Guard also returned to the island 11 Cubans who had tried to get to the U.S. by sea. They were returned to Bahía de Cabañas, on the northern coast of the province of Artemisa. With them the number of repatriations by sea after the end of the “wet foot/dry foot” policy amounts to 75 persons.

The deportations to Cuba from U.S. territory are added to those carried out by Mexico and other Caribbean nations. Since January, the Mexican government has returned to the island 264 Cubans who were in the country illegally, while another 144 were rejected after trying to enter by air.

Meanwhile, 117 persons have been returned to Cuba from Bahamas and 39 from the Cayman Islands during the same period. This makes for a total of up to 979 repatriated persons in 2017.

According to the U.S. Coast Guard, since October 1, 2016 more than 1,900 Cubans have tried to reach U.S. coasts on diverse types of vessels. However, the institution recognizes that the flow of immigrants from the island trying to cross the Florida Straits has significantly decreased since January 12.

In January of last year, 3,846 Cubans arrived in the United States without a visa. But in January this year only 426 Cubans were considered “inadmissible” by the Customs and Border Protection (CBP) office. Meanwhile, around 1,400 Cubans legally entered U.S. territory, according to figures cited by El Nuevo Herald.

The “inadmissible” Cubans who arrived after the change in immigration policy “are in the process of being expelled or have been given the opportunity to withdraw their request” and voluntarily leave the United States, a CBP spokesperson explained.

At least 172 of them have been taken to detention centers, following an executive order issued by President Donald Trump that established the practice of detaining all foreigners with pending expulsion processes. The number of cases that have requested political asylum to try to legalize their situation is unknown.

White House spokesman Sean Spicer recently affirmed that the policy toward the island is being reviewed. A few days ago President Trump also affirmed he shared the points of view about Cuba of Senator Marco Rubio, one of the staunchest critics of the rapprochement to Havana promoted by Barack Obama.

However, although the current president has thanked the Cuban-American voters for their support and has promised to negotiate a better deal with Havana, he has not pronounced himself about the undocumented Cubans or about those who are still stranded in third countries with the intention of continuing to the United States.

Congressmen: the advance of the rapprochement “is inevitable”