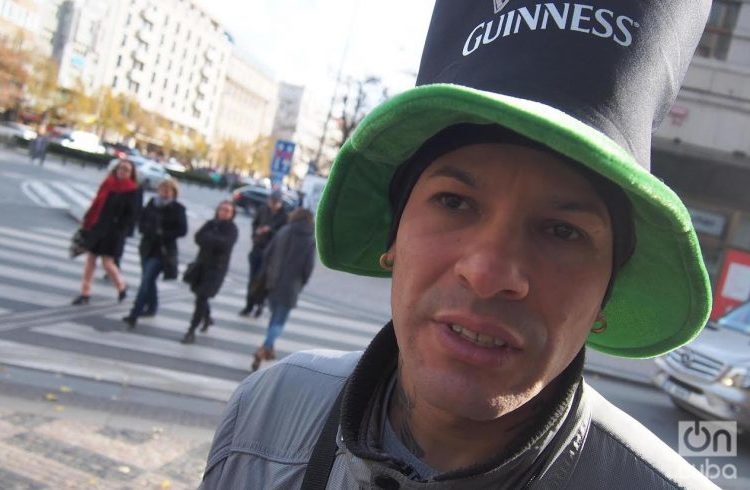 “They’re going to leave anyway. There’s the custom of leaving. If since January they can’t enter the United States so comfortably, they’ll go somewhere else. Perhaps they’ll come over here.”

Alberto Enrique says this. He’s writing now from a street in Prague. Last year, when the irregular Cubans were still let in at the U.S. borders, we met in the Czech Republic. We bumped into each other by chance. That’s when I started to understand why a Cuban community gathered in Central Europe, why a welcoming space was constituted here, what spirit sustains a policy of entrance only comparable to the one abolished by Obama in one of his last gestures in favor of the normalization.

Alberto Enrique wore a top hat. In the background, hospitable, Saint Wenceslaus of Bohemia occupied the place of honor in the very square where student Jan Palach immolated himself during the Soviet invasion of 1968.

“I know it’s a bit ridiculous,” he says pointing to the hat, “but it’s my uniform, and I wear it to earn money to eat.” The top says Guinness. It’s the beer propaganda, the dandy attire.

“I lure clients for a restaurant, I can’t complain. I’m doing much better than at the beginning, because then I spent five or six months without work. I spend the day on this corner, convincing the Czechs to come eat. But I don’t care, I’ll do whatever. In Havana I was a sketcher. I was a dancer. Then I dedicated myself to body building. I don’t have a permanent trade. I’m versatile.”

He says and laughs with the phrase, which seems clever to him. “I’m versatile; right here, in a neighboring city, I worked in an aluminum carpentry workshop.” All of a sudden he stops speaking Spanish, uses Czech to invite a couple of young men coming from the National Museum. They have eaten hot sausages in the kiosk by the tram stop. They continue their way down Saint Wenceslaus.

“Don’t think I speak Czech. I defend myself with a few words. This is not a language that you learn from one day to the other. You need five or six years to learn it. It’s the fourth most difficult language in the world.”

He likes to invent statistics. “This is the seventh most beautiful city in the world. The Castle is the largest in Europe. Czech women are the third among the most beautiful women. This country, you can bet on it, is the second friendliest toward Cuban emigrants, after the United States. For whatever reason, but that’s how it is.”

He said that. But that statistic is old. Could it now be said, when no one now dares to leave through Central America toward the Rio Grande, that the Czech Republic is the most hospitable, the only one that will let in Cubans because of their nationality? The way to get there remains to be established, naturally.

“I sold my house and that’s it? I went to Russia, like all those who don’t have a visa. And from Russia I left for Serbia. From Serbia I jumped to Hungary, where I was imprisoned. The person who was with me took a wrong turn, can you imagine! We asked for asylum in Serbia, and we spent a month there. The process was long and uncertain, that’s why we again jumped the border, and that’s how we came here. I knew that Cubans were given papers here. That’s why I am thankful to this country. The immigration officers treated us very well.”

“There’s a Cuban community, but not many Cubans are united here. There are businesses that exploit Cuban dance and culture. There’s the Bodeguita and another place was opened, the Macumba. But they’re not all Cubans. The owners are Czech.

Tropical salsa is not danced in Prague’s Macumba. It’s the same music, but the choreography is stylized. They use sinuous gestures. It’s Russian salsa. Prague’s Bodeguita barely proposes a few Cuban dishes on the menu. It’s a bodega of international flavors a few blocks from Franz Kafka’s house. There aren’t too many Cubans among the clients. In the service, yes. Dance teachers, waiters, lurers.

“If you don’t know the language the Czechs already don’t treat you that well. Many of them like the Cubans, but the emigrant always has problems. I live with a Cuban girl. A Czech one, no sir. I don’t want any more Czech girlfriends. I had one and I’m not going to repeat it. They don’t understand us, we don’t understand them.”

He says that and specifies, along the way, that he won’t leave Prague. He writes this to me from a street on the way to Saint Wenceslaus Square.

“I don’t know if the Czechs will change their policy now that the Americans have changed theirs. But up to now this is the only European country that legalizes Cubans without having to wait too much. Other people have to get married, they have to invent. Cubans don’t. They get here and they tell them, ‘Here, take you papers.’ It could be because these people have such bad memories about the Soviets, who knows.”