Protestón and Cuban, Jorge Medina pedals against the embargo in Miami. 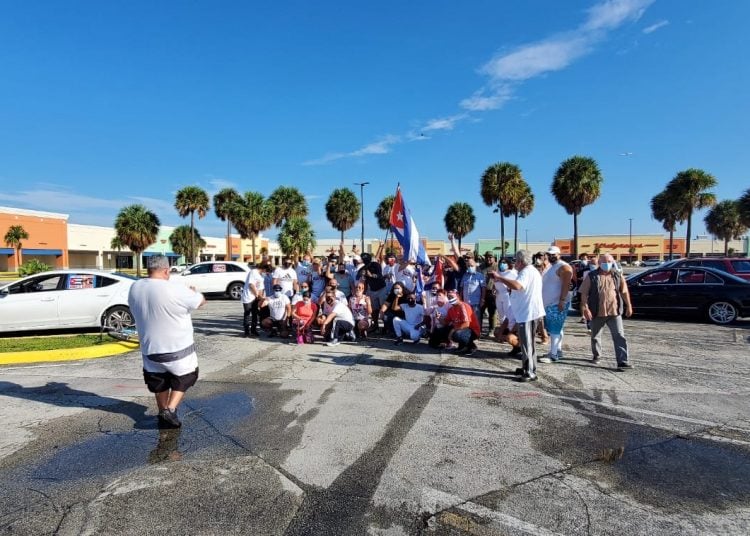 “I’m going to do my bike ride in Miami. If you think it’s worth protesting against the embargo on Cuba, you can join. I’ll be there at 8:00 a.m. in the parking lot of the old Kmart, in front of the Casino on Norwest 7th Street.”

That was the announcement of Jorge Medina, better known as Protestón Cubano (Cuban complainer), on his YouTube channel, on July 17. The night before he had seen, for the first time since he left Cuba, the program Mesa Redonda. That night he wasn’t the only one connected to the Cuban television broadcast. Many people were seen watching (against all odds) the island’s channel, as they were alerted about new economic measures.

The images of Cuba, the latent shortages and those to come, made him decide to take his bicycle and support several Cubans who had demonstrated against the economic restrictions established by the U.S. government on Cuba.

Jorge was also supporting, as he said in that video, Cuban-American professor Carlos Lazo, who had started a trip from Seattle to Washington, to build Bridges of Love between the peoples of Cuba and the United States.

The first bike ride was held at the end of July and 11 people attended. Only 11, while many watched with skepticism from the live broadcast on the Protestón Cubano channel. Far from being disappointed or abandoning the idea, Jorge motivated those who followed him on YouTube: “Today we are 11, we will grow and we will be more. This has to be a torch that is being lit. There aren’t only 11 people who think like us. There are a lot.”

The bike ride became a caravan, due to the number of people who wanted to participate in their cars as well. The idea was to join, without political or partisan slogans, in favor of the Cuban family and against the embargo. So, on the second bike ride, between cyclists and motorists, there were about 50 people. The idea was to have a set date. It was decided it would be on the last Sunday of the month, at 8:00 a.m.

Before departure, the hymn is sung. Always the hymn of Bayamo: “The Homeland proudly contemplates you.” Cars, bicycles, clothes…have the Cuban flag stamped on them. In a city like Miami, where the Cuba issue is so controversial and where the slogans of the so-called historical exile have been repeated for years, and today what certain influencers say is repeated, going against the current is, at least, a rarity.

Sometimes you just need that: someone to light the wick and wake up others.

Jorge Medina, the Protestón Cubano, left Cuba in 2002. His life has been anything but boring. In 1993 he was imprisoned in Villa Marista for putting up posters against the Cuban government. On his first return to Cuba, in 2012, after 10 years of living in the United States, he went to march with the Ladies in White, he met Antonio Rodiles, he wanted to experience the opposition…. The trip made him discover, among other things, that that discourse did not represent him, that his voice was different.

In 2015, on August 25, he started his YouTube channel. From the beginning, he had the name that represents him and by which he is still known: Protestón Cubano. “I started it by campaigning against Trump, who was running for the 2016 elections. What he was doing was one more criticism of my people, of the Cubans who were supporting him.”

On that 2015 Thanksgiving night, Jorge was awakened by the alarms of the firefighters: a Molotov cocktail had been thrown at his car from the side. He couldn’t prove that the event is related to his youtuber activity; what he does have proof of is that in broad daylight, on February 29, 2020, when he went to report on the caravan called by the also youtuber Alexander Otaola, the police took him out of the place before other Cubans like him lynched him. “They staged an act of repudiation against me when they identified me,” he says.

Photoshop montages and various memes of him have been made, trying to offend him. He takes it with humor: “To some of those who send me photos of myself to ridicule me, then I tell them to help me make the images for my channel, for example. And since they see that I don’t respond annoyingly or aggressively, some have even edited images for me.”

A person is more than his individuality. As John Donne said: “No one is an island unto himself.” Jorge Medina has had family support on his channel: his father, Jorge Luis, his cousin Evelio, his friend Felipe, who has also coordinated the support of other influencers for the third convocation of the caravan.

Professor Carlos Lazo, among others, supported him from his Facebook account and in direct dialogue on the YouTube program of Protestón Cubano: “This bike ride that you are doing and the one I did, which has been the same, is for that family, and for the unity and love among all Cubans, regardless of the political positions they may have, because the idea that many have of the blockade, which are sanctions that seek to limit the money that enters for the Cuban government, in truth what it does is suffocate the Cuban people,” he said. 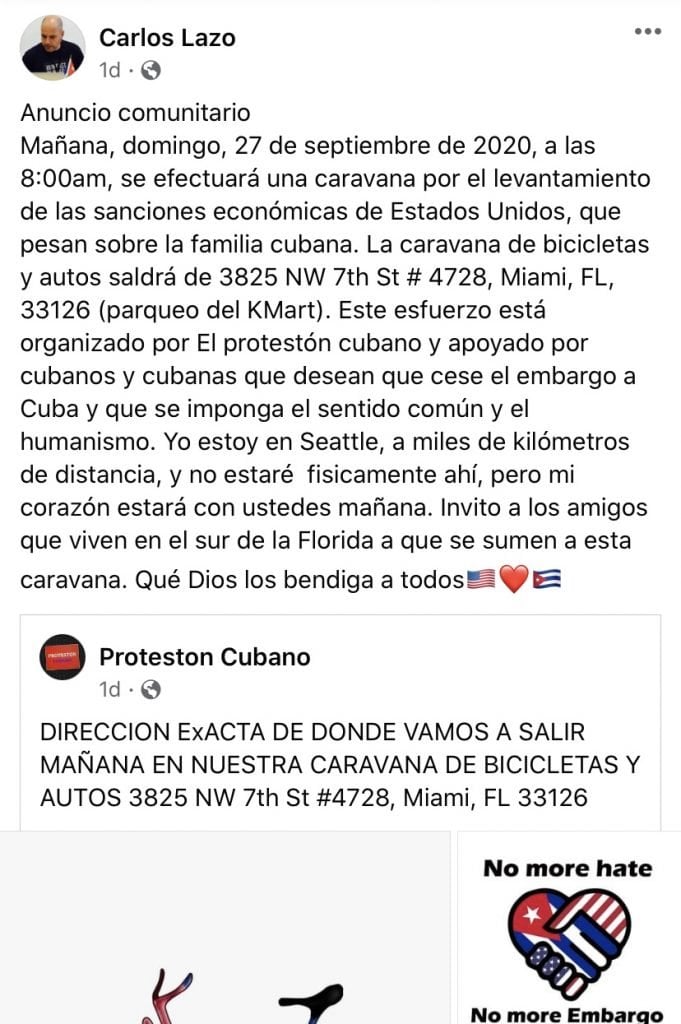 On Sunday, September 27, Jorge got back on his bike. He thought of his mother, his sister and his nephews, who are in Cuba…of his six-year-old daughter who lives in Miami. And he went pedaling against the embargo.

This third time more people joined, more than 200. They were young, elderly people…. There were used cars, the so-called transportation, last year cars…. And it seemed that everyone knew each other. At least everyone greeted each other.

They might be that those who announce a change are right, after all. Maybe not the one they proclaim, but who knows if the change is already here.

Last day of September: 73 new contagions from COVID-19 in Cuba