In the midst of the disaster, the most interesting thing was that Americans were able to verify something that could be dangerous: for the first time in presidential elections, two candidates, with totally opposite views on what the United States should be, have made their presentations. 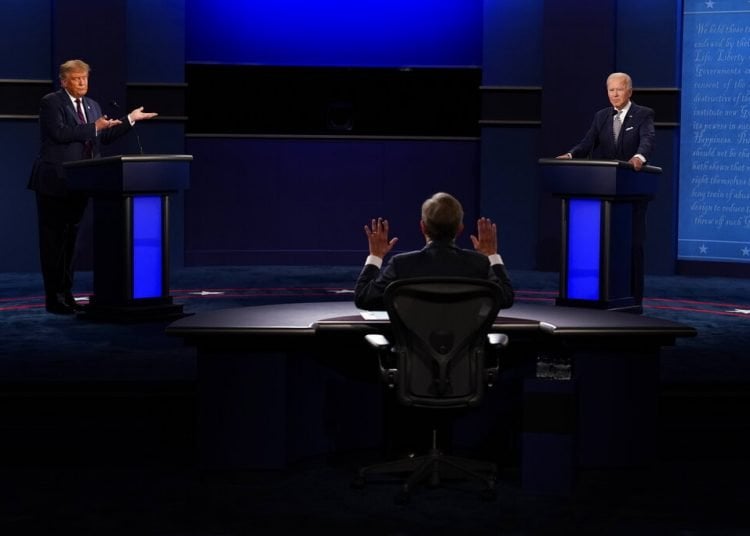 The first presidential debate began with a soft tone. From a distance, President Donald Trump greeted his rival, Joe Biden, with a wave, and the Democrat replied amiably, “How you doing, man?”

From there, the dialogue, if you can call it that, went downhill. It often became a veritable exchange of insults, shouting that eventually made it impossible to hear what was being said.

Perhaps the most red-hot issue was that of violence in the streets. Trump refused to condemn white supremacists. “This is not a right wing problem this is a left wing,” he said. Contrary to Trump’s narrative, experts on domestic terrorism, including FBI Director Christopher Wray and Acting Secretary of Homeland Security Chad Wolf, have testified before Congress that white supremacist violence constitutes the most persistent and dangerous domestic terrorist threat facing the country.

But the racial issue also came up, in which Trump was hyperbolic, as usual. “No one has done more than I have for the black community. I’m releasing people that you put in jail and treated badly.” The president was referring to a legal reform that Biden promoted in 1993 in the Senate Judiciary Committee and that the African-American community received very badly. Trump took advantage of the moment to question whether or not the former vice president supported the police force.

It took the moderator, Fox News host Chris Wallace, to intervene so that Biden could explain himself. “There’s systemic injustice in this country, in education and work and in law enforcement and the way in which it’s enforced. But look, the vast majority of police officers are good, decent, honorable men and women. They risk their lives every day to take care of us, but there are some bad apples. Violence in response is never appropriate, never appropriate. Peaceful protest is, violence is never appropriate.”

When Wallace asked if the vice president supported the Black Lives Matter movement, Biden brought up that the violence in the streets has to do with the president’s lack of dialogue capacity. “I have been clear that violence must be prosecuted. He doesn’t want to calm things down instead of going in and talking to people and saying, ‘Let’s get everybody together. Figure out how to deal with this.’ What’s he do? He just pours gasoline in the fire constantly and every single solitary time But he’s never called the leaders of the riots [to talk]. He has not brought people together and is constantly fueling the fire. And by the way his own former spokesperson said, ‘Riots and chaos and violence help he cause,’” Biden said, looking at the camera, which he did repeatedly during the debate.

Trump denied the former vice president’s assertion, but he attributed the expression to his former adviser Kellyanne Conway, who used to appear on television shows assuming the defense of the president and who, certainly, said the phrase.

Another hot spot was the COVID-19 pandemic, which has become Trump’s weak point politically. A majority of Americans have consistently disagreed with his insistence on a speedy reopening. Many voters don’t think they can trust him.

Biden recounted how Trump backtracked and changed his position from February until today, and recalled that he did not inform the public about the severity of the pandemic because he did not want to cause a “panic” in the public when “he panicked. He went in and we were insisting that the people we had in the ground in China should be able to go to Wuhan and determine for themselves how dangerous this was.”

According to Trump, the Democrats wanted to shut down the country “until after the elections. He wants to close and I want to open.” What’s more, “we built the greatest economy in history. We closed it down because of the China plague. Look at what’s going on with alcoholism and drugs. Our country is coming back incredibly well, setting records [with the increase in consumption] as it does it. We don’t need somebody to come in and say, ‘Let’s shut it down,’” added the president.

This seemed to make Biden slightly uncomfortable. He frowned and looked directly at the camera with his finger at the ready. “The idea that he is insisting that we go forward and open when you have almost half the states in America with a significant increase in COVID deaths and COVID cases is a mistake. You can’t fix the economy until you fix the COVID crisis. He’s never considered it a national emergency. He’s done nothing to help small businesses. Nothing. They’re closing. One in six is now gone,” said the former vice president.

On the validity of the electoral result, Trump said there is a conspiracy to take the presidency from him, that the result will take a long time to be known, and said he wants his supporters to monitor the work of the polling stations. “I’m urging my supporters to go in to the polls and watch very carefully. If it’s a fair election, I am 100% on board. But if I see tens of thousands of ballots being manipulated, I can’t go along with that,” and he added that in Virginia thousands of ballots were thrown into a river.

He didn’t provide evidence or say the name of the river.

Biden was more level-headed. “Since the 1700s the military has voted through absentee ballots,” he said.

At the end of the day, in the opinion of several analysts, chaos is the word that characterized the first presidential debate. Undoubtedly, what was distinctive was the violation of the rules of the debate, negotiated by both sides for months.

Wallace criticized the candidates for their interruptions, but it was clear that the president had the upper hand in that department. Trump disobeyed agreed ground rules and refused to allow Biden his two minutes to answer questions. He even made Wallace exclaim at one point, “Mr. President, can you let him finish, sir?”

Wallace did something unusual for a presidential moderator: stop the debate. “The country would be better served, if we allowed both people to speak with fewer interruptions. I’m appealing to you, sir, to do that” he told Trump.

“Well, and him too?” the president responded defiantly.

“Well, frankly, you’ve been doing more interrupting than he has,” replied the moderator.

“This was, without question, the single worst debate I have ever covered in my two decades of doing this job,” said CNN political commentator Chris Cillizza.

The most interesting thing, however, was that the Americans were able to verify something that could be dangerous: for the first time in presidential elections, two candidates, with totally opposite views on what the United States should be, have made their presentations.