What was the question? Was there, in fact, a question? 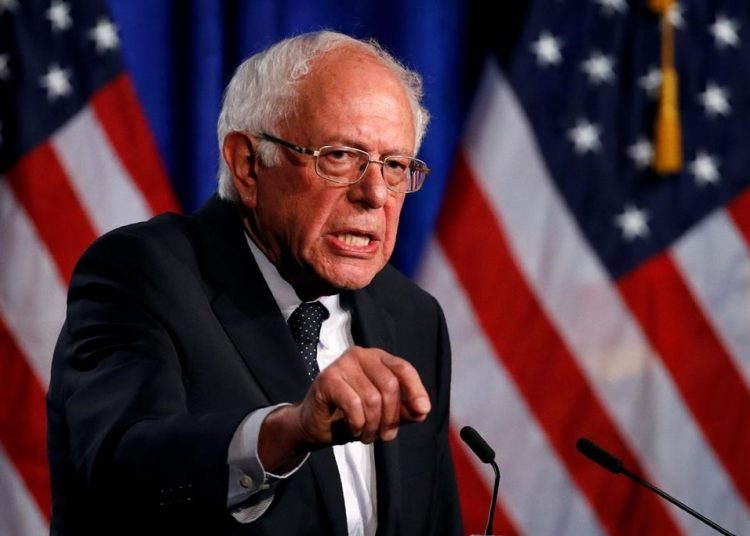 Just one day after Bernie Sanders’s victory in the Nevada Democratic caucuses, Anderson Cooper asked the Vermont senator in a 60 Minutes interview to clarify statements he had made about Nicaragua and Cuba in the 1980s.

We see two old grainy video clips, we hear Anderson Cooper’s offscreen voice explaining to viewers the positions that Bernie Sanders had articulated at the time. We see a forty-something Sanders, with longish gray hair and no tie, and the glasses with the black plastic frames he wore at the time. Only towards the end of the second video do we hear Sanders speak a complete sentence for himself, and he is talking about the Cuban Revolution and Fidel Castro: “He educated the kids, gave them health care, totally transformed the society.”

Almost forty years later, in this moment in the interview, viewers are meant to understand that a great deal depends on Sanders’s answer, that the elderly man in the coat and tie, the sparse white hair, faces a moment of truth. The older man meditates on the naïve and simplistic declarations of the younger self, and his choice is clear: he must plant his feet firmly on the mainland and advocate for democracy and human rights (things we tell ourselves the United States represents), or step out on to an island adrift in the Caribbean and cast his lot with the dictatorship and its history of repression. Anderson Cooper’s question, in other words, is grounded in standard Cold War binaries.

But let’s pause the video briefly and think this through before we hear Sanders’s answer. What was the question? Was there, in fact, a question? Cooper did not invite Sanders to reflect on his own intellectual and political evolution, or to judge US foreign policy towards Cuba, or to reflect on ethical measures, or geopolitical strategies, or historical errors. He literally did not ask a question. Forty years ago Sanders had shared a relatively simple, historical narrative about a tremendously complex process. And Anderson Cooper’s “question,” which never actually gets articulated but that the viewers understand, comes down to this: “Will you or won’t you retract?”

In this made-for-television moment, the very last thing that 60 Minutes  or CBS wants is a thoughtful discussion about a rational, constructive foreign policy towards Cuba. The last thing the network and its viewers want is a sophisticated reflection on complex foreign policy matters. The question—which is to be expected in this platform and under the ordinary pressure of advertiser dollars—is all about raising the fever, inflaming passions, stirring things up in South Florida, and bumping up the ratings.

To be fair, it would be difficult for any program on commercial television to sustain a thoughtful discussion of Cuba smack in the middle of an election season. The viewership, on one side, is an English-speaking population with limited understanding of Cuba, a population at any rate much more concerned about domestic matters, and on the other side, a Spanish-speaking population with roots in Southern Florida, a small fraction of the US population whose elected representatives and media outlets are even less interested in fostering a sophisticated difficult dialogue that challenges Cold War binaries or Cuban exile orthodoxy. They are dead set against such a thing.

Sanders’s answer, then, as we should expect, is limited to just two or three sentences. “We’re very opposed the authoritarian nature of Cuba. But, you know, it’s unfair to simply say everything is bad.” Clearly on the defensive, Sanders repeats the narrative of forty years ago. He talks about Fidel Castro’s literacy campaign. Cooper counters with a point about imprisoned political dissidents and Sanders replies clearly, without hesitation, “We condemn that.” Sanders goes on to talk about Trump and his romances with dictators like Kim Jong-Un and Vladimir Putin—and Cuba recedes. Putin’s name leads the interview to the discussion of Russian interferene in the US elections.

What might have been the best response? What response would satisfy potential Sanders voters? Much will be said and written about this in the coming days and weeks. The New Yorker published an essay just days after the interview called What Bernie Sanders Should Have Said About Totalitarianism and Socialism in Cuba. Sanders should have shown more empathy for the trauma of Cuban exiles in the United States. Undoubtedly true. After denouncing an authoritarian regime and its human rights violations, it won’t do to to talk about the Revolution’s accomplishments, as if these somehow “balanced” the historical record. Completely right. Talking about Trump’s disgraceful pandering to dictators in other parts of the world doesn’t actually clarify anything about Sanders himself. Undeniably true.

But the question of what Sanders should have said is not the one I want to explore here, because if the interview succeeded in exposing the limits of one candidate on the question of Cuba, something much more significant and troubling was revealed about our own capacity to discuss Cuba at all, with any degree of seriousness or responsibility. What Sanders should have said does matter, but here I want to explore something else: What should have been asked? Which questions would have told viewers something relevant to the role of a potential president on a foreign policy matter?

If a serious, honest critical evaluation of a self-proclaimed socialist revolution and of the measures the United States has implemented in response to it cannot be undertaken on US television, we should also recognize that none of the presidential candidates is up to the task. Presidential candidates by and large are not historians or area studies specialists or human rights theorists, there are almost two hundred countries in the world, and candidates should be expected to discuss the most pressing foreign policy questions rather than to elaborate a comprehensive historical understanding of the Cuban Revolution or the Iranian Revolution or the Syrian Civil War.

More relevant questions, then, might include: Given that we all “oppose the authoritarian nature of Cuba,” what foreign policy would be most constructive? What Cuba policy would inflict the least harm on ordinary Cubans? Given that we recognize the systematic violation of human rights in Cuba, can we also recognize that a foreign policy calculated, since its earliest articulation in 1960, to “bring about hunger, desperation and the overthrow of government” in itself constitutes a violation of human rights, and quite possibly a crime against humanity? Can we finally recognize, with the rest of the world, what the United Nations calls the “necessity of ending the economic, commercial and financial embargo imposed by the United States of America against Cuba”?

And even if we imagine that human rights violations perpetrated by the Cuban government are worse than human rights violations perpetrated by the United States and other nations (not something to be taken for granted by any means), is there any reason to imagine that the nation with the largest economy in the world should serve as sole judge, jury and executioner? Should the judge, jury and executioner be the nation that tortures prisoners in the Naval Base at Guantánamo, or a country in which thousands of people are allowed to die every year because they lack access to health care, or where children are being held in concentration camps on the border with Mexico?

Questions about the human rights record in Cuba, in other words, must not be decoupled from questions about the authority of the United States to enact punitive measures. It is only licit to invite candidates to the presidency of the United States about human rights violations in other nation states if such an invitation is framed in terms of the relevant policy questions, such as: Is imposing “hunger and desperation” on a civilian population ever justifiable? If we ask candidates to discuss human rights violations beyond our borders, the questions must be framed in terms of the relevant policy questions and the human rights implications of those policies.

Bernie Sanders’s recent comments about Cuba have exposed his limitations as a historian, an area studies scholar, and a human rights theorist. He is too invested in a discourse that “balances” human rights violations with achievements in other areas, a discourse that might allow us to argue, for example, that the United States holds children in concentration camps, but the United States also has excellent Head Start Programs. We should reject this entire category of reasoning.

But we should be more disappointed in ourselves than in Sanders, more disappointed in our own incapacity—the incapacity of our news outlets and elected politicians—to ask the most important questions, to extend the discussion of human rights into a properly international context, to the role of the United States in the suffering of the Cuban people, our incapacity to extend our concern for political prisoners, for example, to people experiencing food scarcity as a result of the embargo.

The limits placed on the public discussion in the United States are largely self-imposed, or imposed by the commercial nature of our news outlets and by the kind of self-censorship we have inherited from Cold War discourse. And if Bernie Sanders has failed to overcome the romantic leftist version of that Cold War discourse, so too have his harshest critics failed to overcome those inherited binaries, the self-congratulatory imperialist assumptions, the jingoistic discourse that takes for granted the status of the United States as the “greatest country in the world.”