The General Directorate of Provincial Transportation of Havana has deployed dozens of inspectors at bus stops in the Cuban capital to control that state cars transport citizens who need it. 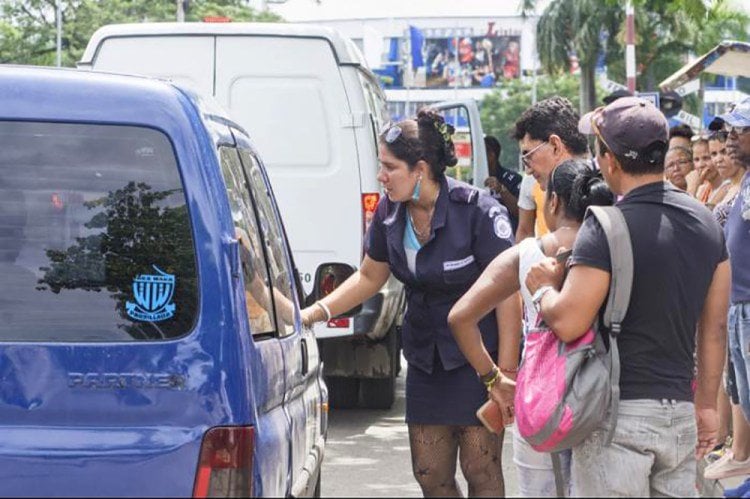 The Cuban authorities have applied 773 sanctions to enterprises, most of them state-owned, whose “unsupportive” officials did not stop their vehicles to pick up other people, in the middle of the economic crisis and the shortage of fuel affecting the island.

The measures were announced by the General Directorate of Provincial Transportation of Havana (DGTPH), which has deployed dozens of inspectors at the saturated bus stops in the Cuban capital to control that vehicles belonging to enterprises and state agencies, provided they have room, stop and transport citizens who need it.

Cuban President Miguel Díaz-Canel called on the drivers of state vehicles months ago to help alleviate the problems that the shortage of fuel is causing in the already overflowing public transportation.

Last October, a state media published a photo of the president’s official caravan stopping to pick up people waiting for a transport on a street in western Havana, and around those same days Díaz-Canel was publicly outraged with officials with state cars that pass by the crowded stops.

Buying a car is a luxury within the reach of very few in Cuba, where the State has exclusivity on the importation of new cars and taxes them several times above their market value, which in turn makes vehicles used have an exorbitant price despite decades being driven on the streets.

The churches don’t stop either

The DGTPH report for February indicates that “inspectors located at the busiest stops in the capital” reported that 983 state vehicles “did not have that gesture of solidarity.”

The general director of the DGTPH, Maribel Poulot, cited by the state-run Agencia Cubana de Noticias news agency, said that the senior executives of the infringing enterprises “are called to analyze the infractions and the measures applied to those responsible.”

The enterprises denounced include not only state firms, but also several religious institutions, from the Archbishopric of Havana to the Methodist, Nazarene, Pre-Baptist, Evangelical, Piarist Fathers, Churches of Cuba and Acacia Sisters churches.

Also listed are some of the most prestigious exporting enterprises in the country, such as Habanos or the Havana Club rum, as well as several firms and agencies attached to the ministries of transportation, tourism, public health, energy and communications, as well as the Armed Forces, among others.

The largest number of vehicles that did not stop at the bus stops belongs to the Ministry of Agriculture, according to data from the DGTPH.

Fuel in the spotlight

Cuba is going through its most severe energy crisis in decades due to the intermittent interruption of the arrival of oil ships to the country, something that the government blames on the United States for the intensification of sanctions on the island and its ally Venezuela.

Recently the government revealed that it was forced to buy a ship that brought a cargo of fuel already paid for by Cuba, but whose owner did not dare dock in the country for fear of violating the U.S. embargo.

To address this scenario, which causes long lines at the gas stations from time to time, savings measures were approved in the state sector, many of which the authorities are committed to maintaining even if the situation stabilizes.

The problems with diesel and gasoline have led to more bicycles and animal-drawn transportation on Cuban roads in recent months.

The island produces less than half of the crude oil it needs to meet its demand. For two decades it has received subsidized oil from Venezuela in exchange for the dispatch of professionals (especially doctors and teachers), but these shipments have collapsed in the last two years.

Fuel shortages have aggravated an already complicated scenario for Cuba, plunged into a complex economic situation due to the intensification of U.S. sanctions, the prolonged crisis in Venezuela, the inefficiency of the state business system and the loss of contracts for the export of medical services in several Latin American countries.