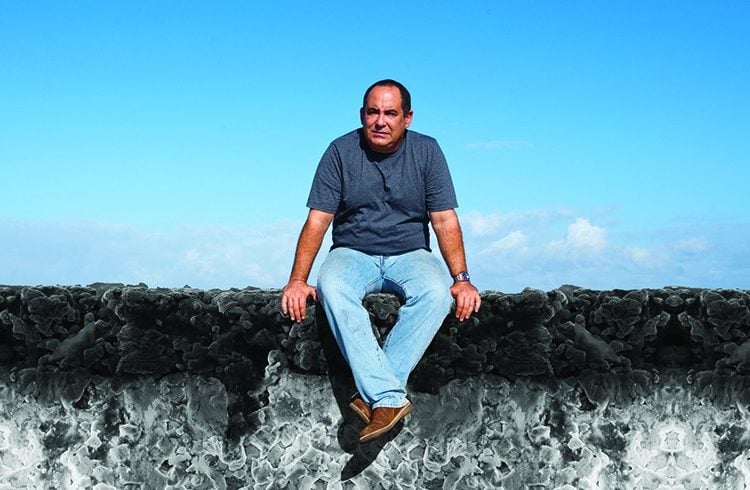 National Physics Award laureate Augusto Gonzalez is the brains behind a project that, for more than four years, has been combining images captured using electron microscopes with the portraits of renowned Cuban artists and scientists.

Electron microscopes are used to capture the images of tiny objects, the kind that cannot even be seen using traditional microscopes – structures as small as atoms, for instance. The result is not a conventional photograph but a representation derived from an electronic scan.

The peculiar beauty of the images thus obtained gave Gonzalez the idea of sharing these with other scientists and the general public. But many exhibitions of these types of images – affording us a glimpse at our microcosm – have already been organized around the world, so he thought of inviting a number of artists to put together art pieces, or appear in them.

“I don’t think they understand the process all that well, but everyone liked the idea a lot. Doing this, for instance, I discovered that Alicia Alonso is fascinated by science,” Gonzalez says.

The idea that science isn’t as removed from art as it appears to be is the inspiration of all of Augusto Gonzalez’s work. From 2011 to 2012, he also had the idea of producing Electrobacteriando, a song by Cuban electronic music band I.A., inspired by the movement of bacteria under the stimulus of optical pliers.

The music video was directed by I.A. members Iliam Suarez and Alexis de la O and was nominated under three categories for a Lucas Award.

The first time Gonzalez exhibited his Paisajes del micromundo (“Micro-Landscapes”), he obtained the aid of the Third World Academy of Sciences. UNESCO’s office in Havana provided the resources for the making of the music video.

Financing for these types of projects is almost always provided by foreign NGOs – but obtaining such financing isn’t always that simple.

“When we request financing from art institutions, they never consider our applications, because we’re not part of the established art world,” he explained.

These initiatives could help promote the sciences in Cuba, where many young people who pursue studies in the sciences end up leaving the field, either in search of better paid employment or to settle abroad.

According to Gonzalez, science can be promoted in two ways. The first way consists in elucidating physics, chemistry or math concepts and hoping this will expand people’s knowledge.

The other way consists, not so much in making people understand a concept, but in drawing their attention to a phenomenon, as is the case of the works that make up Paisajes del micromundo, which opened in Havana’s Fabrica de Arte Cubano at the beginning of April.