gloria
in Technologies of Communication and Media
1 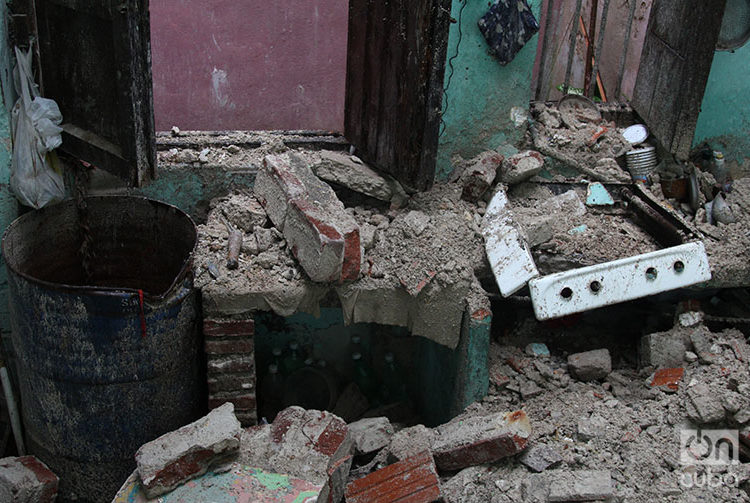 According to official reports, 24 homes partially collapsed, while other three collapsed completely.

The most affected areas were the northern municipalities of Centro Habana, Cerro, Old Havana, Plaza and Playa.

So far local authorities have reported that more than 400 state-owned buildings were affected, including schools, warehouses, bus stations and bakeries.

More than 1.400 houses flooded, over 200 water reservoirs were contaminated, and almost 40 electrical networks went out of service as well.

Some of the main streets had to be closed, including the underpasses in the Fifth Avenue and Linea Street. Many of the buses that were circulating during the storm broke down.

The official press reported two casualties: Julio Andino Arzonales, 23, from Old Havana, who was electrocuted by a fallen cable; and 79-year-old Marta Damiana Acanda, who drowned.

At 100 Florida Street, in the municipality of Centro Habana, an adjoining building collapsed and crushed the house where Ernestina Ulacia had lived for 47 years.

“We were in the house when it happened, my two daughters (15 and 24), my mother and I,” Ernestina’s daughter told OnCuba, “My mother, who is 71 years old, is hospitalized now. She was in the kitchen when the roof fell on our heads. She’s waiting surgery for her broken hip. Her two legs are also broken.”

The neighbours were helping them to collect what was left of their things: some clothe, dishes, silverware and a coffee maker.

“Two government officials came by yesterday,” she said, “but no one else has come. I’m wearing clothes people lent to me. I don’t know what’s gonna happen.”

“Somebody died over there,” a man said, pointing in the direction of Anibal Cabrera Fernandez’s house.

Anibal Cabrera Fernandez’s sister and mother-in-law were at the Marco Abreu Funeral Home in Zanja Street, waiting for the Medical Examiner’s Office to release the body. Anibal, 42, a cycle rickshaw driver, drowned near the Cuatro Caminos market in the storm.

“He wasn’t driving the rickshaw when it happened,” said his sister. “Apparently he was on his way home and the rain took him by surprise.”

The damages caused by the rain in the poor neighborhood of Jesus Maria have no parallel in Havana.

Alberto Betancourt Perez was the one who took Marta Acanda’s lifeless body out of her house and took her to the closest polyclinic. She is one of the two dead people reported by official sources.

Marta was 79. Her husband of 60 years, Patricio Armas Barreto is 81. On April 29, he was informed at midnight that his wife had died. He was outside Havana, in Guane, Pinar del Rio, Cuba’s westernmost province. He took a bus and was able to get to Havana at 2.45 a.m. Alberto and four other men had already rescued his wife’s body.

Alberto Betancourt also helped the people to build floating platforms when they saw that the rain was far from stopping, and the water level was over two meters. The kids were the first to be put in the makeshift rafts; other families took their children to houses in the upper floors.

On the outer walls of these houses, one can see the mark left by previous floods.

“We all feel abandoned here,” said Alberto. “There’s no one here to help. You’ll never understand it; you have to be here to understand how it is.”

The families that live in Gloria Street, between Rastro and Carmen streets, called the Fire Department and the Navy’s Rescue Unit. The latter told them that there was nothing they could do. No one came to help them on April 29.

Deisy Leon and her daughter, who live at 259 Rastro Street, did not lose their house, but they do not know what they are going to do to eat. Their rice, beans and other food supplies are ruined.

“These drains are all clogged. No one’s done nothing to fix that. We’re tired of this. We know we could have died like that lady, and nothing would have happened,” said Deysi Leon, while she took out the dirty water that accumulated in her kitchen and living room.

The next day, the situation was still alarming. At 11:00 a.m., nobody had come to unclog the drains yet. The sky was getting cloudy and the people were fearing that the worst could happen if it rained again.