The president has become a popular phenomenon dividing friends and destroying marriages. It doesn’t matter who’s right; what’s important is if they admit it. 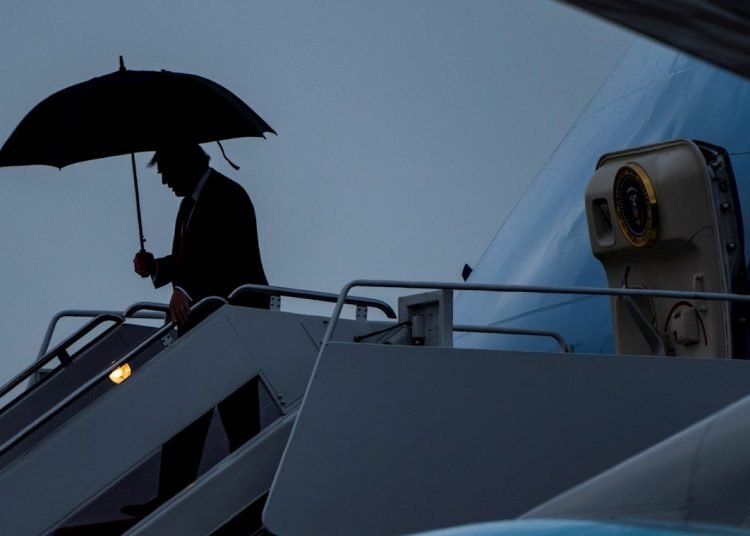 President Trump returns to Washington DC on Friday night after a visit to Miami. Photo: EFE.

Last Saturday two Cubans were arguing heatedly at a Hialeah window over two cups of coffee. The setting may seem childish, ordinary, and picturesque. Even cinematographic, if it’s about common places in the Cuban neighborhoods of Miami. But no.

At a nearby table, I closely followed the details of the conversation between two old friends who met in Havana and met again in Hialeah. What immediately caught my attention were two things: they were talking about politics and they had opposite positions about the man who came to Miami this Friday to say that he loves a Free Cuba and that “Cubans owe it to him.” I mean Donald Trump.

Of course, last week we still didn’t know what that president that some exiled Cubans love so much was going to say. Perhaps if they had a crystal ball they could make an effort, but they would also discover that what they consider a “free country” in Cuba is going to be delayed. It will take some time longer. Maybe because of their age they can’t see anything. They can be content to travel to the grave and that life remains the same.

They were arguing heatedly, as only Cubans know how, about whether or not Trump is going to solve the Cuban problem. I take out the notebook and begin to write:

One: I’m telling you, the man keeps his word, that’s going to be over now. They see the power of the Americans and they shit…they have nothing to defend. Look at the hunger there is.

Two: Demetrio, there is no hunger, there is a lot of scarcity, little variety, some fucking lines, but not hunger.

One: What are you saying, it’s said on television, that the people are hungry, look at the problem with the chicken, beef?

Two: What does that have to do with it? The television here is like the one over there, which says that the markets are supplied. The one here says the opposite: that there is hunger. It’s the opposite and it has always been that way. They are opposite televisions; they always end up saying the opposite. You know I was on a visit, I had to take a bunch of basic need products. But I didn’t see any hunger.

One: Because you didn’t want to, Daniel, you spent all the time doing foolish things, like taking your mother to restaurants and shopping…as if you were in Miami.

Two: No! They are closed there, like ours now. I don’t see the difference. We are the same, staying at home, a lot of rain, and nowhere to go. This corona is very democratic, a brother-in-law who works for the government told me. He told me: “Now we suffer equally.”

One: What the heck. Here we are better off, this is transitory. Going back to Trump, that is the man: he takes care of us, he fights for us, look at how he has those people cornered, he doesn’t let them move. The people are already up in the streets, Univision said so the other day.

Two: Then watch Telemundo so you can see that it’s the same with people here. Not in Miami, but in the rest of the country and against Trump.… I don’t understand how you can say that. We are all screwed now in Yuma: there’s no work, we can’t move, everything is restricted, the kids can’t go to school.… And dominoes, what about dominoes? We can no longer have a game under the mango tree in your patio.

One: (Long silence). I’m leaving, no one can talk to you.

“These discussions between Demetrio and Daniel are anthological. I’ve been working here for six years and that’s every day. They love each other very much, but they always end up fighting. I’m about to believe that it’s one of Demetrio’s tricks because he always leaves first and then Daniel has to pay the bill,” says an employee who serves every afternoon at the window of this popular Hialeah cafeteria, called Anita, as I read on the plastic badge on her chest.

Behind these apparent political differences is a more serious detail. Donald Trump’s campaign doesn’t just divide friends and families. The propaganda that the president has deployed in South Florida is selling a reality that is not real, but what the Trumpists call “alternative facts.”

The idea began on the very day of the 2017 inauguration, when Kellyanne Conway, Trump’s publicist at the time and later his adviser, had a live discussion on NBC with Meet the Press host Chuck Todd about the number of people who went to the inauguration of the new president. Defending then-Trump press secretary Sean Spicer, who claimed that the opening ceremony was attended by more people than Barack Obama’s, Conway said that was not a falsehood, but an “alternative fact.” Todd replied, “Alternative facts are not facts, they are falsehoods.”

Obviously they did not agree, but a perspective on life was born that has accompanied Trump’s political trajectory from then to here and that opened the doors to lies as a trivial faits divers of politics.

A few weeks ago, a lawyer commented in a gathering of friends that several colleagues have told him that divorces are appearing in their offices due to political reasons. The differences between couples are mostly due to that. It’s like a verbal boxing match. One is Trump, another is Obama or Joe Biden. With serious fights: the lawyer said that they even last up to the reconciliation sessions prior to any divorce process.

“There’s something like a hallucination. People begin by believing what they want to believe. Trump is good for that. Believe, don’t waste time finding out the truth, consider that what you read on the Internet is the sacrosanct truth. And they fight,” the lawyer told his friends.

I was talking with psychologist Ana María Chávez. She explained that the marital differences of political nuance have more to do with the empathy for the politician and personal frustrations. “The example of the in-laws is key. They admire Trump, even if he does nothing to free Cuba from communism, but they follow him because he speaks to them in a different language. He promises what they have not been promised, but keeping his promises remains in the background. The important thing is what he said. He doesn’t take away the hope and the argument with friends and family that something is going to happen,” she explains.

A Cuban woman who just got divorced (let’s call her “Lucía”) admitted to OnCuba that she knows her husband is right when he explains that it’s necessary to vote for Biden, that Trump is lying. But she “loves” the president. Therefore, “I don’t feel like agreeing with him,” she says. They are going to get a divorce: the electoral environment is that simple.

The lie doesn’t matter; what matters is feeling good with the speech. Because, in addition, the usual ingredient comes to the surface: Castro. And Trump is, in Miami, the anti-Castro catharsis.