The planes will depart in the morning and afternoon and must bring back another group of citizens and residents stranded in Havana. 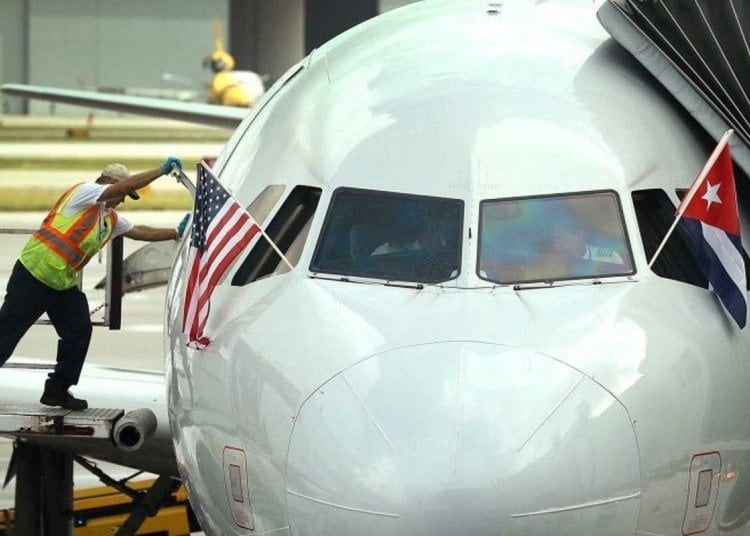 Next Friday, May 22, two repatriation flights will be made for Cuban citizens stranded in the United States as a result of the closure of air traffic between the two countries in the midst of the COVID-19 pandemic.

In a statement issued Wednesday, the Cuban embassy reported that the flights will leave from Miami, one in the morning and one in the afternoon, chartered in coordination with the Xael Charters and the World Atlantic airline.

The first flight, number WAL624, will leave Miami International Airport at 10 a.m. and arrive in Havana an hour later; the second, number WAL626, will take off at 2:30 in the afternoon arriving at 3:30. “This will make the return to Cuba possible of hundreds of our compatriots with the condition of regular residents in the national territory, who have been requesting help and were registered by our Consulate,” said the statement from the Cuban embassy in Washington.

The note does not indicate how many passengers will be returned to the island. But industry sources told OnCuba that they don’t exceed 230. The number could increase in the coming weeks. The statement indicates there could be other flights.

This repatriation has been possible with the cooperation of the U.S. authorities, who could take advantage of the departure of the planes to Havana to continue repatriating citizens and residents of the United States who are stranded in Cuba, despite the flights coordinated by Washington that brought back to Miami hundreds of passengers in recent weeks.

According to what the sources familiar with the flights told OnCuba, they are an operation in which the United States would be interested in bringing back U.S. citizens, and Cuba asked to use them to meet the requests they had. The same cooperation is not ruled out on future flights. As has happened with repatriations to and from other countries, consular officials often do not have an exact number of potential citizens to repatriate. Many try to stay in the country waiting for the mitigation of the coronavirus effects, but seeing that time goes by and nothing improves, they change their minds.

The Cuban statement also emphasizes that “the airline will ensure compliance with sanitary measures, with the maintenance of social distance and the use of the mask.” At the same time, it indicates that when arriving in Havana, the passengers will not be sent to their homes but “will be transferred to an isolation center, where they must remain for fourteen days” to comply with the preventive measures ordered by the Cuban health authorities.

For the time being, it is not known how much these one-way flights will cost. According to the same source, the Cuban Consulate prepared and delivered the passenger list to the charter operator, who at the end of Wednesday afternoon was still preparing the passenger manifest to be delivered to both countries’ aeronautical authorities.

Passengers who want to contact the airline and Xael Charters, should call the following numbers:

(In these last two, additionally dial 3 or extension 108).

They can also communicate by email: [email protected]

Also make or check the reservation through the website www.xaelcharter.com

The number of your Cuban passport will correspond to the code to request your ticket.

ETECSA: no “wrong pricing” in consumption of data voucher