Coronavirus: Cuba exceeds 10 thousand cases with a new record of 131 infections in one day

In total, the number of infected on the island amounted to 10,024, while the number of fatalities remained at 137 as there were no deaths from COVID-19 yesterday. In addition, 64 discharges were given, with which the recovered are already 8,976. 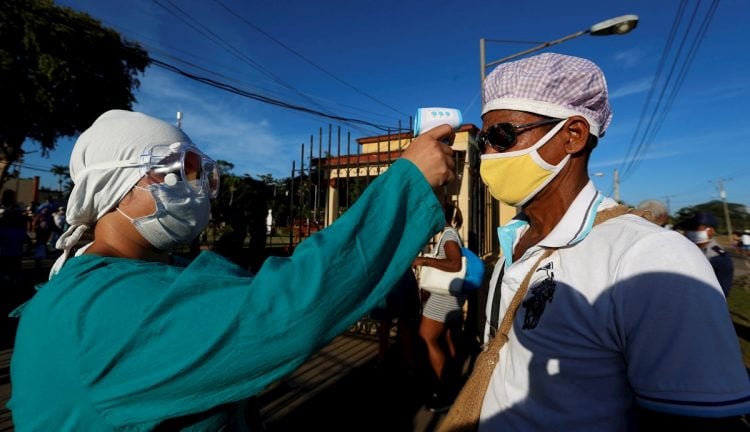 A health worker takes the temperature of a religious during her visit to the church of El Rincón, where a tribute to San Lázaro is paid, on December 17, 2020 in Havana. Photo: Ernesto Mastrascusa / EFE.

Cuba exceeded 10,000 cases of coronavirus since the beginning of the pandemic, with 131 infections reported this Saturday, a figure that marks a new record of new patients in a day for the Island.

In total, the number of infected amounted to 10,024, while the number of fatalities remained at 137 as there were no deaths from COVID-19 yesterday. In addition, 64 discharges were given, with which the recovered are already 8,976. The evacuees are still two.

Active cases are now 909, of which 898 present a stable clinical evolution, while 11 confirmed patients are treated in intensive therapies, three of them critical and eight serious, according to the most recent report from the Ministry of Public Health (Minsap).

The Ministry of Health also reports that 3,723 patients have been admitted for clinical epidemiological surveillance, 353 of them suspected, 1,889 under surveillance and 909 confirmed.

Meanwhile, the 131 new cases were detected after studying 12,052 samples, an equally record figure for the Island in one day. Of these infections, 33 are contacts of confirmed cases, 61 have their source of infection abroad, and in three the source of infection had not been specified.

A cup of coffee with Alicia: The memories, dreams and secrets of Ana Fidelia Quirós