A hundred Canadian travelers arrived this Friday at the Abel Santamaría Airport in Santa Clara, bound for the Rancho Luna and Cayo Santa María tourist destinations. 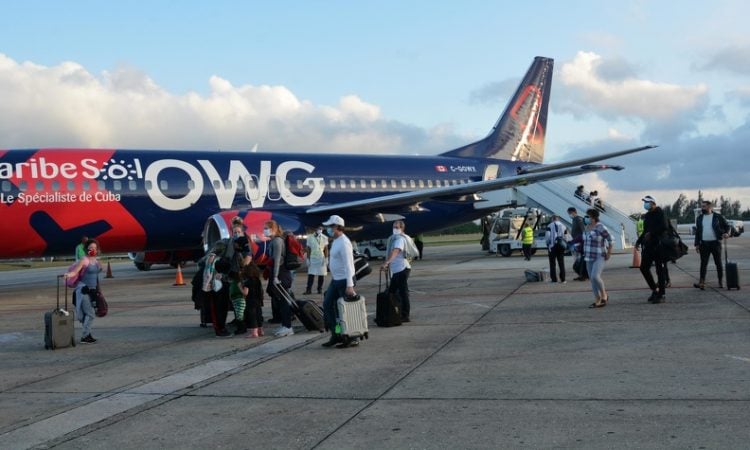 Arrival of the inaugural flight of Hola Sun and Caribe Sol tour operators with the airline OWG, from Canada, at Abel Santamaría International Airport, in Santa Clara, in central Cuba, on December 18, 2020. Photo: Arelys María Echevarría/ACN.

With the arrival this Friday of the inaugural flight of Hola Sun and Caribe Sol tour operators with the OWG airline, from Canada, to the Abel Santamaría International Airport, in Santa Clara, the return of international tourism to central Cuba began after the pause forced by COVID -19.

A hundred travelers arrived on board the aircraft from the Canadian cities of Toronto and Montreal. Of them, 42 headed to Rancho Luna beach, in Cienfuegos, while another 95 had reservations for the tourist destination of Cayo Santa María, north of Villa Clara, according to the Agencia Cubana de Noticias (ACN) news agency.

Esther Lidia Machado, main specialist of the delegation of the Ministry of Tourism in the province of Villa Clara, explained to the agency that the Playa Cayo Santa María Hotel is reopening with this group of tourists.

For her part, Malvis Oro, operations specialist at Havantur Centro―a Cuban travel agency ―reported that as of next Friday, two weekly OWG flights will arrive, one from Toronto and the other from Montreal, while this Sunday another flight with Canadian tourists is expected, this one with Air Canada, and another flight from Poland with Blue Panorama will arrive from Poland on Tuesday 22, both with an inaugural character.

The officials said that both the Santa Clara airport and the hotel facilities in the region apply rigorous hygienic-epidemiological measures to prevent the spread of SARS-CoV-2, and pointed out that in the coming weeks “a growing participation of airlines is expected for tourism, after the retention caused by the pandemic.”

This Friday, the Cuban Ministry of Tourism (MINTUR) also confirmed that in 2021 it will bet on “continuing with the vitality and dynamism of the sector and increasing the arrival of visitors to the destination,” according to another ACN report.

The Cuban authorities project the arrival of 2,200,000 visitors, double the expected for 2020 as a result of COVID-19, a year in which, however, it was possible to “generate significant movements in markets such as Russia, Germany and Canada,” according to Dalila Alba González, MINTUR’s Deputy General Director of Marketing.

The official pointed out that her ministry “is working intensively in the preparation of the 40th edition of the International Tourism Fair, FITCuba 2021, scheduled for May 3 to 8 in Varadero, in a context of new normality marked by COVID-19.”

In addition, she said that “with dozens of hotels certified as Tourism More Hygienic and Safer,” the MINTUR “has provided security protocols to preserve the health of both guests and its workers” in conjunction with the island’s Ministry of Public Health and the international health organizations responsible.

Coronavirus: Cuba exceeds 10 thousand cases with a new record of 131 infections in one day