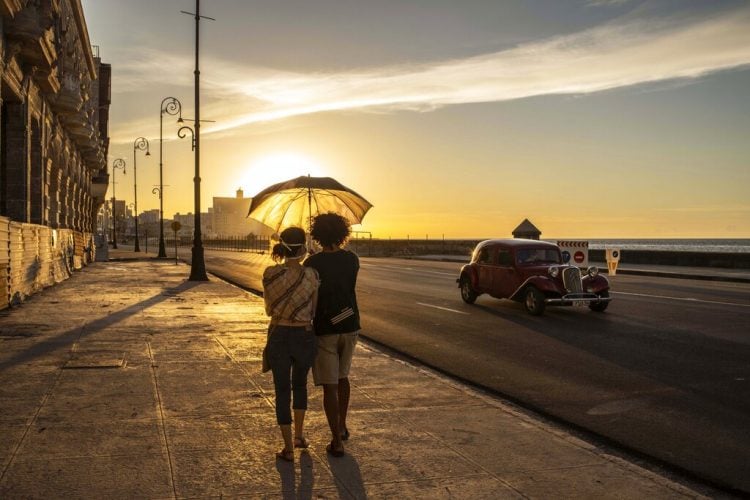 A couple wearing masks hold an umbrella as they walk along the boardwalk at sunset in Havana, Cuba, Monday, Aug. 31, 2020. Photo: Ramón Espinosa/AP

The COVID-19 epidemic in Cuba has already passed the six-month curve in the middle of a dangerous outbreak. Despite the measures taken on the island to prevent and control its spreading, and the indisputable success achieved in stopping a first wave, the disease is experiencing an expansion that keeps alarms on throughout the country, even though not all provinces today exhibit the same scenario.

Havana, which had become the epicenter of the epidemic early on, continues to be the most affected territory, with a wide spread of the coronavirus in its geography. However, in recent weeks the central Ciego de Ávila has shown a complex situation in several of its municipalities and, in particular, in the provincial capital. Other provinces such as Artemisa, Matanzas, Pinar del Río, Mayabeque, Villa Clara and, more recently, Sancti Spíritus, Cienfuegos, Holguín and Camagüey have also reported positive cases and remain in tension.

But how has the disease gotten to this point? What has been the evolution of COVID-19 on the island? Which are its advances and setbacks? What are the most illustrative figures of what happened for more than six months?

OnCuba invites you to follow a chronology of the epidemic in Cuba and review the country’s statistics up to September 15.

Asymptomatic at time of diagnosis

Progression up to six months

Total of cases up to six months:

Total of cases up to September 15:

Cases and deaths by age

Cases by province up to September 15

Records for one day

Epicenter of COVID-19 in Cuba

Day 11- Cuba reports its first positive cases: three Italian tourists detected while staying in the city of Trinidad, Sancti Spíritus province, the same day that the WHO officially declares the coronavirus pandemic.

12- First Cuban infected: a young man living in the city of Santa Clara infected by his wife, a Bolivian woman who arrived days ago from Lombardy, Italy.

16- The first case is reported in Havana: a 63-year-old man living in the municipality of Diez de Octubre who had previously returned from Spain.

18- Cuba reports its first death: a 61-year-old Italian tourist, one of the first three confirmed positive cases on the island.

18- Evacuation in the port of Mariel of the British cruise ship MS Braemar, with five confirmed cases of COVID-19 on board and a group of isolated people with suspicious symptoms. Travelers depart for London from Havana airport.

18- The Cuban government announces the cancellation of all ceremonies, events and historical commemorations of a massive nature.

20- Cuba evacuates an American visitor and decides to close its borders to tourism as of the 24th. Cubans and resident foreigners who arrive on the island must undergo a mandatory 14-day quarantine.

24- The Cuban government suspends the school year for a month as well as interprovincial passenger transportation.

24- The first recovered patient is reported: the Cuban resident in Santa Clara, the first case of a national.

28- The Cuban Minister of Public Health reports the first local transmission event in the country, in the municipality of Cárdenas, Matanzas, generated from an entertainer of a hotel in Varadero infected by Italian tourists.

31- The Cuban government announces the suspension of all air and maritime passenger traffic as of April 2, as well as the cancellation of the May 1 parade.

2- The El Carmelo People’s Council in Vedado is isolated, the first zone with restrictive measures in Havana.

7- The Cuban authorities announce that the island is passing to the stage of limited autochthonous transmission.

10- Higher Education entrance exams are postponed “until the coronavirus health situation (caused by the pandemic) allows it.”

11- The suspension of urban, inter-municipal and rural public transportation, both state and private, takes effect.

12- Cuba exceeds 100 recovered patients. For the first time, more than 2,000 PCR tests are performed in one day.

16- A transmission event is reported in a home for the elderly in the city of Santa Clara, the first in a social institution.

17- The Ministry of Education announces that the school year will not be resumed in classrooms and classes will continue on television.

23- Cuba registers six deaths, the highest figure for one day.

24- Cuba exceeds 50 deaths and registers its record of active cases in one day: 847.

5- The Ministry of Public Health announces the beginning of an investigation to study the sero prevalence (presence of antibodies) and prevalence of COVID-19 in Cuba.

22- All patients from the transmission event reported in a nursing home in Santa Clara are discharged. It left a balance of 19 workers and 47 sick elderly, three of whom died.

6- Cuba reports 22 contagions among the crew of a Cuban merchant ship, which arrived in the province of Matanzas from Mexico.

11- The Cuban president and prime minister detail on television the progressive plan for the return to normality on the island after almost three months of restrictions.

18- Cuba begins the first phase of post-COVID-19 recovery, except in the provinces of Havana and Matanzas. National tourism begins.

19- The Ministry of Education announces the restart of the school year on September 1 and the beginning of the new school year two months later.

20- The National Institute of Sports announces the beginning of the National Baseball Series on September 12.

23- Cuba registers a single case in the day for the first time since March.

25- The province of Mayabeque registers the first case in a territory in de-escalation.

1- Cuba officially opens its hotel facilities to international tourism in the keys adjacent to the island, although without confirmed visitors.

3- Havana enters the first phase of post-COVID-19 recovery and the rest of the country passes to phase 2, except for the province of Matanzas.

7- The first local transmission event opens in Havana, at the Pilar Atarés People’s Council, in Cerro, after the start of the de-escalation.

8- The province of Matanzas enters the second phase of the post-COVID-19 recovery and interprovincial transportation in Cuba is resumed, except for the routes to Havana.

19- Cuba does not register positive cases for the first time since the beginning of the epidemic and reports its lowest number of active cases (38) since March.

20- Cuba begins the third phase of post-COVID-19 recovery, except for Havana and Mayabeque. Artemisa registers an autochthonous case in the municipality of Bauta.

22- A local transmission event opens in areas of the Bauta municipality, the first in Artemisa province and outside of Havana after the start of the recovery stage.

27- Active cases in Cuba once again exceed one hundred.

7- It is announced that Havana is returning to the limited autochthonous transmission phase and Artemisa to phase 2 of the de-escalation, except for the Bauta municipality, which returns to phase 1.

8- Transportation is restricted between the five provinces of western Cuba, due to the outbreak of the disease.

26- The province of Ciego de Ávila again reports autochthonous cases, along with other territories in the country.

1- The school year restarts in Cuba, except for Havana and six towns of Pinar del Río, Artemisa, Matanzas and Villa Clara, with local transmission of the disease.

1- A night curfew and other restrictive measures come into force in Havana.

4- The first group of Canadian tourists since the start of the pandemic arrives in Cayo Coco.

5- Cuban baseball authorities announce that the National Series would begin without an audience in the stadiums.

8- The Cuban government decides to turn back the municipality of Ciego de Ávila to the phase of limited autochthonous transmission with a quarantine measure, and the rest of the province to phase 1 of recovery, in the face of the outbreak of the disease.

9- Cuba registers its record of autochthonous cases in one day: 91.

12- The Cuban government announces the suspension of interprovincial transportation from September 14 to September 30, due to the spread of the disease on the island.

13- Cuba registers its record of discharges in one day: 110, and surpasses 4,000 recovered patients.

15- The restrictive measures in Havana to control the outbreak of the epidemic are extended for another 15 days.