This Sunday surgeon Landy Rodríguez and general medicine specialist Assel Herrera will have been in captivity for a year, after their kidnapping by suspected members of Al-Shabaab in the Kenyan city of Mandera (northeast), near the border with Somalia and the target of numerous jihadist attacks in the past. 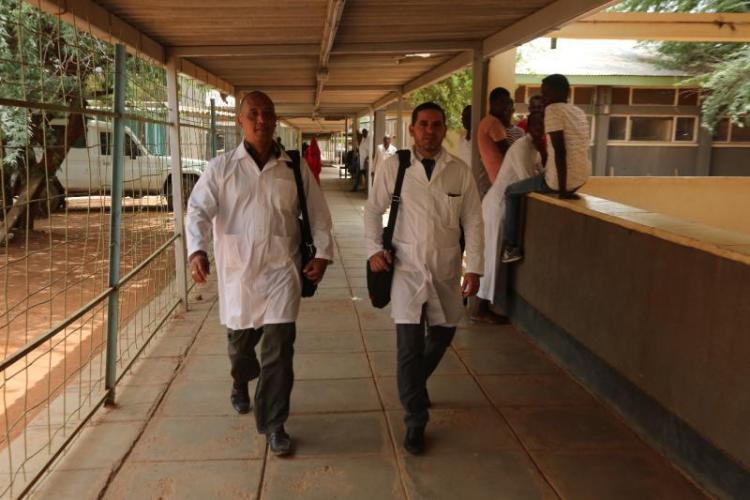 The two Cuban doctors kidnapped in Kenya by the Somali jihadist group Al-Shabaab this Sunday will have been a year in captivity in Somalia, while the Kenyan government reiterates that they are still “alive” and efforts to free them continue despite the coronavirus pandemic.

“We are working every day to ensure that they return home alive. We are very aware of what the families are suffering,” said the spokesman for the Kenyan Executive, Cyril Oguna.

This Sunday surgeon Landy Rodríguez and general medicine specialist Assel Herrera will have been in captivity for a year, after their kidnapping by suspected members of Al-Shabaab in the Kenyan city of Mandera (northeast), near the border with Somalia and the target of numerous jihadist attacks in the past.

On April 12, 2019, the two doctors were traveling, as usual, in a convoy to the Mandera hospital, accompanied by armed escorts, when they were intercepted after a shooting in which one of the guards who watched over their safety was killed.

Although Kenya mobilized the Army and Police to pursue the kidnappers, its troops “failed to provide an effective response to the attack and Al-Shabaab had all day to move the two kidnapped doctors across the border to their areas in Somalia,” as the security consultant Andrew Franklin, a former U.S. Marine settled in Nairobi since 1981, reminded EFE.

Since then, Herrera and Rodríguez have neither been seen in public nor have photos or videos been published that give an idea of ​​their fate.

“But it is a delicate operation,” said the spokesman, stressing that a hasty intervention “would not help,” hence the need to “plan meticulously.”

That no evidence of the doctors’ being alive has been released “is neither a good nor a bad sign,” Murithi Mutiga, director of the International Crisis Group (ICG) for the Horn of Africa, told EFE.

In any case, Mutiga said, “It is very encouraging that Al-Shabaab did not declare that it has killed them. Normally, when Al-Shabaab kills hostages, it makes it public. Therefore, at least that gives families some hope.”

Release in times of coronavirus

Like many other countries, Kenya currently uses its resources to combat the coronavirus pandemic with strict containment measures that reduce the mobility of citizens.

In this context, a question arises: is the health crisis going to have an impact on the plans to free the doctors?

“No. We have troops in Somalia that have been there for a long time and their efforts continue,” replied Oguna, referring to the deployment of the Kenyan army in Somalia since 2011, when it invaded that country in reaction to several kidnappings in Kenya attributed to Al- Shabaab.

“Part of our presence there is to ensure that we continue monitoring each movement and working with our partners, so that we don’t lose sight of the whereabouts of the two doctors,” added the spokesman.

However, a possible military operation to rescue the doctors is “a very unrealistic option,” according to Mutiga, who believes that “negotiations offer the most promising way to free the doctors.”

According to Franklin, “Well-informed sources indicate that negotiations are underway for a rescue between the Cuban government and Al-Shabaab. Those negotiations are being facilitated by several clan elders, although they have also attracted a myriad of negotiators and self-proclaimed intermediaries.”

“There is no doubt that Al-Shabaab sees the operation as a source of income,” said the former Marine.

Last May, traditional Kenyan and Somali elders who traveled to the Somali region of Al-Shabaab-controlled Jubaland to negotiate on behalf of the doctors claimed to have seen the doctors providing medical assistance to the local population.

According to the mediators, the kidnappers even demanded a reward of about 1.5 million dollars for their release, the Kenyan press reported at the time.

In that negotiation, “the commanders of the (jihadist) group did not consult with each other or decide on the release of the doctors, but to silence the elderly, they asked for millions of dollars as a ransom that the elderly, Kenya or Cuba cannot pay,” Mohamed Moalin, tax collector in Al-Shabaab-controlled areas in central and southern Somalia, said to EFE.

Moalin indicated that Al-Shabaab treats Rodríguez and Herrera as “war hostages” because it considers Cuba an enemy of Islam due to its support for Ethiopia in the conflict that it fought with Somalia between 1977 and 1978 in the dispute for Ogaden, an Ethiopian region of Somali population.

“That makes it very difficult for the case to be normalized at the civil level,” which has hampered talks with traditional leaders, argued the tax collector of the jihadist group, which joined Al Qaeda in 2012.

Meanwhile, he said, Al-Shabaab takes advantage of the doctors to care for its wounded and train its own doctors under the supervision of Xarasa guards, special security brigades that monitor the hostages’ movements.

The Kenyan government, however, continues to stand its ground: “We’ve never paid ransoms to terrorists and that position has not changed,” said Oguna.

Cuba, which maintains regular contacts with the Kenyan authorities, denied last year that the kidnappers had put a price on the release of the doctors.

Without going into details, the Cuban ambassador in Kenya, Ernesto Gómez Díaz, simply explained to EFE that currently “many efforts are being made that should lead to the liberation and return of the two doctors to their families.”

“We continue to make tireless efforts. The [coronavirus] pandemic has not stopped us from continuing to work. We are optimistic and we are sure that they will return with us,” said the ambassador.

Rodríguez and Herrera are part of a contingent of 100 Cuban health professionals―including radiologists, plastic and orthopedic surgeons, neurologists and nephrologists―who arrived in Kenya in 2018 through a bilateral agreement to improve access to specialized health services in this African country.

After the kidnapping, the Kenyan authorities relocated to safer areas the Cuban doctors deployed in Kenyan counties bordering Somalia, where Al-Shabaab is fighting to forcibly implant an Islamic Wahhabi-type (ultra-conservative) state.

Since the 1991 overthrow of dictator Mohamed Siad Barre, Somalia has been plagued by conflict and chaos, without an effective government and in the hands of Islamist militias and warlords.