For his part, Venezuelan Foreign Minister Jorge Arreaza "thanked the Cuban people and government for their permanent solidarity," according to an official note. 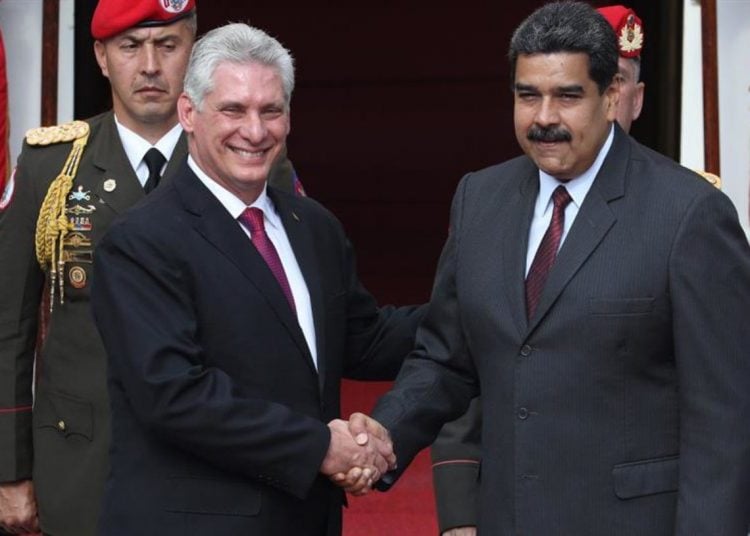 The presidents of Cuba and Venezuela, Miguel Díaz-Canel and Nicolás Maduro, greet each other during the official visit of the island's president to the South American country, in June 2018. Photo: Miguel Gutiérrez / EFE / Archive.

Cuban President Miguel Díaz-Canel and ex-president and leader of the Communist Party of Cuba (PCC) Raul Castro met with Venezuelan Foreign Minister Jorge Arreaza, to whom they reiterated their support for the president of the South American country, Nicolás Maduro, the official media reported this Tuesday.

Díaz-Canel and Castro received Arreaza on Monday night. The Venezuelan foreign minister arrived in Havana to participate in the 18th Political Council Meeting of the Bolivarian Alliance for the Peoples of America (ALBA), where one of the issues on the table will be the situation in Venezuela.

A statement published this Tuesday by the daily Granma says that the Cuban leaders and the head of Venezuelan diplomacy “agreed, in a fraternal environment, to highlight the solid links that unite Cuba and Venezuela” and “talked about regional and international issues.”

“Raúl and Díaz-Canel reiterated their support for the constitutional president Nicolás Maduro Moros and the civic-military union of the Venezuelan people,” while Arreaza “thanked the Cuban people and government for their permanent solidarity,” the official note states.

Venezuela is the main political and economic ally of Cuba, whose government supports Nicolás Maduro and has rejected the recognition given by a great deal of the international community to the leader of the Venezuelan Assembly, Juan Guaidó, as interim president.

The two countries have maintained a broad cooperation agreement since 2001 whereby Havana receives oil at subsidized prices in exchange for sending professional services to Venezuela, mainly doctors and teachers.

In recent months, the United States has increased pressure and sanctions on Cuba, a country it accuses of supporting and providing military, security and intelligence support to the Maduro government, something that Cuban authorities deny.

According to Washington, the Cuban professionals who provide services in Venezuela ―about 20,000― are mostly undercover agents, while Havana defends that they are professionals who are carrying out solidarity work in that country, especially in the areas of health and education.