How to achieve a rapprochement between the island and the United States was the subject of debate these days during several events in the U.S. capital.

by Marita Pérez Díaz
in Cuba-USA
0 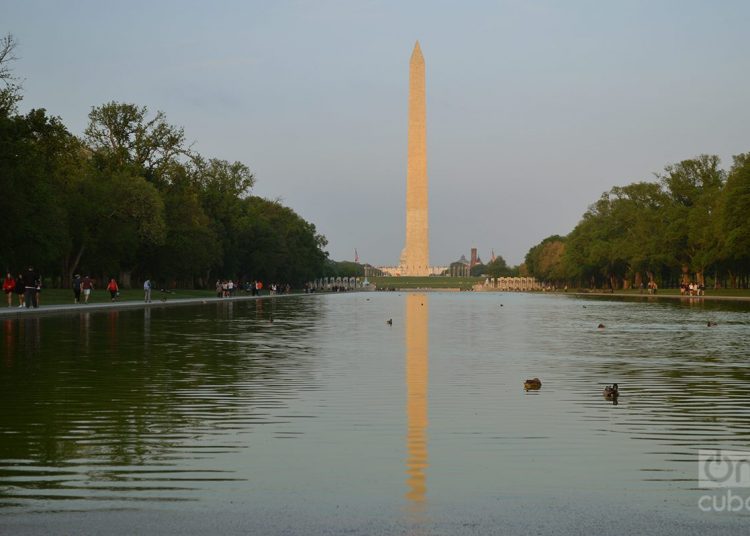 In an unfavorable political context, several events on Cuba are coinciding these days in the U.S. capital, in search of rapprochement and dialogue between both countries.

The week began with a celebration of Cuban culture organized by the Center for Democracy in the Americas (CDA), where politicians and representatives of diverse organizations attended a concert by Cuban singer Aymeé Nuviola.
Tweets by cda_dc

The CDA also organized a panel on civil society together with the Latin American Working Group (LAWG), Oxfam America, and the Washington Office for Latin America (WOLA).

The latter published on its web page that the purpose of the event is to know the impact on Cuban civil society “when Cuba is concluding its first year with a new president, has promulgated a new constitution and is adapting to the changing dynamics of U.S. policies.”

WOLA promulgates opposition to the “counterproductive U.S. embargo against Cuba, which has not promoted human rights, has done nothing to encourage political or economic reforms and, in turn, has isolated the United States from the region,” the organization says.

Teresa García Castro, WOLA Program Associate, told OnCuba that during the event they highlighted how the latest changes in Cuba policy under the Trump administration “only punish Cuban entrepreneurs and civil society.”

“Instead, a more constructive approach—one that encourages rather than discourages internal reform—would be to normalize relations between the United States and Cuba,” Garcia added.

Among the speakers was Camilo Condis, a private worker and manager of ArteCorte in Havana, as well as representatives of Oxfam, an organization that works directly in Cuba since 1993 with sustainable development and food security projects.

Linda Delgado, Oxfam America’s director of government affairs, commented that the organization is “deeply concerned about the negative impact on the Cuban people of the Trump Administration’s return to decades-long failed US policies toward Cuba.”

“The new travel and remittance restrictions will severely impact Cuban families, civil society, and the fast emerging private sector in Cuba,” Delgado told OnCuba, adding that these “policies toward Cuba are the wrong way to go in order to support constructive dialogue that engages diverse voices or to further sustainable development and social justice.”

“They are harmful and only create obstacles to further transformations in Cuba, as well as an affront to the wellbeing of families on the island,” she concluded.

For Emily Mendrala, executive director of the CDA, this is an important moment in Cuba and a critical moment for relations between the United States and the island.

“U.S. policies have acute and wide-ranging impacts on Cuban civil society, which range from impacts on livelihoods to space for public expression,” Mendrala said to OnCuba.

“This morning’s conversation highlighted for policymakers the extent to which U.S. policies of engagement can support Cuba’s civil society, and—to the contrary—the risks of policies of isolation,” concluded. Mendrala.

On the other hand, on Tuesday May 21 the U.S. Chamber Cuba U.S. Business Council held in Washington a Business Forum, where congresspersons, senators, businesspeople, as well as representatives of civil society from both countries participated.

Republican congressman for the 6th district of Minnesota, Tom Emmer, publicly thanked the opportunity to speak at the forum on “the importance of improving business relations between both countries and building a better tomorrow, together,” he said on his Twitter account.

The participants included Ambassador Jeffry DeLaurentis, former Charge d’Affaires (topmost diplomatic representation) at the U.S. embassy in Havana, as well as Patrick Leahy, Senator for the State of Vermont, another key figure in relations with Cuba.

Last February Leahy headed a bill against the embargo to allow freedom of export of U.S. agricultural products to the island.

Cuban-American Carlos Gutierrez, former U.S. secretary of commerce, recalled that “Cuba is the only country in the world, with exception of North Korea, where a U.S. citizen can’t travel freely due to outdated U.S. law.”

Yesterday, #Cuba Business Forum was well attended. Cuba is the only country in the world, with exception of North Korea, where a U.S. citizen can’t travel freely due to outdated U.S. law.

This “Cuba week” also coincided with the centenary of the building where the Cuban embassy is located in the United States, founded on a day like today in 1919.

José Ramón Cabañas, Cuban ambassador to the United States, recalled that in 1923 bilateral relations were raised to the level of embassies. “Let’s hope we won’t have to wait another 100 years to normalize our relations,” said the ambassador.