Audrey Azoulay and Díaz-Canel also highlighted “the priority given by both parties to the development of education, culture and science and the use of new technologies.” 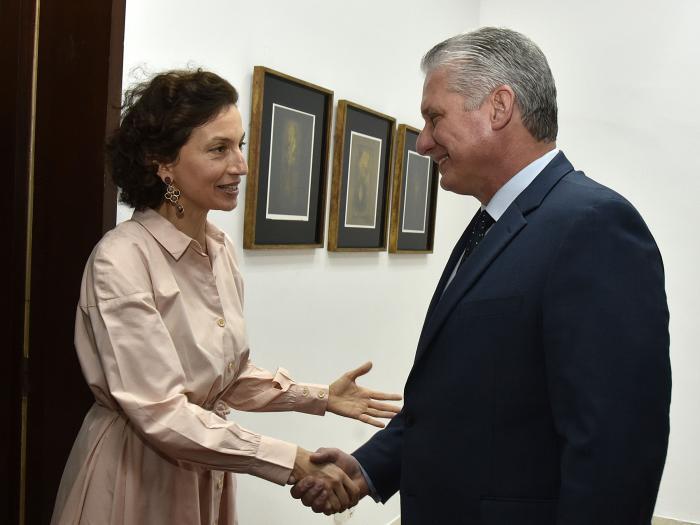 UNESCO Director-General Audrey Azoulay and Cuban President Miguel Díaz-Canel discussed relations between both parties and agreed to strengthen cooperation during a meeting in Havana this Friday, the state media reported.

Both leaders debated “on the state of the links between UNESCO and Cuba and ratified the will to continue working for their strengthening,” said the state news agency ACN, which covered the meeting to which the foreign press did not have access.

Azoulay and Díaz-Canel also highlighted “the priority given by both parties to the development of education, culture and science and the use of new technologies,” in addition to addressing “other issues related to the mandate” of the United Nations Educational, Scientific and Cultural Organization.

The director of UNESCO is on an official visit to Havana, where on Thursday she met with Cuban Foreign Minister Bruno Rodríguez to discuss bilateral cooperation on issues such as the struggle against the climate crisis and heritage conservation.

Azoulay also met with Havana Historian Eusebio Leal, a highly respected authority for his decisive contribution to the restoration of the capital’s historic center.

The director of UNESCO toured several sites of interest in that area and visited the Santa Clara School, venue of the Caribbean-European Union-UNESCO Project, which will host a heritage restoration training center for specialists in the Caribbean region.

She also participated in the closing session of the 2nd International School of Sciences of UNESCO, where representatives from 19 Caribbean countries addressed issues related to climate change.

Cuba joined UNESCO in 1947. Since 1994, both parties sponsor the UNESCO-José Martí International Prize, which rewards an extraordinary contribution to the unity and integration of the countries of Latin America and the Caribbean and to the preservation of their cultural and historical traditions according to the values ​​of the Cuban politician, writer and hero.

In addition, Cuba has 12 UNESCO chairs and six biosphere reserves of the UNESCO World Network in its territory.