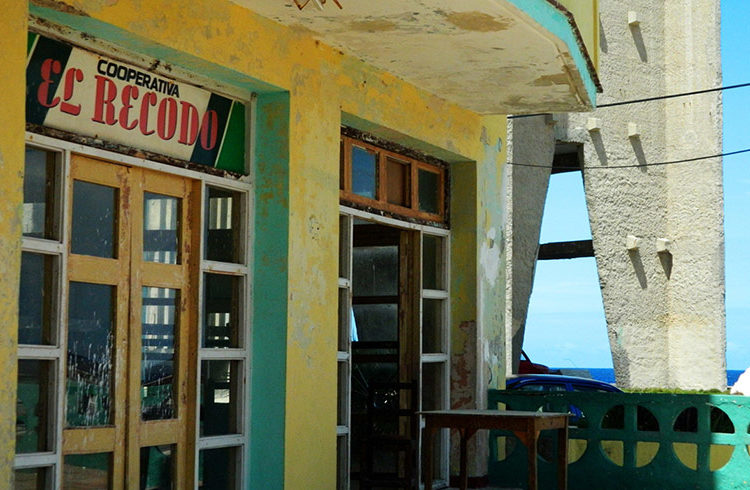 Currently the capital repairs of El Recodo are fully assumed by the partners through a bank loan; same variant was used by El Carmelo for some constructive improvements in its premises / Photo: Julio Batista.

Just over a year ago the first non agricultural cooperatives saw the light, a form to which clung to September 2014 a figure of 498 groups with the aspiration of economic improvements and direct participation in company profits. After this time, the vast majority is still committed to this adventure.

In the case of gastronomy, many have been the premises where workers took the risk of starting a new path, now as investment partners.

For years El Recodo was a hot spot for college students from the Lazaro Cuevas residence (F and 3rd) and recurrent oasis of national gastronomy –synonym of less expensive. However, from October 2013 the cafeteria went to the no state management model.

Since then the management of the premises-and all expenses-was taken over four partners who are committed to maintaining alive this narrow bar just steps from the Malecon. Lazaro Preval is one of them and says that all tasks are distributed: management, food processing and sale of products.

About his experience he says that, so far, the results are favorable “for both entities that advise us that for us as partners.” But he equally acknowledges that the main problems have been related to the supply of goods.

“There is a bit complicated. We still cannot make contracts directly with others and rely on the Gastronomy Plaza Company, but we find it insufficient. Moreover, the prices of the products we sell are high and to make the place ​​profitable we have to raise them. ”

Indeed this is a major concern of consumers who one day saw another raise of prices without explanation. And while it is true that changes have not been astronomical, neither has put a stop to such amounts.

Gloria Duarte is-from a long time- the warehouse boss of the Carmelo de Calzada (on 7th and D), and explains that “it is true that the usual suppliers make cooperatives a discount that ranges between 15.8 and 20 percent of the retail price when sold you need to increase it to get the utilities that allow the business to be profitable. ”

Regarding this issue, even when given preferential discount as cooperatives, the state has not set a price cap for the marketing of products and this is governed by laws that dictate competition and supply and demand. So the client is subject to the decisions of the sellers.

In addition, Lazaro and Gloria agree that sometimes the demand exceeds the supply facilities and this slows down the business. “There would be other options, such as eliminating the middlemen and give the possibility to make direct contracts with production companies, but with the current prices. This would allow much lower prices, even enough to be competitive against state businesses, it may be that they do not want that to happen, “Preval said.

Another issue is also logical costs for the investors: repairs, gas, electricity, invoices… to which are added directly related to the payment of personal income taxes and the rent of the premises now occupied. This has forced the cooperatives to multiply services.

In El Carmelo today there are several options ranging from “renting the premises for local weddings, sweet fifteens, activities for workplaces or shows up to its usual role as a restaurant. In addition, there is the possibility of paying by check or cash, something that every customer decides at his convenience, “says Gloria.

El Carmelo just started this journey last March 8, and so far none of their employees have abandoned ship. Alain Gonzalez was a bartender there before turning into a cooperative, and explains that “the transformation has not been spectacular, but it is understandable since we started not long ago and we still need to increase promotion, but the change is noticeable.”

He tells that prior to the investment made when they became a cooperative-and paid with a bank loan, the place was in poor condition, both physically and in the business issue, it had fallen far behind other businesses, even the state ones.

In addition, the young states that this was the reality for most of the restaurants and cafes that got the proposal of being included in this option, “to those who still have good clientele and significant gains have never raised the issue.”

After little over a year, those who have opted for the adventure of cooperatives in the gastronomic sector recognize that the reality is far from perfect. However, they all share the same opinion: they are better off as a cooperative.

State Gastronomy "on the left"