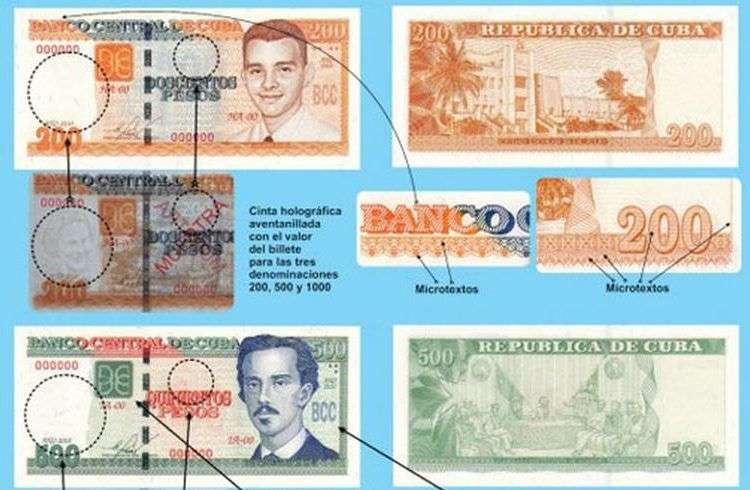 In Cuba the news, despite being serious, can be turned into joke by the public. So it is now. People, in frank display of national mischief, speculate and enjoy the “new” already announced: new high denomination notes in CUP with a value of 200, 500 and 1000 pesos began circulating around the country On February.

So far the highest bill in local currency was that of 100 CUP, that is, the equivalent of 4 CUC.

On Facebook, these were the reactions of some Cubans when knowing what would happen: “We will have large denomination notes. Now it is needed that wages to proportionally grow “; “J … says that they will pay us in January with a Mella bill and we no longer be paid until April”; or “I used to be happy when I earn ed in Cuba a wad of 20 pesos bill, now with only one my old salary is already paid. (Jokes aside: it is good news; I just hope that soon, once [that] market and productivity to improve, wages to rise and a thousand pesos note to stop being unattainable for some) “.

Until last week to buy, for example, a 200 CUC washing machine people went to a store carrying 5,000 Cuban pesos (CUP). If the cashier was lucky, that amount was paid with 50 bills of 100 pesos … but usually people pay with what they have: stacks including many, many, many notes of 50, 20, 10 and up to 5 pesos, the same used to pay wages in both the public sector and in self-employment .

The Central Bank of Cuba, in a press release, reported that the use of CUP in shops operating with CUC increased demand for high denomination notes. The new measure must streamline business operations and it is predictable a decrease in customers time to make payments, which will extinguish not few lines.

The main features and security elements of the new notes were published in the media, are glued to the windows of shops, toured Facebook and Twitter at full speed and appeared in the Resolution No. 4 of January 15, 2015.

Yaniuska Duvergel, a young Cuban resident in Italy since recently, comments: “For me those banknotes make no difference. This does not translate into a growing economy, greater investment in the creation of infrastructure for economic development, which is what does make a difference because the effect would be felt in the wages of the population. Those who would be benefited would be the accounting and finance staff as it will be easier to do the accounting. ”

The very morning of the news, in a P16, a bank worker commented that this would be well received because many people attend notary offices and banks with large sums wanting to buy houses and cars.

To illustrate the volume of such transactions, let us say that in the last five years 40,000 homes and 80,000 vehicles have been legally sold on the island, as stated Homero Acosta, Secretary of the State Council at the close of Abogacia 2014 International Congress.

“Almost always buyers go with two or three friends and relatives, to protect themselves, but everything will be easier with high denomination notes,” the economic said .

-Customers carry large monetary amounts “in conditions that are sometimes not optimal” because most sales are made with banknotes of 20 and 50.

-The sale of appliances is slow because, in addition to count those volumes of money, the workers have to fill an assurance model, other of property, and demonstrate that the equipment operates. But when customers must wait in long lines, they leave without buying.

-Cashiers in small outlets have limited capacity to save the amount collected, so several cash extractions are made during the day; which does not happen in large shopping centers where there are safe deposits for large sums. 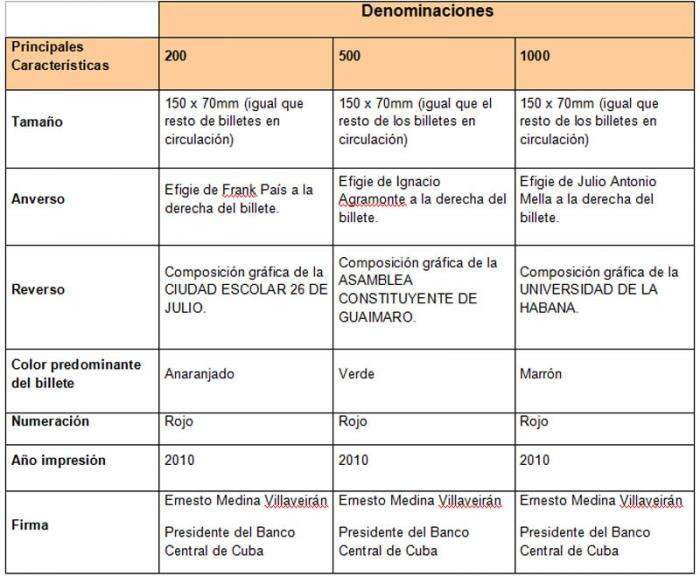 Some people interviewed by OnCuba in Havana expressed concern about whether this will affect the way of collecting wages, How will be assured the change for those who pay with 200 or 500 pesos bills if sometimes there is not for one of 50? What will happen when the ATM machine prompted to extract the entire wage and submits a 500 pesos bill that would surely be rejected in cafes and wineries? …

“My opinion is that it is ok the creation of high denomination notes to be used to buy expensive things in the shops because it saves time, but can you imagine if the ATM dispenses your salary into two notes of 200 or one of 200 and another one of 100 in my case, how and where do I change them? And do you think someone to steal from your purse one bill but a thousand one? I do not want to be in any of those cases. ”

An extension of the concerns was reflected by journalist Francisco Rodríguez Cruz on his blog Paquito el de Cuba, where he published the post Our salary can be paid with only one bill and we even have to give change. There he points out:

“The news on the issuance of new notes of 200, 500 and 1000 pesos had to be offered by the same journalists whose average wage in the country during 2013 was of 480 pesos and 61 cents, according to a national survey by the Association of Cuban Journalists last year. That is, as a rule, media professionals could be paid each month with a 500 pesos bill, and we still have to give change back. ”

Representatives of the Central Bank of Cuba and CIMEX, in an open web forum of Granma newspaper, responded that the payment of wages with the new money could be a traffic lane, the change in commercial units will be in CUC, that it is established not to register CUP bills –data are only taken when using 50.00 and 100.00 CUC notes- and at first, ATMs will not dispense the new high denomination notes.

Reinforcement of the use of magnetic cards and increasing ATMs were alternatives that officials acknowledged that could be implemented. However, they warned, this is not possible in the short term because technology infrastructure is not ready.

In the same forum, a commenter suggested that the Central Bank, in use of the exclusive right it has to issue banknotes and coins, should also put into circulation 40 cents coins (now discontinued) and many more of five and 20 cents for facilitating payments on the buses, wineries, etc … thus eradicating “the brazenness of drivers and salesclerks who have never change.”

Will there be inflation in Cuba?

Other users are concerned about an increase in economic inflation. In the blog De Chiripa, blogger Carlos Alberto Ramón Sanabria publishes the article ¨200, 500 and 1000 reasons to worry¨ and says: “New types of bills, of higher denomination than the existing ones, are issued only because the degree of inflation hampers monetary transactions “.

The economist Guillermo Andres Alpizar, who works at the Research Center of the World Economy, clarifies that inflation is the increase of prices in an economy and is measured through upward fluctuation of the consumer prices index, while if prices fall then we are talking about deflation.

“Measuring the evolution of prices in an economy is very complex. In Cuba, according to the National Bureau of Statistics and Information (ONEI by its Spanish acronym), there is not inflation, only at relatively low rates. The hardest inflation experienced in recent years was the one of the Special Period , when a pound of rice came to cost 150 CUP. Fortunately that was controlled largely thanks to the country’s monetary policy decisions and recovery. In this context, the new notes are just that, papers. What decides in practice is the relationship between the quantity of money in circulation and the supply of goods and services, “he explains.

What causes could foster an increase in the existing inflation?

So, where will prices have to go?

The problem essentially is not whether prices to rise. At first glance, it seems very good that prices to fall, but deflation could be as bad for the economy as an out of control inflation. For the population is much more important their real income to increase, i.e. it is important the existence of a controlled increase in prices, and that this increase to be proportionally accompanied by an increase in wages to expand the purchasing power over time.

Do you see as positive or negative the issue of banknotes?

It’s good, because it generally facilitates transactions in CUP and now constitutes an important step in the process of removing the CUC. Also, previously you had to use many CUP bills to buy things which prices are in CUC, and managing that volume of currency was cumbersome for both consumers and businesses . Now a change is proposed, but if by chance prices rise, the fault lies not with the new notes but can be attributed to other causes. We can not forget that higher denomination bills circulate in our country, as in quantitative terms a 100 CUC bill has a purchase power equivalent to 2400 CUP.

Issuing high denomination notes points out the way towards monetary unification in Cuba. The process began with the Guidelines issued by the Cuban government and Party in 2011 and have limit in 2016.

With a single currency and an exchange rate closer to equilibrium everyone wins, population, state enterprises, foreign investors, because it would be eliminated this current situation that is very distorting, two currencies, two exchange rates, which generates millions of inefficiencies, professor Pavel Vidal said in an interview with Progreso Semanal.

But for all this to work with CUP, this should be, like the economist says, a “credible CUC, with rules, transparency, statistics …” Money, ultimately, worth what is needed.

Cuban Americans celebrate rapprochement between the US and Cuba

Goodbye to Radio and TV Martí?

Goodbye to Radio and TV Martí?

Obama can "empty" the blockade