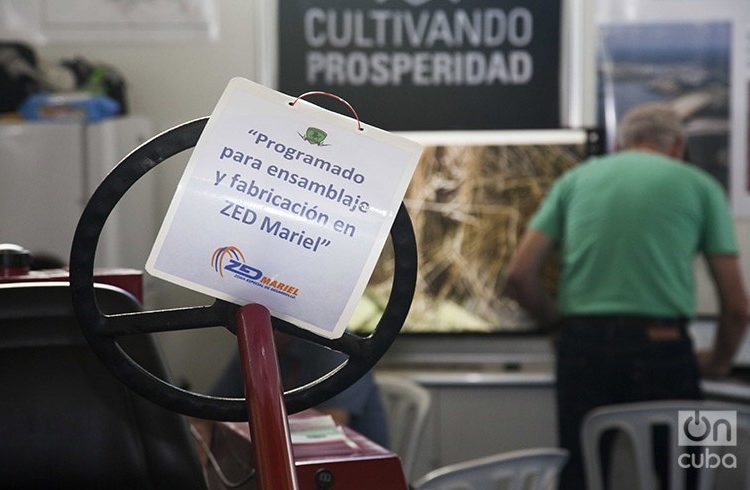 When Alabama-based Cleber LCC presented its “Oggun” tractors at the Havana Trade Fair in 2015 as the first U.S.-Cuba joint venture that would operate in the Mariel Development Zone, the news was welcomed with enthusiasm. But lacking the necessary permits from both Cuba and the United States, the project did not advance much further .

Now a recent announcement by the Department of the Treasury has brought the project back to life: the American side has granted the small company the licence it needed to file its application before the Cuban part at Mariel.

Saul Berenthal, a Cuban national who now resides in the United States, and one of the executives of Cleber LLC, talked to OnCuba about the process that led to this point.

In what sense are these tractors a solution tailored for the Cuban market?

The idea came from the business model of American agriculture in the 1940s and part of the 1950s, when small farms owned by families were a majority in the sector. Everything changed later on, with the emergence of large estates and the introduction of larger trucks.

We decided to use a design based on that old business model and upgrade it using modern hydraulic systems and engines. The model of tractor that we’ll be producing is efficient, cost effective and easy to operate. We don’t want to name a price yet, but in the U.S. one of these tractors would cost $8,000 to $10,000 dollars.

They run on oil or gas, but this is the Oggun 1.0; we are now designing the 2.0 version, which will be the same tractor but with an electric engine, powered by solar energy. Our goal is to make it not only more cost effective and efficient, but to replace the use of fossil fuels for renewable sources of energy – something that is in tune with Cuba’s view in this area.

How did you come up with the idea? Is this your first attempt at entering the Cuban market?

I came back to Cuba in 2008, because I wanted to understand what was going on here. I started to organize groups of American academics who wanted to travel to Cuba, and learn about the economy here.

In these trips I met many Cuban economists who were taking part in the redesign of Cuba’s economy, and studying the repercussion this would have on the Foreign Investment Law. That was a first step: becoming more familiar with the plans the country had for the future. Then the opportunity came with the announcements made by President Obama on December 17, 2014, especially with agriculture, construction and technology being prioritized areas in the relation between both countries.

We decided that the best and fastest way to achieve something would be to get involved in agriculture, making available a kind of technology that would help increase productivity. And what a best way to do that than using tractors that could be built in Mariel, used locally initially and then exported to other countries.

The parts to be assembled are going to be manufactured in Cuba or in the United States?

We’ll start with parts manufactured in the U.S., which will be imported to and assembled in Cuba. Then we will bring the necessary equipment to produce the parts here, using Cuban steel. The engine and the hydraulic system would still need to be imported, but in the future they could also be produced here.

Cuba’s Foreign Investment Law establishes that these joint ventures should create jobs, and contribute to the transference of state-of-the-art technology to replace imports with locally produce equipment. Another goal is to bring in management and trade expertise and experience. It will also include the use of renewable sources of energy, since the Oggun 2.0 is going to be an electric tractor.

All these elements are very much in line with the goals of Cuban authorities. Was that the key to become the first American company to get the go at the Mariel Development Zone?

Not just that, we have also created a framework for other American companies to come here, from other sectors, who could follow our steps in order to design successful projects.

We also tell them that their projects don’t need to include every aspect, they just need to be economically, socially and culturally relevant.

That means that any company wanting to do business in Cuba must be familiar with the Cuban society and its goals, in order to be able to contribute to those goals from a culturally-aware perspective. The name we have given the tractor model is an example of that: Oggun is the name of the god of metal in African-Cuban religion.

Your opinions are not common among Cuban-Americans, some of them could say that the reason for that is that you are too close to the Cuban government…

First of all, I don’t live in Miami, and I am not, therefore, involved in the political debate in Miami. We are not here to do politics, we are not linked to the Cuban government. Our production design needs to be aimed at self-employed people and cooperatives in Cuba in order to be authorized by the American government, that is, is was not design with the Cuban government in mind

A Cuban family could not afford one of these tractors at $8,000 or $10,000. Have you thought of solutions to this problem?

We are exploring different options so that farmers and cooperatives be able to afford them. Now people in the U.S. can buy tractors and send them to Cuba, so an option could be that instead of buying them in the U.S., the buyer decides to buy the ones produced in Cuba. That purchase could be covered by U.S. credits.

We are also in talks with financing companies from third countries operating in Mariel, that are willing to loan money to potential buyers, and we also know that Cuban banks are starting to make new funding options available to farmers and cooperatives.

Do you think the potential of Cuba-U.S. economic relations is a threat to Florida?

Cuba imports most of the food that is consumed in the country, and some people are concern that that could discourage the development of a sustainable national agriculture model.

Take the example of Cuban habanos: there are some good, prestigious brands that enjoy international recognition. Cuba’s organic farming could become as famous as Cohiba, and increase exports.

The cycle we are creating is also beneficial for the United Sates, because Cuba would then have the money to pay for those imports.

What are Cuban farmers expect from Oggun tractors?

Once we secure all the permits, the construction of the plant will take a couple of months only. The first year, we expect to produce 150 to 200 tractors, but that number will increase in the first five years until reaching 700 tractors per year.

There are two important issues to be taken into consideration: first, the paperwork, but most importantly, the U.S. presidential elections. In my opinion, that will be the deadline for the U.S. to realize that the embargo makes no sense from an economic point of view, or political or moral for that matter. It’s been used in the campaigns now, but once the new president is in office, it won’t matter. That’s what I think.