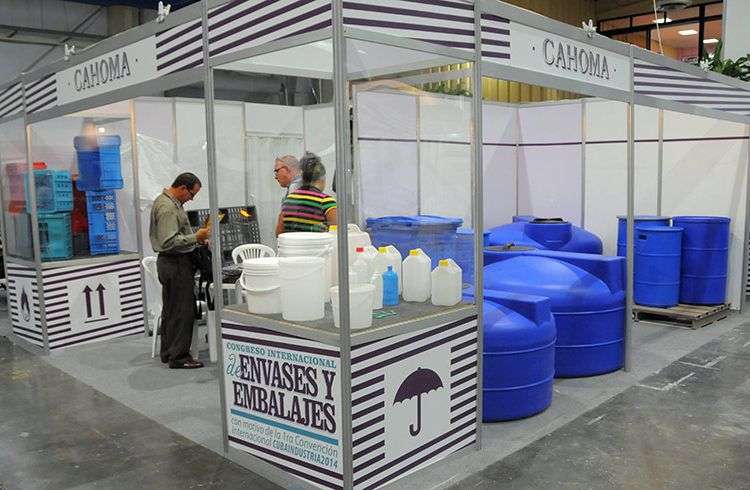 The packaging industry is another sector for potential investments in Cuba. Recently, as part of the CubaIndustria Convention, the 2014 Havanapak international conference devoted its discussions to raw materials, quality, design, logistics, warehousing, domestic and international laws, health fitness and advanced technologies.

This is one of the lines to where authorities recommend channeling new business in the Special Development Zone Mariel. According to what Juana Iris Herrera, director of Containers and Packaging Industries Ministry (Mindus), told the press, negotiations with the Brazilian company Odebrecht are underway in these moments to construct a plastic producing complex at the ZEDM.

The objectives would be to replace imports and, where available capacities, export to nearby markets. The project of a glass factory in conjunction with partners from Brazil is also evaluated.

Area A-8 of the ZEDM, with 239.8 hectares, is dedicated to the processing and handling of food products and among the facilities of the port there is a terminal for this purpose. Here packaging lines should be established in order to complete the production chain.

In addition, Act 118 includes among its priorities the industry in general, and within it, the food, pharmaceutical and biotechnology branches, activities that consume higher volumes of packaging in the country. Developing the manufacturing of these products means moving towards two objectives of the law: effectively reduce imports and increase foreign sales.

The food, pharmaceutical and biotechnology branches consume the highest volumes of packaging in Cuba.

These goals respond to the poor current situation. BioCubaFarma, for example, acquires from foreign suppliers 60 percent of the packaging it needs. Meanwhile, at the country level, buying the goods involved an expenditure of approximately $ 330 million in 2013, mainly in plastic and glass, and for 2014 they expect to spend 226 million pesos, since the domestic industry can supply only half of the demand.

These figures lead to exports of Cuban goods -cigars, rum, seafood, citrus and honey, in addition to vaccines and generic drugs, provide less profit because of its imported component. The production for the domestic market is also more expensive for that reason.

Based on a diagnosis of the present state of things, the last year Mindus updated its policy to revitalize the sector, which includes drawing up the relevant legal framework. These actions are connected to the boost the recycling manufacturing received in a little over a year.

The Geocuba and Labiofam business groups accumulate some positive experiences. The latter has a factory of plastic packaging used in its own manufacturing of cosmetics, biopharmaceutical, food, industrial products, and personal care and cleaning.

MEDSOL laboratories belonging to BioCubaFarma, has a plastic bottles plant designed to reach 100 million units per year. However, this production is for pills and medicines, so that does not meet the requirements with regard to high-tech drugs.

Although polygraphy reaches only 2 percent of businesses with foreign capital in Cuba, in this area there are four international joint ventures: Graphics Corporation Cuba, Durero Caribe, Compacto Caribe and Adypel; that generate much of the folding cartons, labels, ratings for cigars and cardboard boxes used in both the export and domestic markets.

Cuba belongs to the Latin American Union Packaging (ULADE), in the figure of the Research Institute for Food Industry. Exchange of knowledge and best practices, scientific-technical update, and contacts with business and academic partners from 12 other countries, are some of the possibilities offered by an organization of this type, whose membership should be used in all dimensions.

Broadly speaking, the packaging industry shows similar difficulties to the rest of the production structure underutilization of installed capacity, technological backwardness, lack of working capital and dependence on external supplies. Ricardo Torres, expert of the Centre for the Study of the Cuban Economy, believes that, globally, the country has undergone a sustained process of industrialization, from the modest levels showed towards the end of the eighties.

Exports of products such as cigars and rum contribute less profit due to the import of packaging.

“This is borne out in the first instance, from observing the downstream role of this sector in GDP, creating jobs and other relevant dimensions of development.” In this context they must devise and implement comprehensive policies towards national sufficiency and integration into international value chains.

Then, incorporating the emerging private sector has a place on the agenda. The non-agricultural cooperative Crea Entorno proposes an assortment of white ceramic packaging for honeys, jams and cigars. By its own craft features, these vessels could be used as souvenirs and gift items, plus the decor and design give them added value.

Its members also participated in CubaIndustria, where they were widely known, according to Teresita Gomez, president of the cooperative. From the results reported they plan to manufacture and repair the pallets used in the storage and transportation of containers.

These days they are established working contacts with the marketer of Apisun honey and the Chocolatería School plant, west of Havana. “Our production will not be massive, but it represents an important contribution,” says Gomez.

Using the Mindus and the Ministry of Economy and Planning help, they are looking to launch an oven of 27 cubic meters, which will allow them to produce each year, according to their estimates, between 30 and 40 thousand containers of different types.