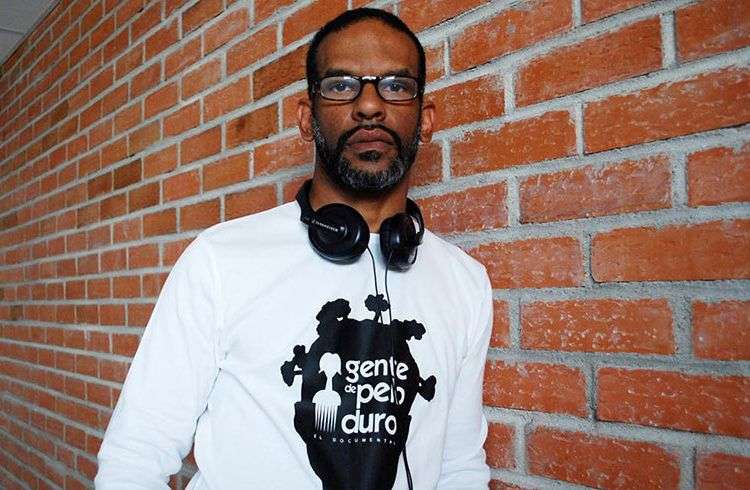 I have to confess I didn’t know Tony Romero, even though after going over his career I realized we had common elements regarding acquaintances and topics.

I got in touch with him by the twists and turns of virtual relations, and then I learned about the documentary he produced on famous Cuban announcer Eduardo Rosillo, an emblematic voice of our radio.

Tony Romero is currently living in Spain; he defines himself as “a black, Caribbean, Afro-Spanish manwho makes his own cinema, which comprises love for everything I am”.

I know you have come a long way as director and scriptwriter and you have taken part in productions by other filmmakers like Gloria Rolando. Could you comment on your reasons for championing the afro-Spanish subject matter from the visual front?

We have few spaces to talk about our issues, I have always been concerned about the spreading of our culture, our history which has not been told rightly, and I think it is not fair to keep our people in silence. That’s why, since more than 20 years ago, my main purpose has been to record our memories, our testimonies, documenting our history. We don’t have a long trajectory as other English or French-speaking black brothers do, but we are aware that our epoch is historically significant and we must grow as a community, create all possible links between Spanish-speaking afro people, in Africa and in the diaspora. Those are my reasons.

According to your experience, what does it mean for a Cuban to start as independent filmmaker abroad?

It is really hard, mainly because the cinema is about team work. When you move from an environment in which you have already established professional relations with technicians, actors, institutions and other production spaces, it is really complex to start from scratch, in my particular case as well as that of other filmmakers that have taken this road. Interpreting the codes of other cultural structures is always difficult, but I think the important thing is to have willpower and believe in your project.

I love Cuba and I am the result of a Cuban school, I always keep that in mind, but I’m also realistic and I think I belong here now when I look back and recall Oggun, un eterno presente, Los hijos de Baraguá or Las raíces de mi corazón, movies where I worked with Gloria Rolando, and then I take a look at my latest productions I realize my vision of the cinema has changed though the roots are there, the issue is there. I am lucky to have valuable referents such as Sara Gómez, Nicolás Guillén Landrián, Sergio Giral, Eliseo Altunaga, Nancy Morejón, Leyda Oquendo, all of them showed me the way.

Your documentaries are displayed in international festivals dedicated to the Cuban cinema. Are they also screened in Cuba?

Yes, some of my work has been screened in Cuba, in the context of the New Latin American Film Festival; the latest was Rosillo, gracias a la radio. I like my work to be appreciated in Cuba, though it is not as promoted as I would like to; that’s the case of other black directors as well.

In TR Movies we focus on a very particular idea of cinema, I think the cinema we do does not necessarily involves presentations in festivals or big promotion. Ours is an urgent cinema, looking for spaces for debates, trying to create a community, tackling awkward issues sometimes. The budget for our projects is always tight, but that’s the price for being 100% independent. We decide what to say and where to screen it. Havana’s festival is really interesting for me. Every time I go to Cuba I try to watch as many films by Cuban colleagues as possible. I also enjoy screening my work there. I think that’s a way of preserving our link and sharing experiences.

I have to say that Rosillo, gracias a la radio or Lo que me dijo Xiomara, respond to a need of talking about our dear island through its people. Eduardo Rosillo and Xiomara Alfaro are two great exponents of the Cuban culture. I believe that although most Cubans know them, they should never be forgotten. If this need brought together Cubans in and out of the island, I can only say I feel honored with having contributed to that.

Your next project, Gente de pelo duro, how do you propose to skip the stereotype in the title?

The black race is beautiful, as well as the white or Chinese race, each of them with its particular characteristics. In the case of black people, we are frequently unaware of our beauty given certain aesthetic patterns we have been exposed to for centuries, which make us hesitate about our authentic beauty, but it is necessary to regain and encourage our self-esteem as blacks, it is our identity and if we are not able to believe in ourselves as a race, others will hardly be able to appreciate our beauty. It is a long and tough battle because we are facing centuries of disdain towards black people.

I believe in people, in our humanity and I trust we will overcome those imposed patterns, in having enough clarity of mind to go beyond shallowness to find the necessary values so that the kind of hair doesn’t stand as a reason for being discriminated but for feeling proud. It is vital to boost respect through knowledge, to have a voice of our own so that we can all meet and talk about real equality.

The synopsis of that piece we will be able to enjoy soon reveals your interest in a phenomenon that is not only taking place in Africa but in Cuba, Jamaica, Germany, everywhere: the use of hair extensions. What do you have to say about this phenomenon in Cuba?

We are still victims of a colonial and racist mentality, we live in a world where stereotypes are increasingly gaining ground and appearances are more important than who you really are. Individuality is basically a crime unless it is backed up by money and then it is interpreted differently…
I have seen the women in my family straighten their hair in order to look presentable to society, I have heard many people talk about: “…improving the race…”, the classic joke on black people. I am familiar with that subtle racism; I am familiar with that mentality, which is common in the Cuban society.
That mentality has taken a step further, and I say this because within the diaspora there are successful figures like Beyonce, Rihanna, Michelle Obama, etc., black women in a position of power, women that know the history and the struggle of black people for their rights, but they are the ambassadors of a phenomenon that is affecting already the mother continent and attacks our identity. This is a complex issue with lots of reasons and points of views that trap us and leaves no choice for us as a group.
We need more Lupitas Nyong’o, people proud of their race who don’t spread artificial culture (fake hair, etc.) and other damaging attitudes that hinder our growth as a people. If we don’t love ourselves we cannot dream about a world free from discrimination. That is happening in Cuba and all over the world.