by OnCuba Staff
in Tourism in Cuba
0 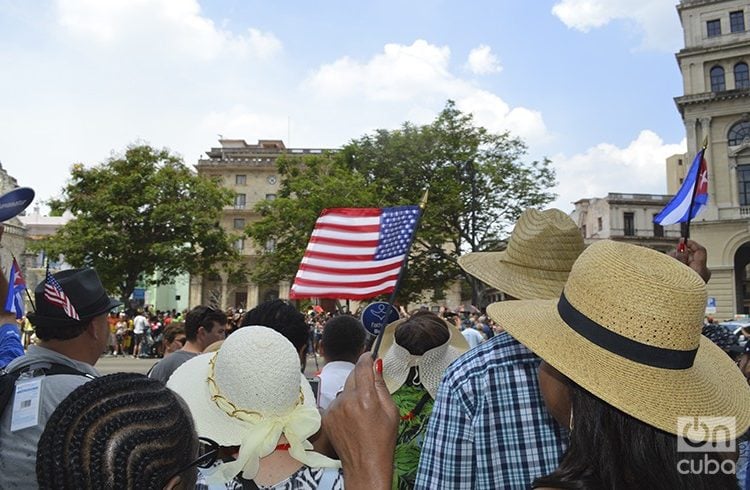 A “marked decrease” of U.S. visitors in recent weeks has been one of the first adverse effects of the current U.S. policy toward Cuba. Photo: Marita Pérez Díaz.

More than 40 U.S. travel companies and associations asked President Donald Trump to increase trips to Cuba instead of reversing them. The petition, signed by organizations like the American Society of Travel Agents and the United States Tour Operators Association, are seeking to influence the review of the policy toward the island being made by the current administration.

In a letter coordinated by Cuba Educational Travel, the signatories recognized that the increase of U.S. visitors to the island has had a “significant impact” on their businesses and the economy in general, not just because of the increase in revenues but also because it has made it possible to “hire more American employees.”

They add that “it has allowed U.S. officials to spend more time focusing on real national security threats, such as organized crime and terrorism, and not waste resources on investigating Americans who simply wish to exercise their right to visit our island neighbor.”

The travel companies and associations point out to Trump that the aviation agreements between both countries have reduced the price of travel to Cuba from the United States and offered more routes. In their opinion, this makes “travel to Cuba more orderly, convenient and safe, and has greatly increased the likelihood of U.S. travelers to visit the island” and “has made it easier for Cuban-Americans to visit their loved ones on the island.”

The letter highlights the economic support U.S. travelers to Cuba have provided to entrepreneurs and communities on the island. According to the text, the visitors “are greatly supporting the growth of the Cuban private sector,” building “important links” between religious communities, and provide “support to independent community organizations and cultural programs.”

The signatories consider that the travelers are their country’s best ambassadors, who “interact and develop meaningful relationships with Cubans at all levels of society and promote U.S. culture and economic interests, preserving business opportunities for U.S. companies currently losing out to competitors from other countries.”

That is why they are encouraging their government to take note of the “wide-ranging benefits” of the increase in travel to Cuba and to “prioritize economic growth and job creation” in the review of U.S. policy toward the island.

Collin Laverty, president of Cuba Educational Travel, affirms that today the demand for travel to Cuba has skyrocketed and that the interactions between the U.S. and Cuban people couldn’t be richer. A poll recently entrusted by his company to the Public Opinion Strategies Company revealed that 86 percent of U.S. travelers to Cuba believe their visits benefit Cuban citizens.

Meanwhile, Zane Kerby, of the American Society of Travel Agents (ASTA), commented that a recent study revealed that the U.S. people are in favor of lifting the travel to Cuba ban by 3 to one. He said that ASTA and its more than 9,000 members for a long time have believed that U.S. citizens deserve the freedom to travel throughout the world with no restrictions from their government. That is why his organization is requesting that Trump not only maintain the current regulations but that he also lifts the statutory ban on traveling to Cuba.

Meanwhile, James Williams, president of the Engage Cuba coalition, confirmed that the affluence of U.S. visitors to Cuba not only had created jobs in the U.S. tourism and travel sectors, but has also strengthened significantly the growing Cuban private sector.

Williams hopes that in President Trump’s final decision the opinion of an industry that supports 7.6 million jobs in the United States and of most of the U.S. public and the Cuban people will weigh more than that of a few politicians in Washington.

Last April, The New York Times reported, there was a “quieter” and “beneath the surface” debate about Cuba, where government agencies and lawmakers were debating in two directions: to continue or to reverse the road initiated by Obama with the island. According to the New York daily a group of lawmakers – Senator Marco Rubio included – have urged the White House to roll back in the process of normalization. On the other hand, a numerous pro-engagement coalition made up by lawmakers from both parties, businesspeople and young Cuban Americans is urging the presidency to continue building on the foundation it inherited.

Ever since trips and commercial restrictions between Cuba and the United States were relaxed, dozens of companies linked to tourism have started operating on the island. The Starwood hotel chain, several airlines and cruise companies like Norwegian Cruise Line, and travel agencies and platforms like TripAdvisor, Airbnb and recently Expedia offer these services.

U.S. citizens cannot legally visit the island as tourists, but can do so under the 12 authorized categories, among them people-to-people exchange and cultural, scientific, academic and sports trips. As a result, the demand to visit Cuba has multiplied in the last two years, making the United States one of the principal issuers of visitors to the island.

In 2016 more than 284,000 U.S. citizens traveled to Cuba, which together with the Cuban residents in the United States added up to a total of more than 614,000. The numbers registered in the first quarter of 2017 show that the growth is continuing.

With their letter to President Trump, the travel companies and organizations have joined the voices which are asking in the United States to maintain and increase relations with Cuba. In recent months, groups of U.S. congress people, businesspeople, farmers and retired military have expressed their being in favor of strengthening bilateral relations while the government insists that its policy toward the island is under review.

Searching for my father´s Cuba