Since the first measures were taken in Cuba to face the COVID-19 epidemic, the private sector has had to transform itself to stay afloat. 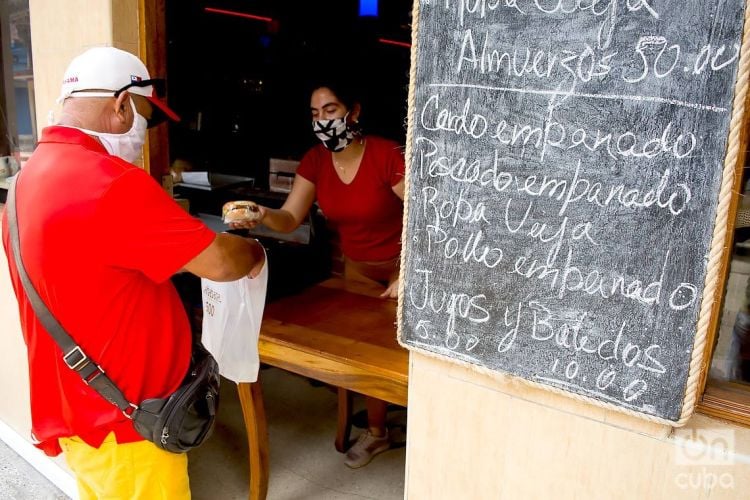 Since last March, the Cuban government started taking significant measures in several sectors of the economy and society to face the growing expansion of COVID-19 on the island. The health crisis has affected all sectors, also the private sector, which does not have the same benefits as the Cuban state sector.

The actions taken at that time, related to private enterprises (self-employed sector), included: the suspension of licenses for those who could not maintain their activities, with the consequent reduction of taxes; the postponement of the payment of social security without the special interests; meanwhile, the gastronomic services that saw their activities reduced by 50%, would pay only half of the contribution in the tax accounts and the corresponding tax payment.

Likewise, artists, creators and enterprises that were affected, could request deferments in the payment of taxes, among other agreements to decrease the tax burden that the National Tax Administration Office (ONAT) demands. These measures help to lighten the economic weight, but they are not sufficient to face the crisis.

The private sector is one of the most affected by the current situation in the country. The losses are already calculated in hundreds of millions of dollars in terms of the contribution to the state budget, without counting the individual damages for those who remain linked to this type of employment; for them and their families.

Many ventures have had to readjust to the current contingency, incorporating new services in the use of their resources. Cuber Taxi is a private transportation agency that manages to keep its employees active by using a messaging service for products from the agricultural market, an offer it has been diversifying.

“The idea emerged based on our clients’ need to manage their supplies and since we couldn’t provide regular taxi service, we decided to bring the products from the agricultural market to their homes, without any variation in the price of the product, just charging for the home delivery,” those responsible for this undertaking explained to OnCuba.

In addition to the products they mention, they incorporate other variants such as the delivery of cakes, an option that emerged on the occasion of Mother’s Day and that is maintained for the moment.

Although initially they worked through Whatsapp messaging, now they have diversified and have a website where customers can choose the offers of their preferences, a variant that will exist “as long as our customers request the service,” added the project leaders.

The home delivery alternative has been one of the most popular these days, where ventures such as Mandao Express are among the leaders of this modality in the country, establishing alliances between the businesses themselves, another viable alternative to subsist in the midst of the crisis.

The Andando cafeteria, based on J Street in El Vedado, was created to provide healthy products to residents of the area, which also includes centers of interest such as the University of Havana and the Calixto García Hospital. “However,” Javier Rodríguez Agramonte, owner of the business, tells us, “at the start of COVID-19 we underwent a restructuring, limiting the offerings to only juices and other fruit derivatives, changing the model to take-away food, or home deliveries.”

The readjustment of services is essential for establishments of this type to avoid the closure of activities and a possible economic failure. However, this sector remains closely linked to tourism, a source of income they won’t have access to for a long time, as everything seems to indicate.

Olivia Valdés, owner of a religious articles store in the border area between Centro Habana and Old Havana, proposes as a viable alternative “to relocate and offer some type of employment in sectors that remain open or to provide some type of support in others; there will be someone who doesn’t want it, but there are those who do need it because they don’t have any other income.”

“Another alternative would be, the same as was done with the stores in Tu Envío, to create a website with the self-employed where we all put our goods to sell them, with a messaging system.”

Food business owners employ many subcontracted workers, who have very few salary and social security guarantees in situations like the one the country is experiencing at this stage.

Amalia González is a young clerk and bartender who remains unemployed at home these days, waiting for a return to “normality.”

“Many of the self-employed workers in this sector basically earn from tips, in addition to a salary that is paid to us per month. In my case, all of this took me by surprise and all the money I had saved was obviously spent,” she tells us.

Her case is that of many workers in this branch of the economy. “Not only me, many people don’t have unemployment benefit or insurance for this type of situation, not even through the quarterly payment to ONAT do we receive insurance to be able to subsist at this time.

“We need options and guarantees. For example, the heads of these jobs, even though we sign a one-year contract, can unemploy you and we don’t have a stipend or settlement, we don’t have any type of benefit in this regard,” she pointed out.

One of the alternatives shared by this entrepreneur, would be that employers have to keep a record of what they pay as salary and in case of a situation like this, they should pay their employees an amount equivalent to one percent of that salary accrued monthly, for a period of 3-4 months, depending on what is stipulated in the contract.

Landlords have also been affected due to the absence of tourism, a key sector for the country’s economy in general. Several have had to hand over their licenses faced by the doubt as to when tourism will be restored on the island.

“I had to hand over the lessor’s license in foreign currency since before the measures were taken in Cuba because of the COVID, the eventual decrease in the entry of tourists to the country would cause the situation to worsen for me, since I am in the obligation to pay a tax even without receiving profits, although I have had to manage these payments in previous years during the low seasons, or in months with very little profit,” said Julia García, a landlady resident in the municipality of Centro Habana. This is one of the territories with the most licenses of this type in the capital.

“We are really in a big bind because there is zero tourism right now. We have a deposit in the Fiscal Account equivalent to two months of the payment of the fixed rate that we pay monthly. If we use that money to help us in this time of emergency, then what will happen to the other months ahead of us? I think that the self-employed will have to continue with the temporary suspension of our businesses. There is no other option,” said Lilisbeth Silveira, another of those affected by the current situation.

In the case of Marcos Álvarez, with a repair license for several appliances, the activity has been almost nil, “without much to tell,” he says, although it’s like that with everyone, with barely a subsistence economy, since nothing has been sold or repaired since March. “People prioritize the purchase of basic need products, so if an electrical appliance breaks, they leave it broken for now, because they need to establish other priorities.”

“A law must be created to protect us, just as there are for those who work for the government, such as the option of collecting a part of the salary when they are not working for justified reasons or when they are sick, something that covers some situation because of which we can’t work. We don’t have any kind of ‘luxury’ or protection,” explains young Amalia González, a resident of El Vedado.

Meanwhile, Javier Rodríguez, at the helm of Andando, proposes that “the government has to promote much more cooperation between state companies and self-employed workers, since the sale of raw materials available through national production are limited and unnecessarily complicate the simplest tasks. I hope the government realizes our importance.”

The private sector in Cuba is at a frank disadvantage to face the current crisis. Times of readjustments will come that will only be possible and sustainable as long as the public and private sectors achieve a balance, working together to boost the country’s economy, only then will it be possible to get out of this situation in the best possible way.

U.S. authorizes 3,600 charter flights to Havana for one year as of June 1