In the first weeks of April, “the demand for electric power has exceeded what is normally consumed in the summer months,” reports the official Granma daily, which calls on the population to “increase electricity saving measures to avoid annoying blackouts.” 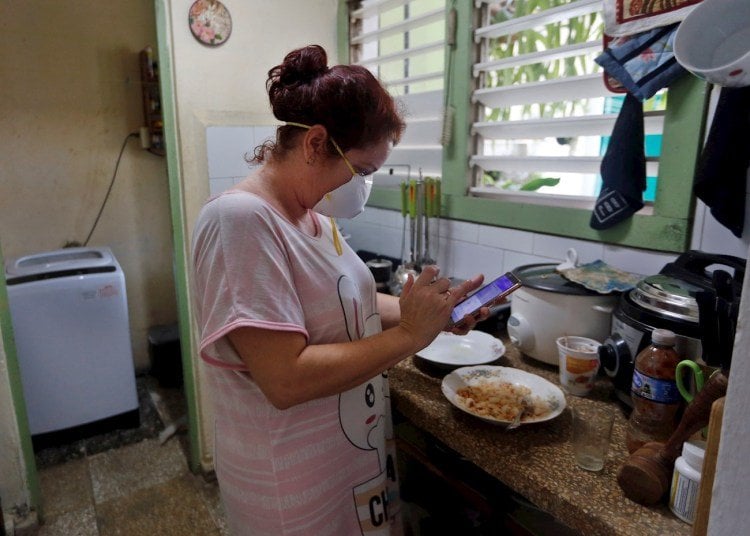 A woman checks her phone in the kitchen of her home on April 6, 2020 in Havana. Photo: EFE/Ernesto Mastrascusa

Electricity consumption has skyrocketed in Cuba during the month of April, which generated an alert from the Cuban authorities to the population to encourage energy saving.

In the first weeks of this month, “the demand for electric power has exceeded what is normally consumed in the summer months,” the official Granma daily reported.

The publication indicates that, according to the National Energy Council, “what was planned for the mid-day peak at the country level, at this stage of the year, is not being met by 20.6%, a figure that represents 421 megawatts above the plan.”

It also affirms that “at the national level the plan is not being fulfilled by 5.3%, which represents an overconsumption of 9,516 tons of fuel.”

This is taking place at a time when a greater number of people remain at home during these hours, as a result of the measures adopted by the government to confront the COVID-19 pandemic.

These include the suspension of classes and non-essential work activities, as well as events and public transportation, which makes many Cubans spend more time at home, something that, in addition, the government itself has insisted as a preventive measure.

Added to this are the high temperatures recorded so far in April, unusual for this period of the year, including two absolute national records―the last of them 39.7 degrees Celsius―and other records for several territories on the island.

Given the increase in electricity demand, the authorities are analyzing “the measures that could be adopted to decrease these figures,” particularly in the residential sector, “taking into account that it is in homes where the highest consumption is reported, with values ​​of 68%,” according to Granma, which does not specify the measures analyzed.

However, the daily provides a worrying clue in its report’s caption, in which it is stated that “Cuban households must increase electricity saving measures to avoid annoying blackouts.”

In this sense, Granma quotes statements by Minister of Energy and Mines Liván Nicolás Arronte, who urged the population “to shift the times for cooking food in the home and balance domestic activities so that not all of them are carried out at the same time.”

He also points out that the historic Commander Ramiro Valdés, deputy prime minister of the country, called “for the control and rational use of energy at a time when the entire country is focused on facing the pandemic” and said that “it is not just creating awareness, but translating it into results.”

In addition, he emphasized “the fight against illegalities in the sector and to implement best practices and experiences, many of them applied in the fuel contingency of September 2019.”

At that time, in the second half of last year, the island had to adopt a group of measures in the face of the fuel deficit suffered by the increase in sanctions by the United States government. Then, it had to reduce transportation and a group of activities, but it avoided the massive application of the dreaded blackouts, common during the crisis of the 1990s and in other periods of economic difficulties.

Screenings from cell phones in Cuba